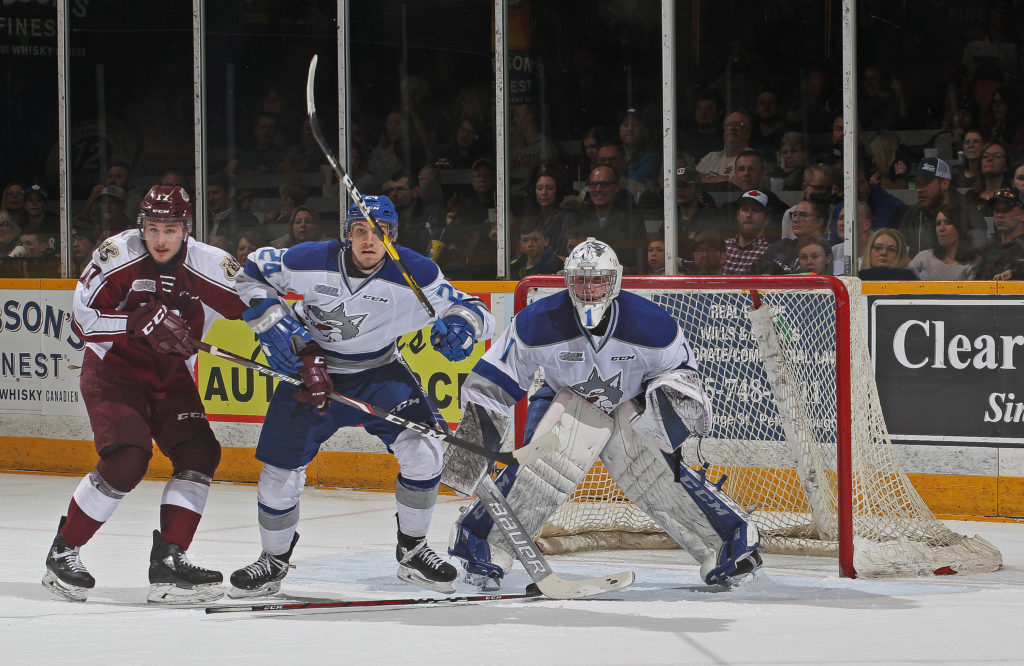 The Peterborough Petes clinched a playoff spot for the second consecutive season prior to Nick Robertson’s four-point performance (2G, 2A) as the Maroon and White skated to 5-2 victory against the Sudbury Wolves in front of 3,764 fans at the Peterborough Memorial Centre on Family Day.

Just minutes into the matinee tilt, the officials raised their arm and whistled Peterborough for slashing. A turnover while on the penalty kill allowed Blake Murray to solve Minnesota Wild prospect Hunter Jones to notch the game’s first goal.

The Petes were quick to respond when Robertson set off the Petes goal horn when he used his lethal wrist shot to beat Christian Purboo glove side to tie the game 1-1. The Toronto Maple Leafs extended his point streak to 18 games with his 45th goal of the season.

Peterborough continued to pressure the Wolves which led to captain Zach Gallant jumping on Peterborough native Matt McNamara’s point shot to give the Petes a 2-1 lead. The play was orchestrated when Semyon Der-Arguchintsev entered the offensive zone, made a quick pass to McNamara who fired the puck on Purboo. Gallant out-muscled a Wolves defender to notch his 28th goal of the season as McNamara and Semyon Der-Arguchintsev picked up the helpers on the goal.

So far, the Maroon and White were having a fun game on Family Day as they finished the first 20 minutes ahead on the score clock, outshooting the Wolves 12-8 and dominating in the face off circle.

Havin’ fun on Family Day! We’re up by 1⃣ after 2⃣0⃣!#GoPetesGo pic.twitter.com/APCpH10rOc

Halfway through the second period, Robertson decided that one goal wasn’t enough as he notched his second goal of the afternoon and moved into first place in the league with 46 goals. Gallant entered the Wolves’ zone and made a drop pass to Robertson and he wasted no time firing it past Purboo for a 3-1 lead. McNamara picked up his second assist of the game on the play.

ROBBY’S RACKIN’ EM UP! @zachgally drops the pass for @nickrob2001 who releases an absolute laser to beat Purboo for his 46th of the year! @mattmcnamara23 gets the second helper. 3-1 Petes!#GoPetesGo | #LeafsForever pic.twitter.com/5rSZtMAwC3

Just before the period expired, a passing play between the Wolves’ Kosta Manikis and Owen Robinson in front of Jones and a tired Petes line led to Owen Gilhula cutting the Petes lead 3-2.

The Petes and the Wolves traded goals in the second, but the Lift Lock Lads were leading on the score clock, in the face off dot and in shots on goal 23-18.

The Wolves are on the hunt for the lead but we’re holding on to it!#GoPetesGo pic.twitter.com/hWKudCOwaV

Peterborough found themselves down a man when they were penalized for holding the stick but that didn’t phase them as Robertson out-hustled three Wolves and made a pass to Liam Kirk who was all alone in the slot. The Maltby, England native made no mistake and beat Purboo high glove side to give the Petes a 4-2 lead. Hudson Wilson picked up on the secondary helper on the shorthanded goal.

The Petes kept their foot on the gas when a power play opportunity was presented to them. After numerous chances and set ups, Gallant redirected David Maier’s wrist shot from the point to cushion the Petes lead 5-2. Robertson picked up his second assist of the game on Gallant’s second goal of the afternoon.

Wolves bench boss Cory Stillman opted to pull Purboo for the extra attacker but Jones stood his crease to seal the Petes first win against the Wolves this season.

Final shots were 33-28 in favour of the Wolves. Robertson, Gallant, and McNamara were named the game’s First Choice Haircutters first, second, and third stars of the game, respectively. The Mark’s Hardest Working Pete was David Maier.

The Peterborough Petes take the ice on Thursday, February 20 at 7:05 PM to take on the Hamilton Bulldogs. Fellow LA King prospects Akil Thomas and Arthur Kaliyev look to go head-to-head as the team’s top scorers, respectfully.