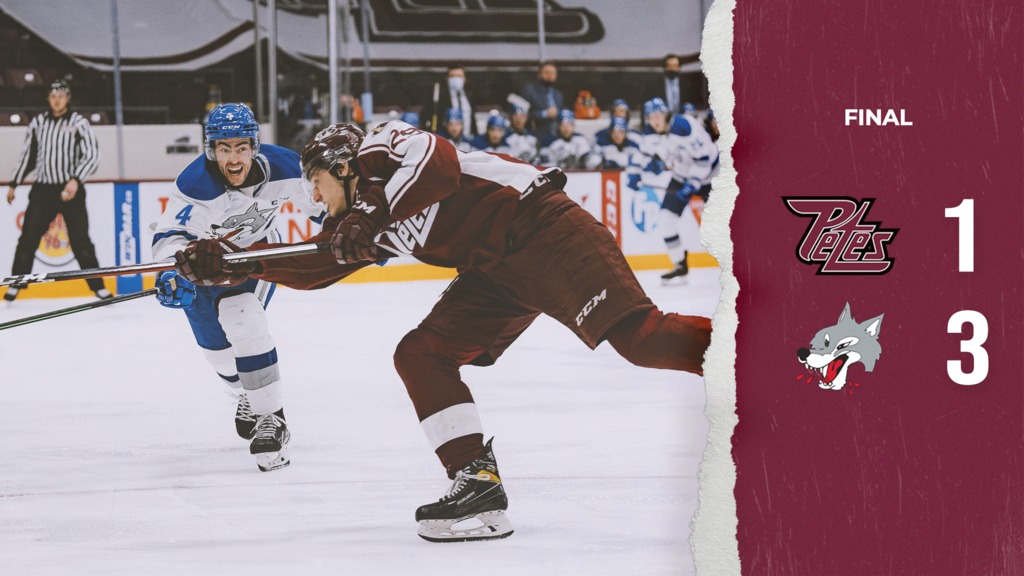 Tye Austin started in net while Mitchell Weeks filled the crease for the Wolves. Both teams went on a early power play, but the penalty kill specialists shut down opportunities across the ice.

All speed, no quit 💨@joe_carroll19 banks in his own rebound for his 11th goal of the season to cut the Wolves lead in half! 🚨#GoPetesGo | @SUBWAY pic.twitter.com/7aJvWVFKBA

A defensive break resulted in Sudbury’s game opening goal at 11:28 of the first period. A pass chipped off Samuel Mayer’s stick that landed on the forehand of Kocha Delic, was quickly whipped past Austin giving him, his ninth goal of the season. He was assisted by Liam Ross and David Goyette. The Petes generated momentum heading into the first intermission, pushing the majority of the possession into the Sudbury zone. Shots favoured Peterborough 12-10 after 20 minutes.

Ross recorded his fifth goal of the season to double the Wolves’ lead halfway through the middle frame. After Austin made a sprawling save on Dominik Jendek, the puck bounced to the front of the net where Ross was there to capitalize. After head coach Rob Wilson gathered his team on the bench, the mighty maroon and white got on the scoreboard. OHL veteran Joe Carroll scored to trim the deficit in half, 2-1.

The physicality picked up in the third as lots of shoves and words were exchanged following whistles.

Stillman was present all over the ice. He battled and was utilized on the penalty kill effectively. He ended his Petes debut with one shot on net.

#NJDevils prospect @chasestillman61 tells @petedalliday & @ScottArnold12 about getting traded to his hometown, having a fresh start, and reveals the first thing he did in Peterborough following Monday’s trade⤵️ #GoPetesGo pic.twitter.com/gIkxBgdEUY

JR Avon was nearly impeccable between the dots, winning 17 of 18 draws. He also drove offence with three shots against the Sudbury net. On the back end, Donovan McCoy set a career high five shots on goal. The Lift Lock lads came so close to tying the game with a minute left in regulation, but the puck banged off the post and was picked up by Sudbury’s Jacob Holmes who launched it into the empty net to seal Peterborough’s loss, 3-1.

The Petes hit the road for a matchup against the Ottawa 67’s tomorrow night.