Petes Come from Behind to Cage Bulldogs 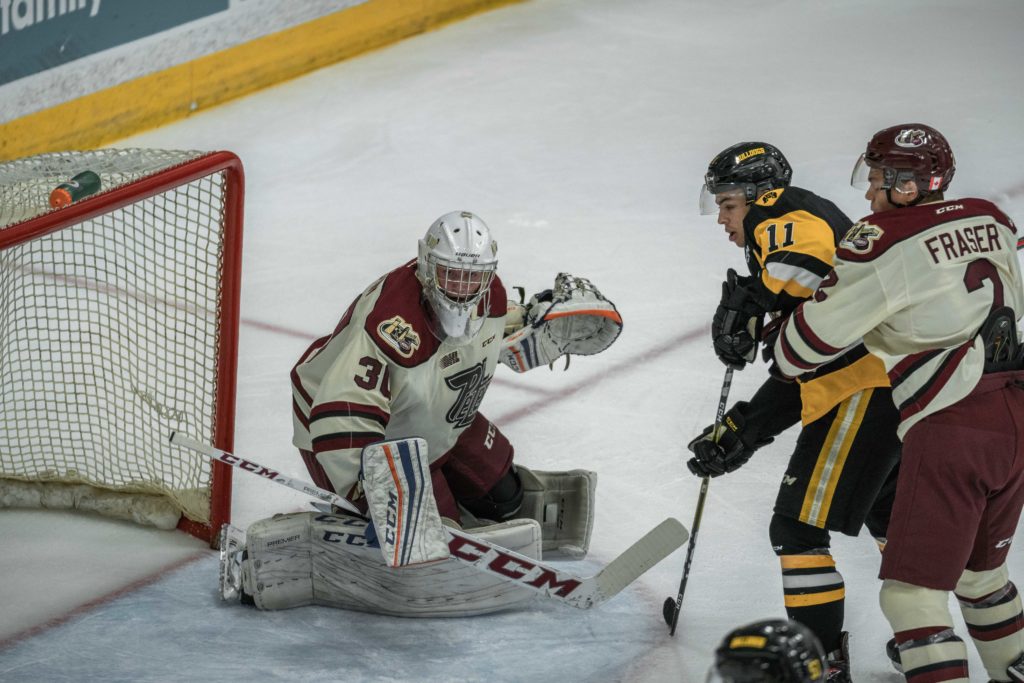 Max Grondin recorded his first OHL hat trick and Tye Austin made 29 saves to earn his first OHL win in a 6-3 come-from-behind triumph over the Hamilton Bulldogs on Sunday afternoon, marking their third straight win.

Toronto Maple Leafs prospect Nicolas Mattinen would open scoring for the Bulldogs. After a clearing attempt gone wrong, MacKenzie Entwistle skated the puck into Peterborough’s zone before dropping it for Mattinen. The 6’5″ defenceman released a shot from the point that fooled Tye Austin, giving Hamilton an early 1-0 lead.

After offsetting unsportsmanlike conduct minors for Mattinen and Max Grondin after a scuffle in front of the net, Peterborough was awarded their first man advantage of the afternoon as Hamilton’s leading scorer, Brandon Saigeon, was charged with cross checking, but the Petes couldn’t convert.

Through 20 minutes, the Bulldogs held the lead on both the score and shot clocks.

Looking for a little more offense through the final 40.#GoPetesGo pic.twitter.com/7vyIzIenpq

A rousing speech must have been given during the first intermission because the Petes scored an equalizer just 1:32 into the second frame. Nick Isaacson played the puck back to Matt McNamara on the blue line for him to dump into the opposite corner. Austin Osmanski picked up the rebound off the boards to beat Zachary Roy, scoring his second of the season.

Hamilton was given a four-minute power play as Cameron Butler was assessed for slashing and unsportsmanlike conduct. A strong penalty kill effort by Austin and the Petes, including a big save and clearing of the puck by Cole Fraser, kept the game tied.

Just before the mid-way point of the game, Entwistle was gifted a turnover in the neutral zone. He moved the puck to Arthur Kaliyev who broke into Peterborough’s zone with some fancy footwork. He sent the puck towards the Petes net and Entwistle redirected it past Austin to restore Hamilton’s lead.

The Bulldogs would add to their 2-1 lead after successfully killing off two Petes power plays. After an incredibly athletic initial save by Austin, Kaliyev put the puck back in front of the net for Navrin Mutter who snuck in back door and batted the puck out of the air and into the net. Saigeon collected the secondary assist on the play.

In the final minute of the middle frame, recently acquired forward Max Grondin put on a display of speed and strength to cut Hamilton’s lead to 3-2. Osmanski sent a stretch pass off the boards to Grondin who was able to use his size to get around the d-man and his skill to pull the puck to his backhand, sending the puck past Roy.

MAX! 😲 What a rush and what a finish by @GrondinMax after taking a pass from @aosmanski36 to bring the Petes back within 1! 3-2 Bulldogs.#GoPetesGo pic.twitter.com/k5HG498KAs

Hamilton continued to dominate the shot clock through 40 minutes.

The clubs would exchange penalties before the Petes exploded for four third period markers.

Liam Kirk tallied his seventh of the season and fifth in three games ten seconds into Peterborough’s fifth power play of the day. He used a Bulldogs’ defenceman, who was parked in front of the net, to redirect the puck over Roy and to tie the game at 3. Erik Čermák and Brady Hinz registered the play’s assists.

REYT GOAL, KIRKY 🇬🇧! @kirky_1424 puts the puck off the defender on the PP to tie the game at 3! He’s got goals in 3 straight games! @CermakErik + @BradyHinz record the assists.#GoPetesGo pic.twitter.com/CRWwTXCCW5

A beautiful between the legs pass from rookie Cam Butler assisted Grondin in putting away his second goal of the afternoon, as a one-handed feed from Čermák got the play going.

Grondin secured his first OHL hat trick a few moments later, this time with help from Čermák and Hinz who found him alone in the slot.

An attempt by the Bulldogs to pull Roy and add an extra skater went awry as Declan Chisholm fed the puck to Semyon Der-Arguchintsev who sailed it into the empty net.

SDA! Sammy seals the 6-3 win with an empty netter! Another assist for @chis_decs.#GoPetesGo pic.twitter.com/IAPJkiwLGW

The Petes return home to clash with the North Bay Battalion at the PMC on Thursday, November 29 at 7:05pm. Tickets are available through the Collins Barrow Box Office in person, over the phone at (705) 743-3561, and online.