Petes Come Back to Win Against North Bay 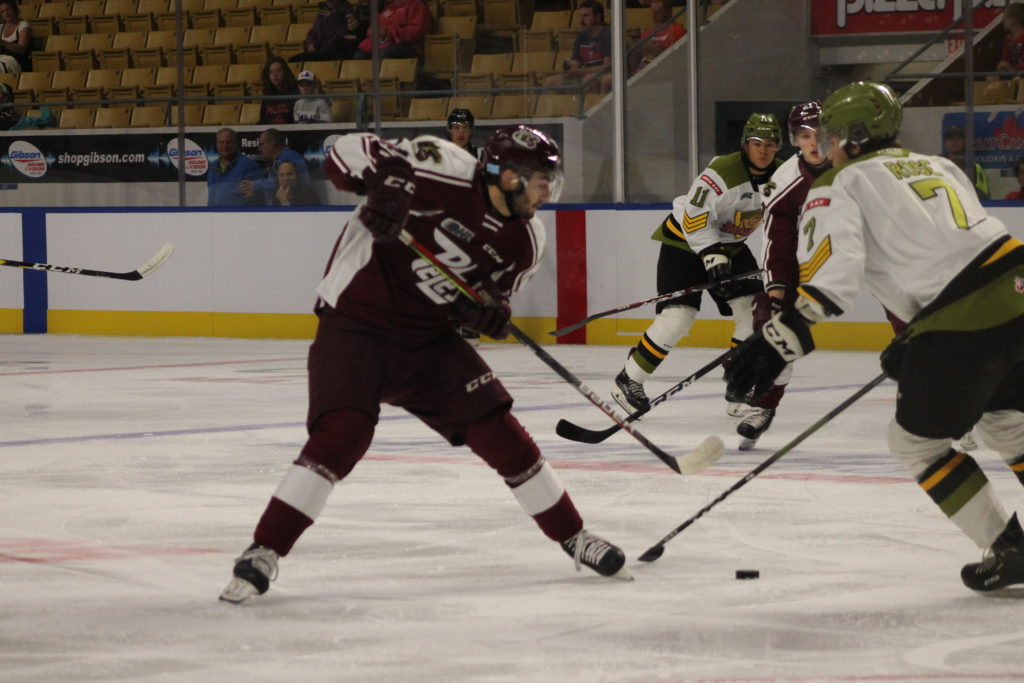 The Petes Pre-Season presented by CIBC Wood Gundy Peterborough continued its hot start as the Maroon and White battled hard from a two-goal deficit, to a 3-2 victory over the North Bay Battalion in Kitchener on Saturday afternoon.

The Petes came out rolling as they looked for their second consecutive victory with gaining immediate zone entry and cycling the puck in the offensive zone for the first two minutes of the game. The Petes were then penalized for tripping shortly after.

During the penalty kill, Avon used to his speed to get around a North Bay defender, who interfered him and we went on 4-on-4 hockey for 20 seconds. Despite numerous chances after 4-on-4 hockey, the Petes couldn’t convert with a man advantage.

With 8:23 left of the first period, a tripping penalty was called against the Maroon and White. The Petes penalty killers made it hard for North Bay to enter the zone and as they failed to register a shot during their power play, as we continued our successful penalty killing.

John Parker-Jones snapped a breakout pass to Avon, who left the puck for Little, nearly scored the first goal of the game, but not before the buzzer sounded to end the first period.

Petes didn’t get off to the start they were looking for in the second period as they got called their fourth penalty of the game with less than two minutes into the period.

Battalion quickly registered their first power play goal of the game as Simon Rose roofed one past Austin, who had lots of bodies in front of him.

The Petes didn’t allow that Battalion goal to interfere with their game plan as they immediately entered the offensive zone and continued to have puck possession. A tired North Bay line was slow to change which resulted too many men on the ice.

Halfway through the second period, North Bay Cameron Peters high-sticked Little, who made his 2019 pre-season debut, and Chad Denault came in to defend him. As a result, Peters and Denault were both assessed with two-minute minor penalties and 4-on-4 hockey.

Upon the conclusion of 4-on-4 hockey, Hinz was hit from behind by North Bay’s Brandon Coe, and Little jumped in to defend Hinz. We were back to 4-on-4 hockey for two minutes.

With six minutes to go in the second, North Bay Mason Primeau passed the puck to Brad Chenier on a 2-on-1, which he managed to convert, leaving zero chance for Austin.

Petes didn’t take their foot off the gas despite being down 2-0, and continued to work hard, resulting in another power play opportunity. North Bay’s Primaeu was called for cross checking with two minutes left in the second.

Mason McTavish continued to show why he was drafted 5th overall as he used his speed through the neutral zone and entered the offensive zone. He used his quick release that rebounded off of Battalion’s Christian Purboo, right to Liam Kirk’s stick, which allowed him to score on the power play to cut Battalion’s lead in half with 21 seconds left in the second period.

The Petes came out flying in the third period as they gained momentum from Kirk’s late second period goal and registered a goal 2:15 into the period. A loose puck presented itself to rookie Joshua Kavanagh, who was making his 2019 pre-season debut. Kavanagh showed his patience and wrists one past Battalion’s Purboo.

Tension continued to rise as recently committed Pete Curtis Trolley and North Bay’s Joshua Currie were both called for roughing in front of NB goalie six minutes into the final frame, which resulted on 4-on-4 play.

During 4-on-4 play, Parker-Jones beautiful wrist shot from the point deflects off of Cameron Butler’s stick as he registers his third goal of the weekend. His game winner gave the Petes a 3-2 lead and the maroon and white showed zero signs of slowing down with nine minutes left of the game.

With a minute left in the game, North Bay opts to pull their goalie and applies tremendous pressure, but Austin continued to make all shots look easy as the final buzzer sounded. The Petes win 3-2.  Final shots 41-33 were in favour of Petes.

The Petes Pre-Season presented by CIBC Wood Gundy Peterborough continues in Kitchener on Sunday, September 1, at 2:00pm against the Kitchener Ragers. Fans can follow along on Twitter by following @PetesOHLhockey.

Flex pack holders can redeem their vouchers for regular season games starting on August 30 at 9:30 am. Season tickets are available starting at just $270. For more information about season tickets and flex packages for the 2019-20 Petes season, contact Mike at (705) 743-3681 x 263 or by email.