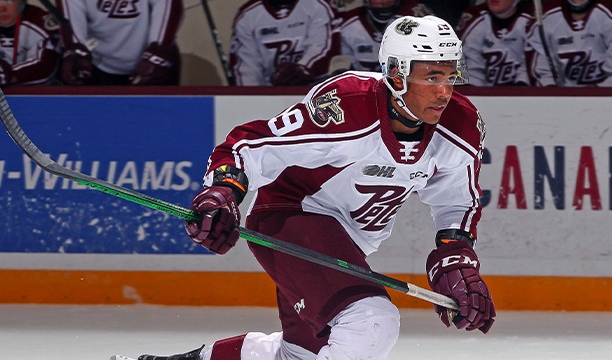 The Peterborough Petes are preparing this week to host an old rival in the Oshawa Generals on Thursday night at the Peterborough Memorial Centre. Puck drop is at 7:05 p.m. Oshawa took game one of the season series last weekend by a score of 6-3.

Despite a challenging start, Peterborough has maintained resiliency and has scored enough to be competitive in the East Division. Their 16 GF is tied with the Hamilton Bulldogs, who are undefeated through four games, and lead the East Division. As the season rolls on, Peterborough will become more familiar with opposing tendencies, which will help them eliminate more scoring chances.

Nick Lardis, Justin DeZoete, and Emmett Sproule scored on Sunday night. Lardis will look to extend his three game point streak lining up against Oshawa once again. The Oakville, Ont. native scored his second OHL goal in Oshawa on Sunday after picking up an assist on Saturday and a goal in the Petes Home Opener last week. The sixth overall pick in the 2021 OHL Priority Selection Draft is packing a punch with the Petes young roster.

Oshawa reconstructed their bench in the summer. The organization started by naming Todd Miller as their head coach on July 6. Miller has spent the last 11 years on a CHL bench as an assistant with the Barrie Colts and the Brandon Wheat Kings. Miller will be supported by associate coaches Kurtis Foster and Dave Matsos, and assistant coach Mike Hedden. Foster has ties to the Petes dating back to his playing days. He anchored the Petes defence across five seasons from 1997 to 2001.

Patrick Leaver, Zachary Paputsakis, and rookie Carter Bickle comprise the Oshawa net. All three have made at least one appearance this season with Leaver seeing the most action. Leaver stood in the crease against Peterborough on Sunday blocking 29 of 32 shot attempts. He posts a 2-1 record with a 2.72 GAA and .909 save percentage through four games.

Petes Special Teams
If the Petes curb their penalty minutes on Thursday night, they will take away high-scoring chances for Oshawa. Peterborough is has played in close games where a goal tilts the ice in favour of the team who scores.

Fans can watch Lardis, Sproule, and the rest of the Petes take on rival Oshawa Generals this Thursday, October 21 during First Responders Night. Tickets are now on sale for the 2021-22 season. For information on season tickets, private suites, or groups, please contact Eric Ebenbauer at eebenbauer@gopetesgo.com. If you are a first responder, please contact Ian MacGregor for a ticket discount as low as $15 at: imacgregor@gopetesgo.com.