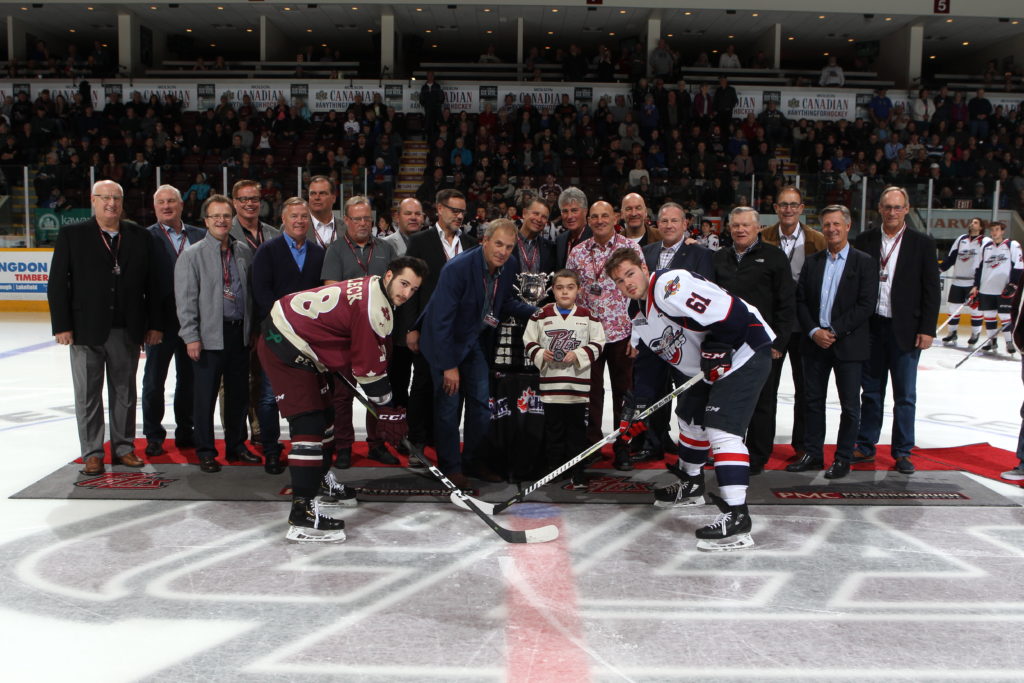 After a 2-1 victory over the rival Oshawa Generals on Friday, the Petes were back at home Saturday night  for the highly touted inaugural Alumni Homecoming Game. With over 70 alumni and their families in seats at the PMC – including the 1979 Memorial Cup winning team – the Petes suited up in special commemorative jerseys in search of a win against the Windsor Spitfires.

The presence of the Champions (and the Memorial Cup itself) were just enough to rally the boys as they  beat Windsor 4-2 to continue their winning streak, which began in North Bay on Thanksgiving Monday.

After a motivating pre-game ceremony recognizing the ’79 champions, the visiting bench ended up being the ones to make the first dent as Cole Purboo opened scoring for the Spitfires with an assist from Will Cuylle to give Windsor the early lead. Peterborough fans didn’t give Cuylle a warm welcome on the evening, seeing the first rounder for the first time since he was traded for nine draft selections in the off-season.

Following a couple of powerplay chances and with Windsor down a man momentarily, the Petes were able to capitalize as Pavel Gogolev and Declan Chisholm set up Czech import Erik Cermak for his first goal of his OHL career to make it an early 1-1 tie.

The two goalies held strong, only letting in a single puck each to end the first period on a single goal tie with the Petes leading the shots in the first 20 minutes 15-11.

Roughing calls to both sides  as well as a second penalty directed to the Petes produced a trio of two-minute penalties which caused the Liftlock Lads to be in a dangerous 4-on-3 disadvantage. Clearly the lack of two of his teammates was of little concern to Chris Paquette, who was able to get a lucky bounce from  Chisholm and score shorthanded to give Peterborough the 2-1 lead.

Peterborough’s celebration was short lived in the end, thanks to Purboo who was found by Cuylle again only moments later, this time assisted as well by Connor Corcoran to tie the score at two each.

The tie would hold once again going into the 2nd break with the shots on goal lead by Windsor 25-22.

The final period started with a flurry of back and forth action until Chris Paquette found Nick Isaacson who was able to fire what would end up being the game winner, bringing the score to 3-2 in favor of the Petes.

EYEZY! We're back out in front as @nick_isaacson, the league's leader in +/- at +12, buries a juicy rebound after initially feeding @Chris_paquette9 on a 2-on-1! 3-2 Petes!#GoPetesGo pic.twitter.com/C9t7kxwRim

Battling through weary legs in their fourth game in six games, the Petes had nothing left to do but watch Isaacson score an empty netter with 5.8 seconds left, assisted by Chad Denault. The Petes would go on to take the victory, marking their fourth win in a row.

EYEZY AGAIN! @nick_isaacson leads the #OHL in +/-, and he adds his 5th goal of the year to seal this one 4-2. Assist to @Denault17. #gopetesgo #ptbo pic.twitter.com/33gFQEhrOL

Paquette, Purboo, and Cermak were named the games first, second and third stars, respectively, while  Gogolev was named the Hardest Working Player of the Game.

Final shots were 36-29 in favour of the Spifires. Hunter Jones earned his league-leading eighth win.

The Petes play next on Thursday, October 18 at 7:05pm when they host the rival Oshawa Generals in the first of four on home ice against the Gens.  Tickets are  available through the Collins Barrow Box Office in person, over the phone at (705) 743-3561, and online.