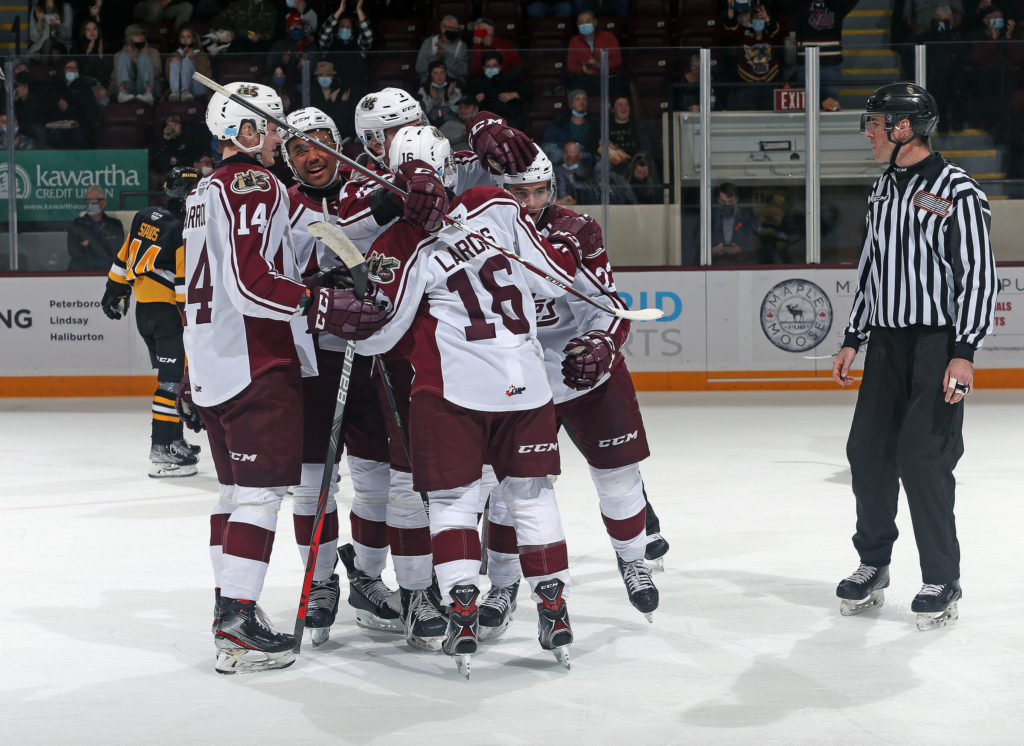 The Peterborough Petes edged out the Hamilton Bulldogs by a score of 4-3 on Thursday night at the Peterborough Memorial Centre thanks to goals from J.R. Avon, Tucker Robertson, Nick Lardis, and Joe Carroll.

The Petes came out with lots of energy and did not allow Hamilton to create offensive chances preventing the Bulldogs from getting a shot on net for the first two minutes. The maroon and white found themselves short handed seven minutes and 43 seconds into regulation.

With a man down, Michael Simpson and the penalty killers battled a fast power play unit that generated a great chance from the left circle.  A few seconds later J.R. Avon beat Logan Morrison to the puck along the right side boards and pushed up ice by himself as his teammates went for a line change. Leveraging Hamilton defenceman Nathan Staios as a screen, Avon wristed the puck between Marco Costantini’s pads to score the first goal of the evening. It was Avon’s first short handed goal and the Petes second short handed goal of the season.

Peterborough found themselves on the power play less than two minutes later after Jonathan Melee was called for slashing. Off a face-off scramble, Carroll controlled the puck and found an open Emmett Sproule in the right circle. Sproule’s shot was tipped by Robertson as he was skating across the net. Sproule extended his point streak to eight games with the primary assist. The goal was Robertson’s fourth tally of the season.

Coming into the second period, the Bulldogs fought back. Catching Peterborough by surprise, Melee rushed into the offensive zone a step ahead of Samuel Mayer. As Mayer had his stick across Melee’s body, the official called Mayer for hooking and enabled Melee to score on a penalty shot. Melee slipped the puck underneath Simpson as he deked left to right, cutting Peterborough’s lead in half.

Shots were 13-9 in favour of Peterborough and the team led 2-1 after the first period.

The second period was a fast one with only 11 total face-offs and both sides scored.

George Diaco saucered the puck between a couple Petes to a streaking Jan Mysak who, with Diaco to his right and defenceman Brian Zanetti in front of him, snapped the puck top shelf to even the score 2-2 at the 11:11 mark of the period. The goal was also Hamilton’s first shot on net in the period.

The Petes replied courtesy of Nick Lardis about six minutes and 28 seconds later. As three Bulldogs tried to take the puck from Carroll and Robertson behind the goal line, Lardis positioned himself in the slot. Carroll passed the rubber to Robertson behind Costantini’s net. Robertson quickly slipped it to Lardis for a successful one-timer goal that gave the Petes a 3-2 lead.

The maroon and white outshot Hamilton seven to four in the second frame. Robertson was a perfect seven for seven between the dots.

Peterborough would rely on Simpson and team defence early in the third period. Hamilton produced 10 shots in the first 10 minutes, which was more than the club produced in each of the first two periods. The Petes would strike again before the night was over. Robertson, who currently has 11 points across three Thursday night games, skated hard with the puck down the ice. As he was being trailed by two Bulldogs, Robertson passed the puck to a wide open Carroll in the slot. Going one on one against Costantini, Carroll lasered the puck over the goaltender’s right shoulder to regain a two goal lead. Lardis earned the secondary assist.

However, the Bulldogs kept it close all night. Their leading scorer, Logan Morrison, collected his third goal of the season at 18:29 of the period to shave Peterborough’s lead to 4-3. Gavin White and Mysak assisted on the goal.

The Petes helped Michael Simpson calm the storm and hold on to the lead to win 4-3. Simpson made 28 saves on 31 shots while Costantini turned aside 21 of 25 shots faced.