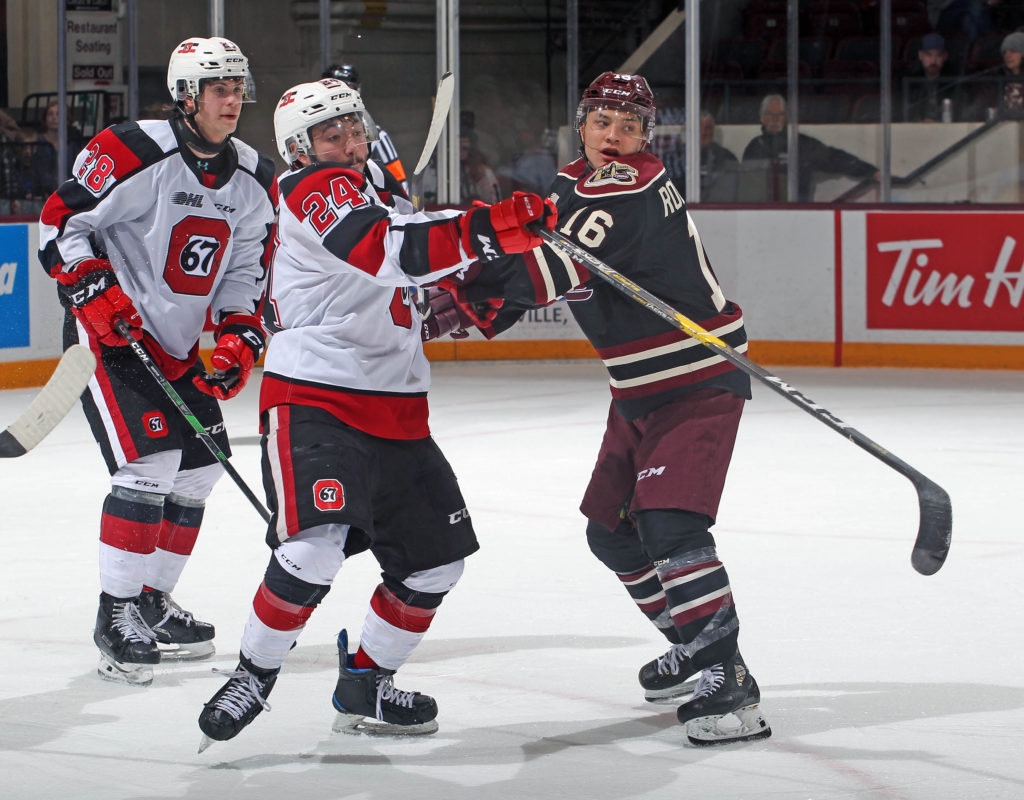 A 31-save performance by Minnesota Wild prospect Hunter Jones and two-point nights from Nick Robertson (1G, 1A) and Semyon Der-Arguchintsev (2A) helped the Petes defeat the CHL’s top-ranked Ottawa 67’s on Saturday night, putting an end to their 10-game win streak with a 4-1 victory.

Rob Wilson started the high-scoring line of Nick Robertson, Max Grondin, and Semyon Der-Arguchintsev to spark early offense and continue the Petes’ success against the country’s top-ranked 67’s. Former 67 Hudson Wilson and Jacob Paquette were the starting defenders in front of Hunter Jones.

Plans quickly changed for Peterborough when they were tasked to kill a penalty against the top-ranked power play unit. The fourth overall penalty killing unit prevented Ottawa from getting a shot on goal for two minutes to keep the score knotted 0-0.

After missing nearly a month of action, Liam Kirk deflected Paquette’s shot in front of Cedrick Andree to sound the Petes goal horn for the game’s first goal. Captain Zach Gallant picked up his career-high 48th point with the secondary assist on Kirk’s 17th goal of the season.

WELCOME BACK KIRKY 🇬🇧 In his first game since January 11, @kirky_1424 gets the boys on the board! Assists: @j_paquette6 + @zachgally. 1-0 Petes!#GoPetesGo | #Yotes pic.twitter.com/o60LZKSakn

Peterborough kept pressuring despite getting out shot 10-4, but it was Declan Chisholm who gave Peterborough a bit of breathing room. The Winnipeg Jets prospect fired a shot off an Ottawa defender and squeaked it past Andree for a 2-0 lead. The Toronto Maple Leafs prospect duo of Robertson and Der-Arguchintsev was awarded with the helpers on Chisholm’s 11th tally of the campaign.

Moments later, the Memorial Centre got loud for the third time after Der-Arguchintsev won the face off cleanly in the offensive zone and Nick Robertson worked his magic, using his lethal wrist shot to beat Andree. Robertson extended his goal streak to 14 games after his 42nd goal lengthened the Petes lead to 3-0.

Despite being out shot 11-6 after 20 minutes, a big thanks to Kirk, Chisholm and Robertson for giving the Petes a 3-0 lead.

A solid 20 minutes from the Maroon and White 👊#GoPetesGo pic.twitter.com/K2QyEBaX6m

Just minutes into the second period, the Petes were given the opportunity to lengthen their lead on a 5-on-3 power play, but Andree and the 67’s penalty killers successfully managed to hold out the Petes.

Peterborough continued to fire shots on Andree and out-hustle the 67’s, but couldn’t convert despite many chances in the second.

Just as Peterborough’s penalty was expiring early in the third, Alec Belanger converted on his third rebound after Jones stopped the first two. Ottawa cut Peterborough’s lead to 3-1 with 17:88 remaining in the game.

All 3,362 fans roared and cheered when Michael Little jumped on the loose puck in front and slid it past Andree to cushion the Petes lead 4-1 with minutes left in the game. Peterborough native Matt McNamara and John Parker-Jones picked up the helpers on Little’s sixth goal of the season.

For the fourth time this season, the Petes defeated the top-ranked 67’s, ending their winning streak in their last two match ups.

Final shots were 32-20 in favour of Ottawa. Jones, Robertson, and Der-Arguchintsev were named the game’s First Choice Haircutters first, second, and third stars of the game, respectively. The Mark’s Hardest Working Pete was Max Grondin.

The Peterborough Petes will take the ice next Thursday, February 13 against the Windsor Spitfires at 7:05 PM before travelling to Owen Sound to take on the Attack on Saturday, February 15 at 7:30 PM. They’ll host the Sudbury Wolves in a Family Day matinee at 2:05pm on February 17.