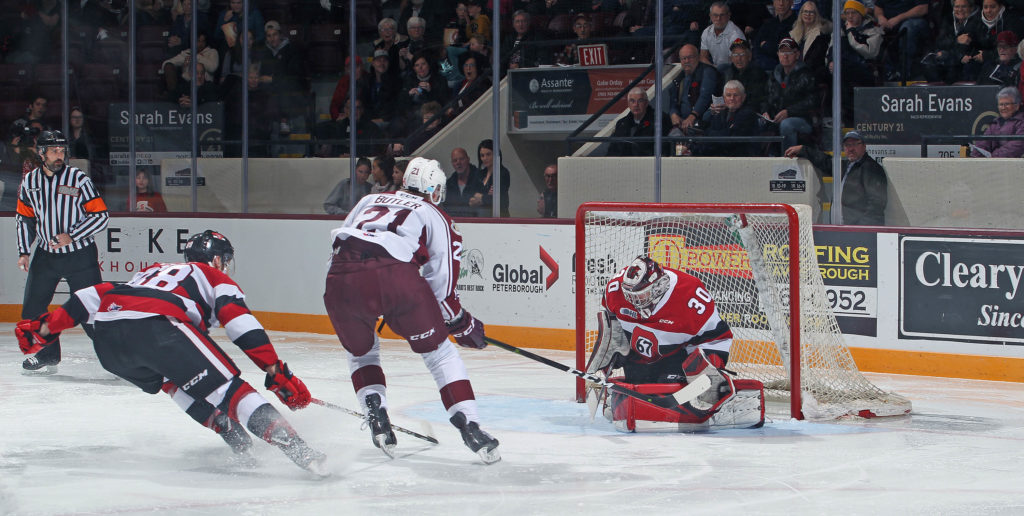 A Sunday matinee match up between two of the OHL Eastern Conference’s top teams saw the Petes play more than 60 minutes for the first time this season, but it was the visiting 67’s the headed home with the extra point after scoring 1:25 into overtime to take a 3-2 win.

Before the game, the Petes held a Remembrance Day ceremony to honour all men and women who have fought and are currently fighting for our country. The ceremony featured the 2672 Hastings and Prince Edward Regiment Royal Canadian Army Cadet Corps colour party and bagpipes.

It was a quiet first period after a heavy weight tilt between John Parker-Jones and Kevin Bahl following a big hit at centre ice seconds into the game. The Petes’ sixth ranked power play unit couldn’t convert after the 67’s had three separate infractions, however their fourth ranked penalty killers continued to excel as they killed off two of their own charges. The score was tied 0-0 even though the Petes led in the shot column 10-4 as the opening period came to an end.

Couple of goose eggs on the board after 20 👀#GoPetesGo pic.twitter.com/SqbQf0Efje

Shortly after Butler’s goal, Ottawa’s Marco Rossi was penalized for slashing and the Petes power play unit looked to convert for the first time during today’s game.

During the power play, Semyon Der-Arguchintsev made a pass to Gallant who one-timed the puck, missing the net by inches. Arizona Coyotes prospect Liam Kirk jumped on the loose puck, circled around the net and beat Andree high glove side. Kirk’s goal was his 11th of the year and Gallant picked up his second assist of the game. Der-Arguchintsev picked up his 23rd assist of the campaign as he got the secondary assist on the 2-0 goal.

TOP SHELF WHERE MUM KEEPS THE BOTTLE O’ HENDO’S🇬🇧! @kirky_1424 circles the net then snipes the puck over Andree! @zachgally and SDA with the helpers. We’re up 2-0!#GoPetesGo pic.twitter.com/Dh4ta7taH0

Minutes later, a hooking infraction was called against the Petes and the penalty killing unit took the ice seeking to kill its third straight penalty.
After setting up their power play unit, Ottawa’s Noel Hoefenmayer made a pass to Rossi, who then made a cross-ice pass to Joseph Garreffa before he converted on the power play to cut the Petes’ lead in half, halfway through the middle frame.
After 40 minutes of play and power play goals from both teams, the Petes lead 2-1 on the scoresheet and the shot column, 24-11.

Power play markers from both teams but we’ve got the lead thanks to @CButler_21 and @kirky_1424!#GoPetesGo pic.twitter.com/asPJ4kkaeZ

The 67’s tied the game 2-2 on the power play when Garreffa jumped on a loose puck beside Jones’ pad just six minutes into the final period. Jack Quinn and 67’s leading scorer Austen Keating assisted on the game’s tying goal.

Garreffa, Gallant, and Kirk were named the game’s first, second, and third stars.

The Petes are home this Thursday, November 14 at 7:05PM as they welcome the Niagara IceDogs.