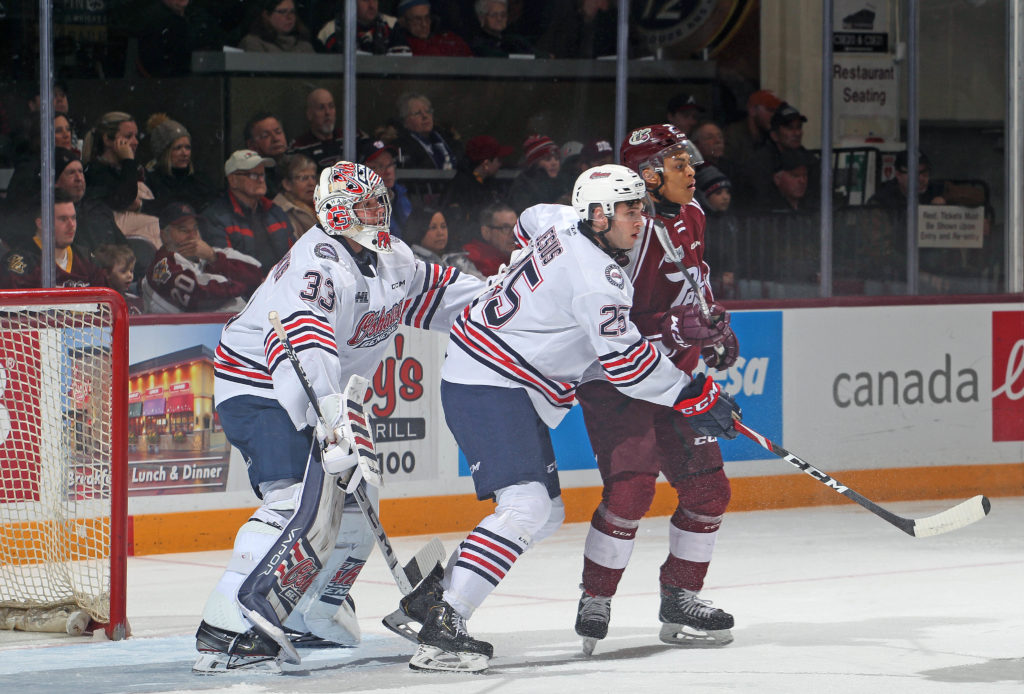 The Oshawa Generals scored three unanswered goals to force overtime and eventually took a 4-3 shootout victory over the Petes at the Peterborough Memorial Centre on a snowy Thursday night.

After having a week off, the well-rested Lift Lock Lads were eager to jump over the bench and on to the ice as adrenaline was pumping in a playoff atmosphere since puck drop. Even though the Generals were out shooting the Petes 6-1 in the opening minutes, it was Peterborough generating lots of chances and throwing their bodies around.

It wasn’t until the halfway mark when the Petes offence started clicking, resulting in Akil Thomas scoring the game’s first goal. The play was led by the hard work from captain Zach Gallant along the boards which allowed him to complete a pass to Jack York, who one-timed the puck on goal, but Thomas deflected his shot past Zachary Paputsakis.

Fans were getting a taste of the 115 rivalry in the opening frame as it was filled with lots of hits and scoring chances. The Petes came out ahead on the score board and in the face off dot, while out shooting the Generals 8-7.

We’ll start the middle frame with 1:37 left on the PP!#GoPetesGo pic.twitter.com/GaCF2l13WA

Rob Wilson’s intermission speech was well received by the Petes as they set off the goal horn twice in the opening 2:30 of the second period. Mason McTavish entered the offensive zone to get set up on the power play and fired a cross ice pass to Gallant who was calling for the puck. Gallant made no mistake and scored his 30th of the season to extend the Petes lead 2-0. Thomas picked up his second point of the night as he got the secondary assist on the play.

As momentum started to roll in favour of the Petes, Peterborough native Matt McNamara kept the puck alive in the attacking zone and made a quick pass to Liam Kirk, who then shot the puck on goal. Seconds later, Kirk realized it squeaked past Paputsakis to extend the lead 3-0. Gallant picked up his third point of the night and McNamara picked up the assist on Kirk’s 20th goal of the campaign.

CRACKIN’ FINISH, KIRKY 🇬🇧 @kirky_1424 from beside the net to give the Petes a 3-goal cushion! Assists: @mattmcnamara23 + @zachgally!#GoPetesGo | #Yotes pic.twitter.com/2Z2ZxTs4mP

After the Petes’ third goal, Generals head coach Greg Walters substituted Jordan Kooy for Paputsakis to turn things around. It sparked offence for the Generals as Ty Tullio scored his 26th goal of the season jumping on a rebound to cut the Petes lead 3-1.

Much like the first period, the Petes worked hard from whistle to whistle and took control of the game by out shooting the Generals 26-15, continued to control the face off circle and double up on the Generals inside the square corners.

This time, it was the Generals who scored early in the period as Oliver Suni one-timed David Jesus’ pass to make the game 3-2 Peterborough with lots of hockey left. Moments later, Lleyton Moore silenced the fans inside the PMC when he tied the game 3-3.

After numerous chances from both teams in the final minutes of the game, both Jones and Kooy stood tall for their respective teams and forced the game into 3-on-3 overtime. While in overtime Kirk and Thomas had a 2-on-0 but Kooy manned his crease. Neither team could convert in the extra period and fans were on their feet for the shootout.

The Generals took the tilt 4-3 and the Petes look for redemption on March 14 when the Generals visit Peterborough.

Final shots were 36-33 in favour of Peterborough. Gallant, Kooy, and Jones were named the game’s First Choice Haircutters first, second, and third stars of the game, respectively. The Mark’s Hardest Working Pete was Michael Little.

The Peterborough Petes will take on the Barrie Colts for the final time this season on Sunday, March 1 at 2:05PM. Fans are invited and encouraged to bring their skates as the Petes will be hosting a free post-game skate.