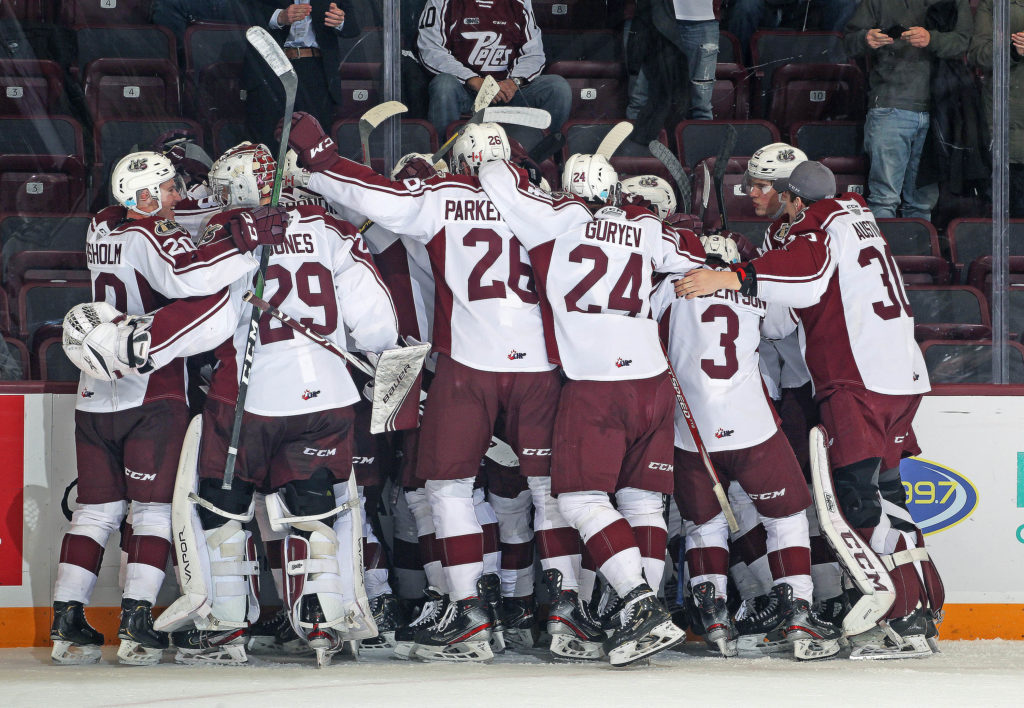 A Mason McTavish hat trick and multiple points from three others led to a 7-3 Peterborough win in St. Catharines on New Year’s Eve. The Petes end 2019 in first place in the Ontario Hockey League.

The Maroon and White got to work quickly – just 52 seconds into the game, to be exact. Peterborough native J.R. Avon was in the right spot at the right time to find himself on the receiving end of a feed from Zach Gallant and Tucker Robertson to open scoring.

J.R.! @Avonjr_1010 is left alone in front and capitalizes, opening scoring 52 seconds into this one! @zachgally and @Robertson_62 assist. 1-0 Petes!#GoPetesGo pic.twitter.com/10THKCLV5T

Peterborough’s momentum was just as quickly shuttered when they were forced to defend a 2 minute 5 on 3 Niagara power play. Just a few seconds before the dual man advantage was set to expire, the home team evened the game’s score at 1. Oliver Castleman extended a point streak to 8 games by beating Tye Austin from the doorstep.

To say momentum was restored for the Petes would be an understatement, as the Lift Lock Lads went on to score 5 straight through the remainder of the opening frame.

Cameron Butler was eventually credited with Peterborough’s second goal after Declan Chisholm’s point shot brushed past the 2020 NHL Draft eligible forward, with Max Grondin earning the second assist on the play after making an effort to stay onside.

The rookie’s first of the night was a wrist shot from the top of the circle to polish off a passing play from Chisholm and Semyon Der-Arguchintsev.

The trio connected again when Der-Arguchintsev found Chisholm on the point for a one-timer that was tipped home by McTavish for his 23rd of the season.

Zach Gallant got in on the goal scoring action by lifting a backhand shot into the Niagara net after taking a quick pass from McTavish, marking the San Jose Sharks prospect’s 19th tally of the year.

GALLY! The captain @zachgally adds a goal with a nifty backhander! Point 3 on the night for @masonmctavish27 with the only assist. 5-1 Petes!#GoPetesGo | #SJSharks pic.twitter.com/nBad1tCcnX

McTavish completed his second Ontario Hockey League hat trick in a matter of 2:47. Positioned at the side of the net, the CHL’s top goal scoring freshman chipped in Jacob Paquette’s blue line blast, with Der-Arguchintsev adding his third helper of the game.

Make that 3⃣ in the first frame for @masonmctavish27! Another tip into the Niagara net to make it 6-1 Petes! Helpers from @j_paquette6 and @semder009.#GoPetesGo pic.twitter.com/6IJIq1dc9Y

The Petes were in complete control of the game through 20 minutes, holding heavy advantages in goals, shots, and face off wins.

The second period wasn’t nearly as eventful for the Electric City Kids, but it was a solid one.

Late in the frame the IceDogs appeared to have scored, but the Petes rightfully challenged the goal. After a review by the officials, what would have been Niagara’s third goal was called back.

Peterborough still held a stranglehold on the score board through 40 minutes of play.

Gallant added his second goal and third point of the match from a sharp angle, beating Niagara netminder Josh Rosenzweig to increase Peterborough’s lead to 7-2.

Jake Uberti added a marker for the IceDogs mid-way through the frame, but a four goal deficit would be the closest Niagara would get to catching the Maroon and White.

Final shots were 35-25in favour of the Petes. McTavish, Chisholm, and Gallant were named the game’s First Choice Haircutters first, second, and third stars of the game.

The Petes will practice Wednesday before hosting the Erie Otters in their only visit to the Peterborough Memorial Centre on Thursday, January 2 at 7:05pm.