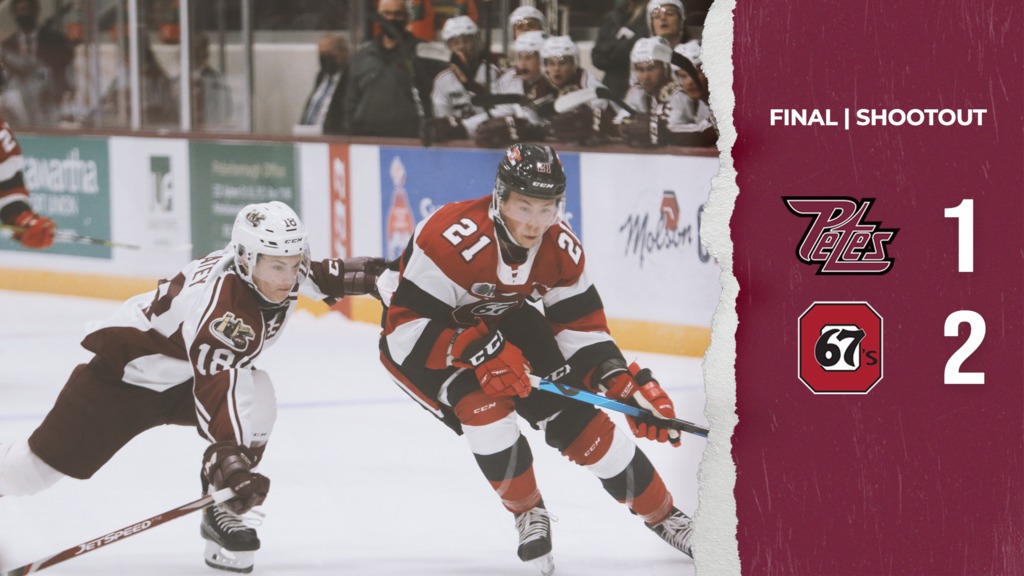 Ottawa 67’s Cooper Foster and Chris Barlas netted goals in the shootout to hand the Petes their first preseason loss during Labour Day’s matinee tilt at the Peterborough Memorial Centre. This was the first time the Petes played since March 8, 2020 (546 days) and the first time the newly looked maroon and white squad took the ice as a team.

Despite numerous chances early in the opening frame by the Petes, a sudden surge of pressure from the 67’s created a turnover and a long stretch pass to Cameron Tolnai – who wristed the puck past Austin to put Ottawa up 1-0. Moments later, the Petes returned the pressure, but goaltender and Peterborough native, Will Cranley, stood tall for the barber poles.

Just before the opening period expired, Sam Alfano jumped on the loose puck behind the goal line and sent a pass to Tucker Robertson, who one-timed the puck past Cranley to even the score at one apiece. Petes 6th overall pick in the 2021 OHL Priority Selection, Nick Lardis, also picked a helper on the goal.

Robertson one-timed Sam Alfano’s feed from the corner to tie the game up just before the opening period expired!#GoPetesGo pic.twitter.com/CymCa8RgVL

After shaking off the rust in the first period, the Lift Lock lads came out flying in the second, keeping Cranley busy and wearing down the 67’s. They generated lots of scoring opportunities and came close to converting on the power play, but couldn’t succeed.

Halfway through the second period, Michael Simpson replaced Tye Austin and Collin MacKenzie replaced Cranley. The 67’s tried to pull a few fast ones on Simpson but the rookie netminder stood tall and controlled all shots and rebounds.

Lots of chances in the second frame, but we’re still knotted at 1.#GoPetesGo pic.twitter.com/hAzccX5gDH

With the game tied 1-1 in the third, and both teams seeking offence, the game started getting chippy and Peterborough found themselves a few men short. With Ottawa looking to convert on the 5-3 powerplay, the Petes’ penalty killers and Simpson stood tall to keep things tied late in the third.

Despite late offensive pushes from both teams, it wasn’t enough as the final buzzer sounded and the game went into a shootout. The order of the shootout went as follows:

Finals shots were 35-32 in favour of the Petes. Robertson, Tolnai and Shawn Spearing were named the game’s first, second, and third stars.

The Peterborough Petes are back in action on Thursday, September 16 when they host Shane Wright and the Kingston Frontenacs at 7:05 pm before travelling to the Sudbury to face the Wolves on Friday, September 17 at 7:05 pm.