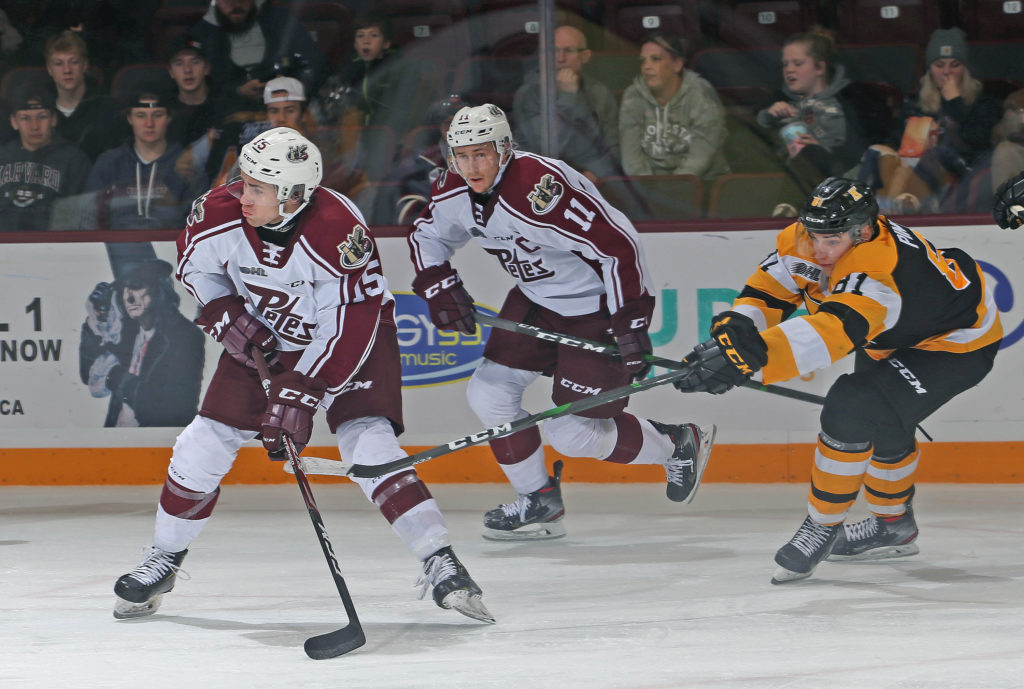 Peterborough’s five game winning streak came to an end in the Limestone City on Friday night as the league-leading Petes fell 7-2 to a hot Kingston Frontenacs club.

The hockey gods gave back to the Petes what they got last night in a bad bounce for the home team to open scoring. Dawson Baker was credited with Kingston’s first goal after banking the puck off of a Petes player and into the back of Tye Austin’s net just 43 seconds into the match up.

The Frontenacs, who were clad in Kingston Canadians blue, white, and red on Friday night, made quick work on their first man advantage with Nick Wong, assisted by former Pete Dustin Hutton, beating Austin with a quick wrister from the top of the far circle to bring their lead to 2-0.

CHIS! A power play blast from @chis_decs on the point beats Dugas to cut into Kingston’s lead! @nickrob2001 and SDA with the helpers. 2-1 *Canadians*.#GoPetesGo | #GoJetsGo pic.twitter.com/Rm2l8RJjvj

Kingston would kill another penalty before getting their next power play chance which saw Zayde Wisdom redirect a shot from the blue line into the net, extending his club’s lead to 3-1 ahead of the first period buzzer.

The second period started the same way the first ended, with a Kingston power play marker. A Petes penalty carried over from late in the first was converted into Baker’s second tally of the night 1:15 into the frame.

The rivals exchanged overlapping infractions ahead of the Maroon and White their second of the game. Max Grondin picked up his seventh of the campaign by batting a Zach Gallant rebound out of the air mid-way through the period. Former Frontenac Jacob Paquette earned the secondary assist on what would be Peterborough’s final goal, cutting Kingston’s lead to 4-2.

Kingston added to more tallies to close out the stanza. The first came from underage forward Shane Wright who was given time and space at the net to lift a loose puck into the top corner. Nick King added the Frontenacs’ sixth goal after patiently out-waiting a sprawling Petes defender to release a quick shot over Austin’s glove.

Peterborough continued to lead in shots and draws, but Kingston held a solid lead on the scoreboard through 40 minutes.

Aside from each team picking up a handful of penalties in the final period, Baker would complete the hat trick and seal his team’s 7-2 win at 12:34.

Final shots were 41-40 in favour of the Frontenacs. Baker, Jordan Frasca, and King were named the game’s first, second, and third stars.

The Petes wrap up their weekend and second straight ‘three-in-three’ set against the same Frontenacs on Saturday, December 7 at 7:05 pm at the Peterborough Memorial Centre.