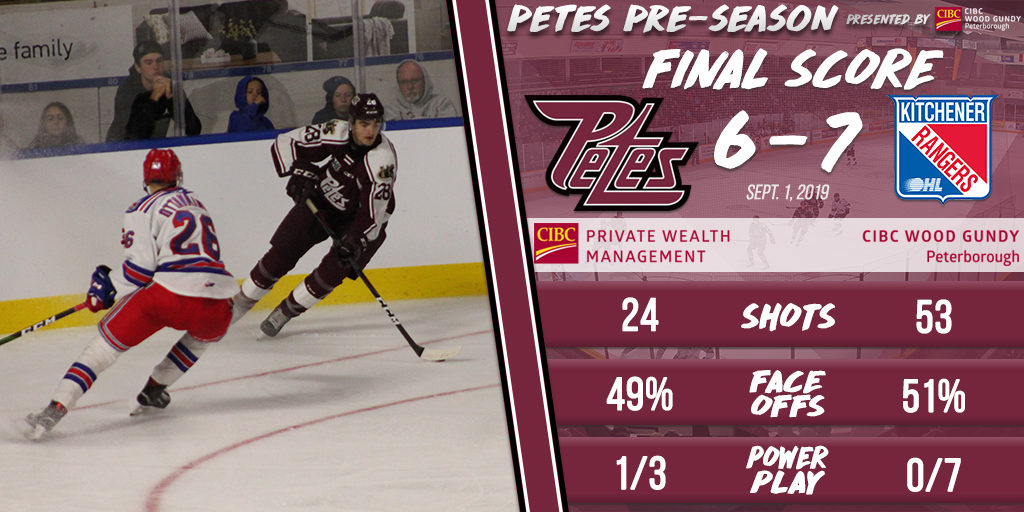 The Petes Pre-Season presented by CIBC Wood Gundy Peterborough looked for their third consecutive victory, but fell short as the Kitchener Rangers came away with a 7-6 shootout victory Sunday afternoon.

Head Coach Rob Wilson started Michael Little and newly signed Tucker Robertson with captain Zach Gallant centering the line to kick off the final game of the 2019 OHL Pre-Season Showcase. Declan Chisholm and Peterborough native Matt McNamara were defending rookie goaltender Michael Simpson, who made his first appearance in the Maroon and White.

Petes weren’t off to the start they were looking for as they were called for slashing 1:17 into the opening period. Simpson saved five shots, including a beautiful desperation cross-crease save as he stopped all of Kitchener’s power play shots.

The first goal of the game wasn’t scored until the 8:44 mark of the first period as the Rangers’ Jonathan Yantsis squeaked one past Simpson. Rangers continued to apply pressure and Graham Dickerson converted on a rebound less than two minutes later. The Petes found themselves trailing 2-0.

Two minutes later, Max Grondin scored his first goal of the weekend to cut the Rangers lead in half.

Despite being out-shot 19-8 and trailing by one, the Petes showed no signs of slowing down as recently committed Pete Curtis Trolley snapped a wrist shot past Rangers goalie Jacob Ingham to tie the game at 2.

With momentum shifting in favour of the Petes, Grondin gained speed through the neutral zone and made a cross-ice pass to Chad Denault as he sniped the puck past Ingham. The Petes’ three unanswered goals gave them a 3-2 lead with 10 seconds remaining on the clock.

Even though the Petes applied pressure when the puck was dropped for the second period, it was the Rangers’ Riley Damiani who found the back of the net to tie the game at three, just two minutes in.

As Butler exited the penalty box for slashing, his wrister rung the puck off the post, just in time for Chisholm to pass it to Grondin. who wired the puck off the post again. As Butler continued to stay with the play, Grondin’s shot came to Butler’s tape as he buried his fourth goal of the weekend. The Petes re-gained the lead with 15 minutes left of the second period. It was 4-3.

Trolley continued to show his aggressiveness as his fore-checking draws roughing penalty to 2018-19 Rangers’ leading scorer Greg Meireles. The Petes look to extend their lead before the second period expires, but didn’t convert.

Still up by one goal after 40 minutes of play!#GoPetesGo pic.twitter.com/pQuUUDFLZj

The third period saw two goals in the first 4:53 of play. A clean face off win allowed the puck to come to John Parker-Jones. His wicked wrister bounced off a Ranger and Peterborough native J.R. Avon fired the puck past Ingham as he registered his first pre-season goal as Pete. Avon’s insurance goal put the Petes up 5-3.

Shortly after Avon’s goal, the Petes quickly found themselves on a 5-on-3 penalty kill as they were penalized for slashing and delay of game. Rangers’ Yantsis tipped the puck out in front of Simpson, giving him no chance as he registered his second goal of the game.

Just over two minutes later, Rangers Yantsis registered his hat-trick and the Rangers tie the game at 5 with 13:00 remaining in the third.

A too many men penalty for the Rangers allowed the Petes to set-up their power play unit. Petes 2019 fifth overall draft pick, Mason McTavish used his lethal shot to beat Ingham blocker side as he registered his first goal as a Pete. McTavish’s go-ahead goal brought the Petes to 6-5 with just over 4:29 remaining in the game.

After the Petes called a timeout and with six seconds remaining in the game, Rangers’ Declan McDonnell found the back of the net to tie the game 6-6.

No overtime is played in pre-season. The Petes and the Rangers were off to a shootout. The shootout went as follows:

Single game regular season tickets will go on sale on Friday, September 6 at 9:30am at the PMC Grant Thornton Box Office in person, by phone at (705) 743-3561, or online. To view the Petes’ full schedule, click here.

NEW Educational Activities: May 21
4 days ago