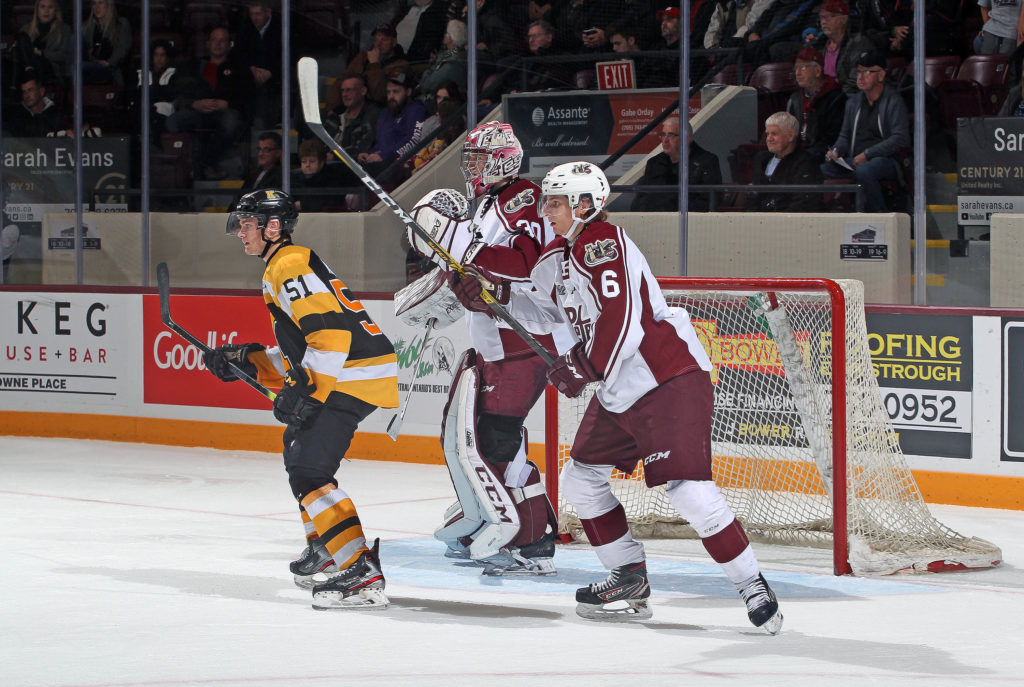 The Peterborough Petes were handed their first shootout loss of the season on Thursday, falling 4-3 to the Kingston Frontenacs at the Peterborough Memorial Centre.

Minutes before the period ended,  Michael Little used the square corners to Peterborough’s advantage as he fired the puck into Kingston’s zone. The odd bounce worked in favour of Brady Hinz as the puck rolled onto his stick and he put it past Ryan Dugas for his ninth of the season. Little and Hudson Wilson picked up the helpers on the play.

HINZY! @BradyHinz stays hot against the Fronts after picking up a bounce off the boards courtesy of @mlittle00! @hudson_wilson18 with the second helper. We’re all tied up at 1!#GoPetesGo pic.twitter.com/ijxnWNL6Xd

After trading goals in the first period and winning the majority of the face offs, the Petes found themselves trailing 13-10 in shots.

The Petes started the second period the same way they concluded the first period when speedy Max Grondin picked up the loose puck in the neutral zone and the play quickly transitioned into a 2-on-1. Grondin’s fifth of the season beat Dugas to give the Lift Lock Lads a 2-1 lead 3:43 into the second period. Assists went to Peterborough native J.R. Avon and Wilson, credited with his second of the night.

GORDO! @GrondinMax slides the puck under Dugas to get the Petes in front! @Avonjr_1010 assists and so does @hudson_wilson18 for his second apple of the night! 2-1 Petes!#GoPetesGopic.twitter.com/hVaNPSQ0Qb

With bodies starting to pile up in front of Dugas, captain Zach Gallant made a tape-to-tape pass to John Parker-Jones. Parker-Jones’ quick release found the back of the net that extended the Petes lead to 3-1. Gallant and Tucker Robertson assisted on Parker-Jones’ third tally of the year.

Minutes later, Wisdom’s second goal of the night trimmed the Maroon and White’s lead to one. Hutton and 15-year-old rookie Shane Wright, who was the sixth player to be granted exceptional status by the CHL, got the assists on the tick-tac-toe goal.

For the second straight period, the Petes trailed in shots, but this time were ahead in the goal column.

It’s not by much, but we’ve got the lead after 40!#GoPetesGo pic.twitter.com/tpNkFeTEt2

It was a quiet third period until Dennis Golovatchev scored the game tying goal halfway through the third period after a fumble behind the Peterborough net.

60 minutes of play and 3-on-3 overtime wasn’t enough, sending the Petes to their first shootout of the season. While Mason McTavish and Semyon Der-Arguchintsev were able to beat Dugas, Parker-Jones’ attempt went wide of the net. Nick Wong, Francesco Arcuri, and Shane Wright all scored for Kingston, earning the Frontenacs their third win of the season.

Final shots were 38-35 in favour of the Frontenacs. The Petes were 0/4 on the power play and a perfect 3/3 on the penalty kill.

The Petes are back in action on home ice on Saturday, November 23 as they battle the Kitchener Rangers for the first time this season at 7:05pm.