Petes fall to Generals for first time this season 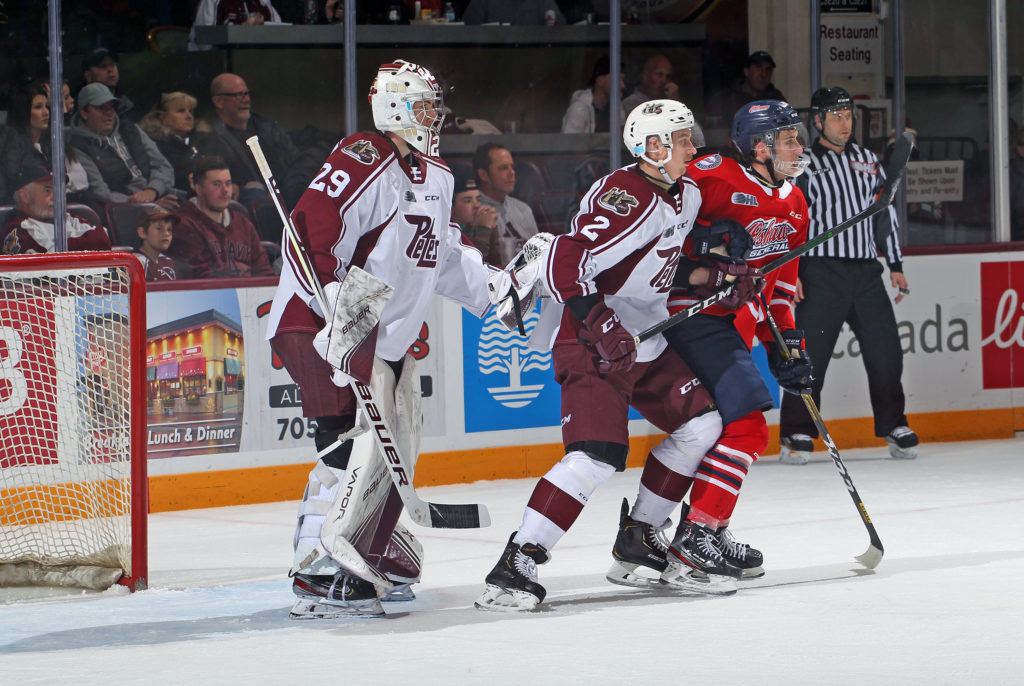 A hard fought two-goal third period, and four point performance from Akil Thomas, got them close to a comeback but the Petes ultimately fell 6-4 to the division rival Generals in Oshawa on Sunday evening. It’s the first time this season that the Generals have taken a win against the 26-13-2-1 Petes.

Akil Thomas nearly found his first goal in Maroon and White less than 30 seconds into the Sunday showdown, ringing the puck off of Jordan Kooy’s net.

It wasn’t long after that close call that Oshawa opened scoring. A no-look pass from Allan McShane found David Jesus who banked the puck off of the back of Hunter Jones and into the net 4:48 into the game.

His shot off the post was a sign to things to come for Thomas who found the equalizer for his Petes mid-way through the frame. The LA Kings prospect got a stick on Hudson Wilson’s point shot to beat Kooy, tying the game at 1.

KILLER! @AkilThomas2 nets his first goal in Maroon and White with a redirection on a @hudson_wilson18 point shot! All tied up at 1!#GoPetesGo | #GoKingsGo pic.twitter.com/ZbmhYFRVKr

Unfortunately for the Petes the 1-1 score didn’t last long. A misplay where Jones was caught behind his net, Daniel Michaud saw Brett Harrison alone in front who had an empty cage to deposit the puck into with the Generals on their first power play of the night.

Oshawa’s go-ahead goal would be the final of the first period which was otherwise dominated by the Petes, with the Maroon and White firing more than twice and many shots and winning 12 of 20 face offs.

Another Petes infraction resulted in the Generals’ second man advantage marker of the evening. Phil Tomasino’s first goal on Oshawa ice came off of a quick shot from the far face off circle assisted by McShane and Harrison 10:09 into the second stanza.

The Maroon and White were back within one thanks to the trio of Nick Robertson, Thomas, and Jacob Paquette. Paquette was poised to keep the puck in at the blue line before sending it back into the Petes zone. Thomas picked up the puck to feed Robertson in front, who picked a corner over Kooy to cut Oshawa’s lead to 3-2.

ROBBY!! @j_paquette6 dumps the puck into the zone for @AkilThomas2 who dishes to @nickrob2001 in front for a rip past Kooy! We’re back within 1! 3-2 Generals.#GoPetesGo | #LeafsForever pic.twitter.com/tTR8m2jIVj

Much to the chagrin of the Petes, the Generals took less than three minutes to respond. Again it was Tomasino to extend Oshawa’s lead, this time cutting across the crease to pick up a bouncing puck with Ty Tullio and Brett Neumann credited with the assists on the late goal.

The Petes continued to hold the advantage on the shot clock and in the face off circle through 40 minutes, but were a couple goals short of their division rivals.

When you thought the Generals might be on the defensive to protect their 4-2 lead, Harrison netted his second of the game after settling a long, high pass from Mitchell Brewer and Kooy 1:20 into the final frame.

The Petes would go on to score two straight to bring themselves back within one goal.

Robertson’s second of the game, and 28th of the season, was the result of a set of passes from Thomas and Semyon Der-Arguchintsev, and shortened Oshawa’s lead to 5-3 with 11:45 left to play.

Awarded their first man advantage of the match, Der-Arguchintsev put away his second goal in as many games with a quickly released shot set up by the hot stick of Thomas and further assisted by birthday boy Declan Chisholm. With 6:16 left in the third period, the Maroon and White were just one goal back, Oshawa still leading 5-4.

With just under a minute and a half left to play in regulation, Jones was called from his crease to the Petes bench to add an extra attacker. with six Petes on the ice, the visitors were eager to bury an equalizer. A busted stick on the point led to an Oshawa two-on-one that saw Tomasino pass to Tullio for an empty netter, finalizing the 6-4 Generals win.

Final shots were 32-28 in favour of Peterborough, with the Petes winning 60% of the game’s face offs. Harrison, Tomasino, and Thomas were named the game’s first, second, and third stars.

The Maroon and White will have back-to-back home games next weekend, first on Saturday, January 18 against the Flint Firebirds at 7:05pm before the rescheduled game against the Niagara IceDogs on Sunday, January 19 at 2:05 PM.