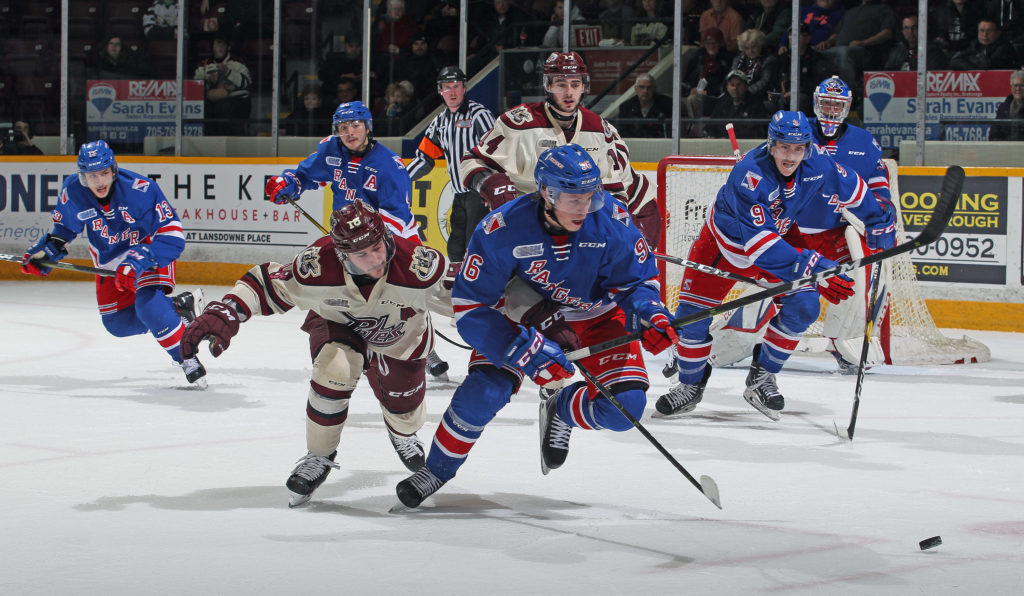 Despite out-shooting Kitchener 43-25 and scoring two power play markers, the Petes fell 5-3 to the Rangers at the Peterborough Memorial Centre Tuesday night.

The first mark came near the mid-way point of the first period. It was Kitchener who first got onto the board with a shot from Jonathan Yantsis that was assisted by Dallas Stars prospect Riley Damiani and Rickard Hugg, giving the visitors an early 1-0 lead.

With 1:11 remaining to be played and in the midst of a power play thanks to a Rangers penalty, the Petes marked their first point of the night as Erik Čermák fired his second goal of the season with helpers credited to both fellow import Liam Kirk and veteran Chris Paquette.  Čermák’s goal would tie the night at 1-1 going into the first intermission.

After 20 minutes the Petes led the shots on goal 13-10, and held a strong lead in the face off circle as well.

The home team carried their momentum into the second frame and it paid off in a big way as, with 17:10 on the clock, Čermák struck again. Jake Partridge earned his first OHL point on the play, while Declan Chisholm tallied another marker to his stats, rattling Kitchener’s unsuspecting netminder Luke Richardson and giving the Electric City Kids the 2-1 lead.

At 13:53 of the middle frame, the Rangers would strike back for their second of the night to once again draw the game into a tie, this time at 2-2 with a rocker from Chase Campbell which he received from Joseph Garreffa and Jack York.

The confidence given to the Rangers following Campbell’s goal would propel them to another at 8:40 as Justin MacPherson would score unassisted as he stepped out of the penalty box to give Kitchener the lead by a goal at 3-2.

With 3:40 remaining in the second period, the Petes would come back to re-tie the night 3-3 with a Paquette bullet assisted by Adam Timleck and previous goal scorer Čermák.

PAQ ON THE PP! @AdamTimleck feeds @Chris_paquette9 on the slot to tie the game at 3! @CermakErik registers his third point of the night with an assist.#GoPetesGo pic.twitter.com/GnhLlbKQBG

The Rangers would not let the celebration of Paquette’s goal hang in the air long, as with the assistance of York and Alexey Lipanov,  Campbell would claim his second of the night to ensure that Kitchener regained their lead with the board marked 4-3 in favour of the visiting club  to end the period.

Shots on the clock would still remain in the home teams’ graces as they stood 36-15 in favour of the Petes after 40 minutes.

The third consisted of the usual back and forth play, but the highlight continued to be the high volume of shots that Peterborough piled on Richardson.

Although they were substantially out-shot, the Rangers managed to hang on to the lead and beat the Petes 5-3 in their only PMC appearance thanks to a 28 second mark empty netter from Greg Meireles assisted by Rickard Hugg.

Live post-game with tonight’s first star with with 2 goals and 1 assist – @CermakErik! https://t.co/r2Le0AFu2j

The Petes will be back at the PMC on Saturday, November 10 to play the Hamilton Bulldogs at 7:05pm. Tickets are available through the Collins Barrow Box Office in person, over the phone at (705) 743-3561, and online.

The specialty plaid jerseys worn during November 1’s Plaid Night game are now available for purchase via online auction in support of United Way Peterborough & District. Bidding begins to close at 7:00pm ET on Friday, November 16, the same day the Petes head to London to take on the Knights.