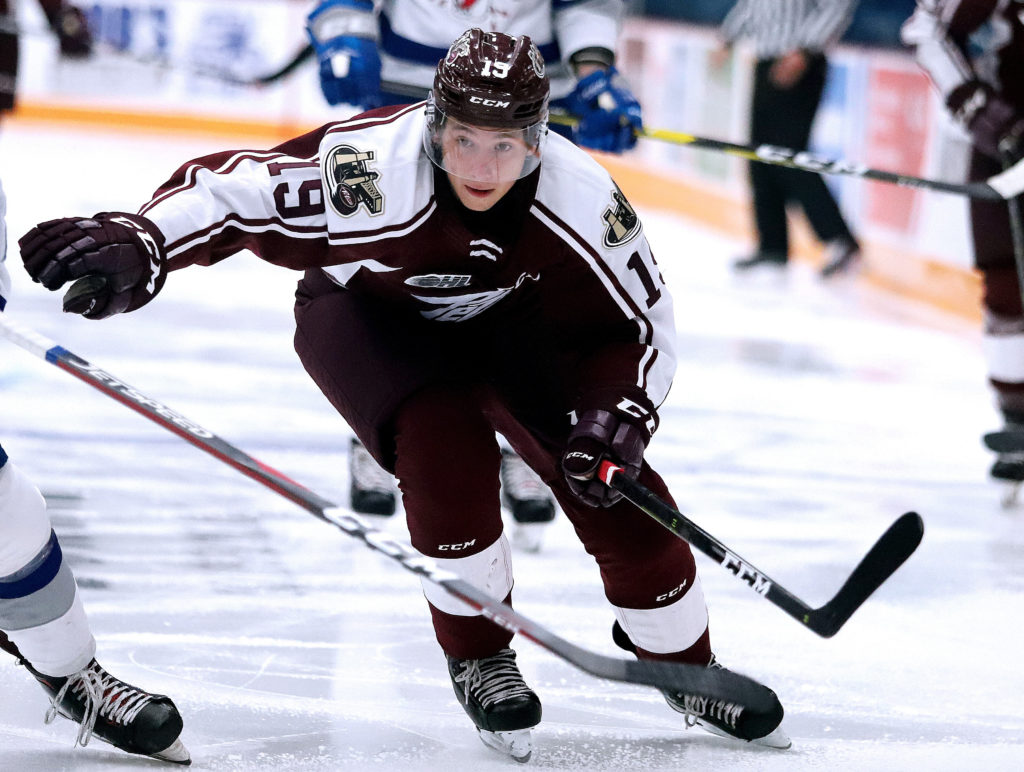 For the second time in as many meetings this season the Petes fell to the Sudbury Wolves in the Nickel City, with the Saturday night meeting resulting in a 5-2 win for the home team.

The first frame was quiet but quick paced. Aside from the conference rivals exchanging penalties, there were no other marks to the score sheet. Both teams were perfect on their first penalty kill attempts of the night.

Sudbury, who led in shots 16-10 in the opening stanza, had their best chance when a Wolf fired the puck off the crossbar.

Lots of shots but no goals just yet in Sudbury!#GoPetesGo pic.twitter.com/i7UMRQy12W

A late first period double minor infraction called against Peterborough carried into the second, but the maroon and white were able to keep the Wolves at bay for the time being.

After a few minutes of strong pressure from the Petes, the Wolves shifted the game’s offensive momentum and were able to draw first blood. An unsuccessful clearing attempt out of the Peterborough zone was picked up along the far boards by Blake Murray who was able to squeeze the puck through Hunter Jones 11:01 into the second.

Peterborough would have to kill two more penalties in the back half of the period, but were successful in eradicating them both.

The Lift Lock Lads were down in goals and shots through 40 minutes.

The Wolves didn’t do the visiting Petes any favours early in the third, as they scored two goals in 52 seconds putting Peterborough in a 3-0 deficit.

Kosta Manikis scored Sudbury’s second goal after sliding into the high slot to take a pass from Macauley Carson before beating Jones on his glove side at 1:26.

Shortly after David Levin followed up with a point shot redirect from the doorstep at 2:18.

Some extracurricular activity between Chad Denault and Emmett Serensits sparked some energy in the Petes who were able to cut into Sudbury’s lead 6:16 into the final frame. Nick Robertson’s 17th of the season, assisted by Declan Chisholm and Semyon Der-Arguchintsev, brought Peterborough within 2.

After review, this goal now reads N. Robertson from Chisholm and Der-Arguchintsev.#GoPetesGo https://t.co/avJ84xvRuk

Awarded their second power play of the evening, the Petes would further cut into Sudbury’s lead. Semyon Der-Arguchintsev planted himself in front of Purboo after dishing the puck to the blue line and was able to put away a Zach Gallant rebound, with Chisholm collecting his second assist of the night on the play.

SAMMY! SDA moves the puck to the blue line before heading to the net to bang the rebound home! @zachgally and @chis_decs get the assists. We’re within 1, as it’s 3-2 Wolves.#GoPetesGo | #LeafsForever pic.twitter.com/7mPQQEJreX

Quinton Byfield, who had just left the penalty box, exacted some revenge on the Petes to restore his club’s two goal lead by beating his man along the near boards before skating the puck into the slot and depositing the puck behind Jones with 4:20 left to play in the game.

Nolan Hutcheson secured the 5-2 victory for the Wolves with an empty net tally with less than two minutes remaining.

Final shots were 36-20 in favour of the Wolves.

The Petes wrap up the weekend with a visit to North Bay to face the Battalion on Sunday, November 3 at 2:00pm.

It’ll be a quick turnaround for the maroon and white as they’ll host the Kingston Frontenacs in a rare Tuesday home game on November 5 at 7:05pm for First Responders night. All area first responders can claim a free ticket to Tuesday’s game by calling Drew Nascimento at (705) 743-3681 ext. 257 or sending him an email. Tickets for all regular season home games are available through the PMC Grant Thornton Box Office in person and over the phone at (705) 743-3561 Monday to Friday from 9:30am to 5:00pm, and 24 hours a day online.