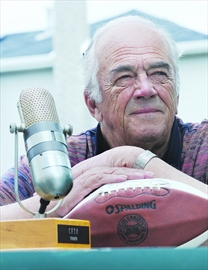 The Peterborough Petes are saddened by the loss of esteemed sports broadcaster John Badham. He passed away on Thursday at the age of 79, leaving behind his wife Dot.

Mr. Badham served the Peterborough community on the air for nearly three decades, most recently as a host of Extra 90.5’s ‘The Regulars.’ He rose to prominence as a play-by-play broadcaster for various Canadian Football League teams, and also covered several Olympic Games, the Western Hockey League, and more during his nearly 60 years in the industry. Mr. Badham also served as the Petes Public Address Announcer for a brief period.

Extra 90.5 will be airing memories of Mr. Badham over the coming days and weeks to pay tribute to the broadcaster, who was presented with the Sports Media Canada’s Career Achievement Award in October.