Petes Gearing Up for Special Olympics & Next Gen Games 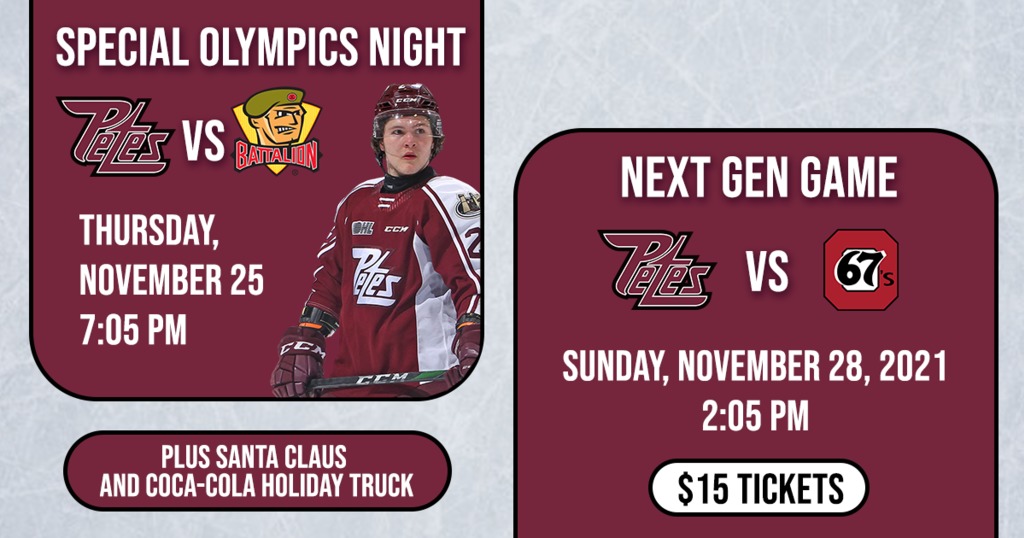 The Petes will kick off their four-game homestand this Thursday on Special Olympics Night against Central Division leaders, the North Bay Battalion. Fans are encouraged to arrive at the PMC early to avoid the lines to see Santa Claus on Coca-Cola Canada’s Holiday Truck Tour. Peterborough Salvation Army will be playing instrumental Christmas music in front of the PMC before they play the national anthem prior to 7:05 pm puck drop. Fans are also accepting donations for Kawartha Foodshare throughout the game.

What Fans can Expect:

After soaring to a 9-3 victory over the Ottawa 67’s on Sunday in the nation’s capital, the Petes will have a chance to do it again, but this time, at the PMC during their annual Next Gen Game. There will be a new look and voice in the locker room, in the general manager’s chair, and in the scout’s box as the Petes will welcome eight new hockey personal ranging from 5-12 years of age.

If your kid(s), or you know someone who has kids that you think will could fill in the following positions, sign them up!

Think you got what it takes to become a part of the Petes Next Gen game? Apply now by completing the audition below:

What Fans can Expect:

Please contact Ian MacGregor for ticket discounts as low as $15 at: imacgregor@gopetesgo.com.