Petes get Back in Win Column, Knock Off League Leading 67’s for Second Time this Season 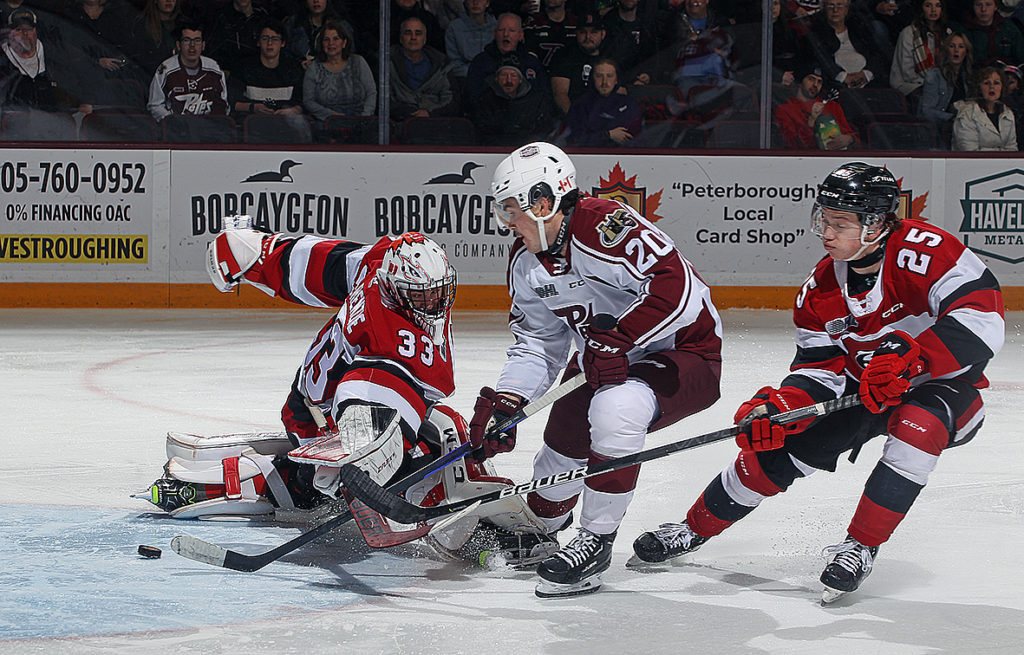 Following their worst loss of the season the night before at the hands of the Oshawa Generals, the Petes hosted the first place Ottawa 67’s at the PMC on Saturday night. It would be the third meeting between the two teams, with both teams winning a game each. Both teams were looking to get back into the win column after dropping their previous two games.

The Petes seemed determined to put last night’s loss behind them, coming out firing from the initial puck drop. Despite multiple scoring chances, 67’s goalie Collin MacKenzie would keep the game scoreless early. At the 7:13 mark of the period, Tommy Purdeller would start a give and go with Tucker Robertson leading to a Purdeller breakaway. Purdeller would make no mistake and pull the puck to the backhand to beat MacKenzie and put the Petes up 1-0. The Petes would go on to dominate the period, outshooting the 67’s 15-6, but would be unable to find the back of the net. The game would stay 1-0 heading into the break.

Entering the second period, the Petes would be shorthanded for 51 seconds against the top powerplay in the league. A couple of huge shot blocks by Konnor Smith and Shawn Spearing worked to keep the OHL leaders off the board during the penalty kill. Just seconds after the penalty expired, Cameron Tonali scored for Ottawa to tie the game at 1-1. Seven minutes later on the powerplay, Brennan Othmann would send J.R. Avon on a breakaway who would put a beautiful shot past MacKenzie to give the Petes the lead back. The Petes extended their lead at the 14:32 mark, when Brian Zanetti scored his second of the season to make it 3-1 heading into the intermission. The Petes continued to dominate in the shot department, with a 31-11 lead after the period.

The third period looked to start off perfect for the Petes, with Connor Lockhart scoring to extend the lead, but after a review the play was ruled to be offside. The game would stay 3-1 until the final 31 seconds, when Brady Stonehouse would take advantage of a pulled Ottawa goalie and powerplay to score on the 6 on 4 to make it 3-2. The 67’s pushed hard for an equalizer in the final 30 seconds, but couldn’t beat Michael Simpson. The Petes would beat the league leading 67’s 3-2 to improve to 2-1 on the season against Ottawa.

J.R. Avon and Brennan Othmann led the way for the Petes with two points each. Tommy Purdeller and Brian Zanetti both added a goal. Chase Stillman, Tucker Robertson, and Justin DeZoete all had an assist. Michael Simpson starred once again in net, stopping 23/25.

The Petes next game is their annual Teddy Bear Toss on Thursday, December 1st when the Flint Firebirds are in town. Make sure to bring your donations to fill the ice when the Petes score their first goal. Tickets can be purchased by clicking here.