Petes Get Pink in the Rink Revenge, Edge Generals 4-1 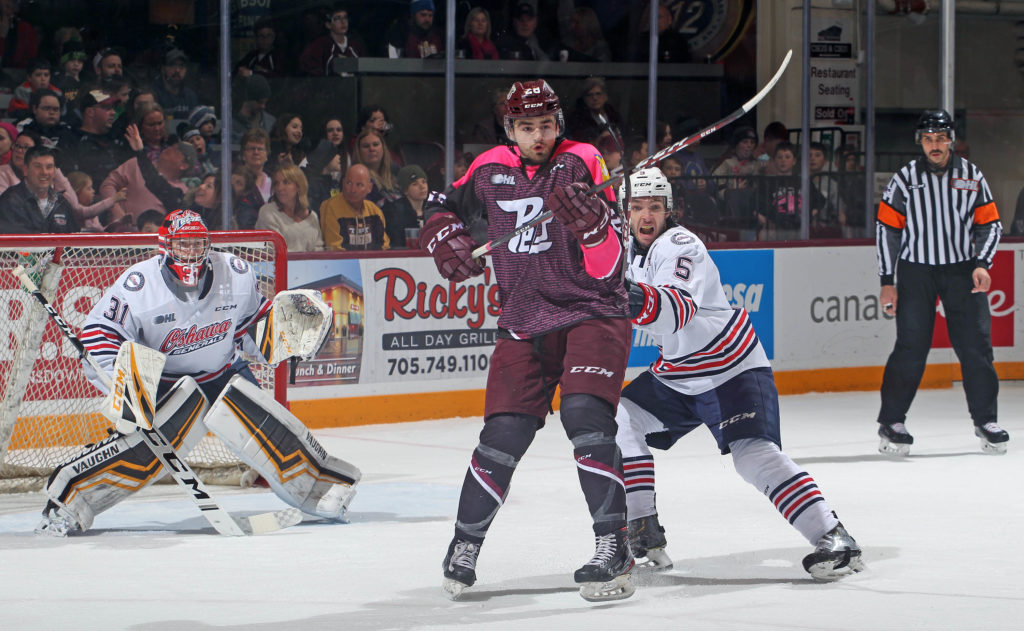 Two goals and an assist from Nick Robertson, along with Hunter Jones stopping 21 of 22 shots faced, helped kick off February in style for the Petes. Rookie goal leader Mason McTavish netted the game winning goal on the power play to edge the rival Oshawa Generals 4-1 in front of 3,816 fans at the sold out pink-filled Peterborough Memorial Centre on Saturday night. The game was Peterborough’s second straight sell-out, a first in the team’s storied 64-year history.

From the moment the referee dropped the puck to get the game underway, it was clear Peterborough was on a mission to seek revenge from Friday’s loss in Oshawa. The Lift Lock Lads were all over the Generals and made their presence known with a few big hits, followed by lots of scoring opportunities.

Shortly after entering the offensive zone, a quick Semyon Der-Arguchintsev set up allowed Hudson Wilson to fire a long point shot which was redirected by Max Grondin who was standing in front of Jordan Kooy. After a long video review, it was deemed a good goal and Peterborough was up 1-0 just minutes into the game.  SDA’s appled was his team leading 52nd assist, and Grondin’s marker tied his career-high 11 goals.

Grondin kept his foot on the gas and pressured the Generals by attacking the loose puck seconds after scoring the games first goal. While on the attack, Generals’ William Ennis was whistled for cross checking Grondin, and the Petes’ seventh ranked power play went to work.

A pair of Toronto Maple Leafs prospects, Nick Robertson and Der-Arguchintsev, worked their magic with the man advantage to set up freshman dynamo McTavish who was all alone above the hashmarks. McTavish netted his 27th of the season to make it 2-0 early in the game while Robertson picked up his 19th helper of the campaign on the goal.

Oshawa wasn’t letting the fact they were trailing 2-0 early in the game get in their heads, especially when Ty Tullio beat Hunter Jones to cut the Petes lead 2-1, two minutes later.

A big start for Peterborough as they were ahead on the score clock and out-shot the rival Generals 11-8 after the first 20 minutes.

Big start for the Petes in the opening twenty!

Just minutes into the second, both officials raised their arms to whistle Peterborough for cross checking. While on the penalty kill, Robertson picked off a Generals player at centre ice to force a breakaway. The speedy forward made no mistake as he went forehand-backhand on Kooy to extend his OHL-leading goal streak to 11 games and to give the Petes a 3-1 lead.

ROBBY! 3-1 Petes as @nickrob2001 buries a BEAUTY short-handed marker. He extends his goal-scoring streak to 11 games, which is the longest in the #OHL this season. #GoPetesGo #PInkInTheRink https://t.co/2BYrWSu20g pic.twitter.com/N5ol1Pn0qc

The Generals and the Petes traded lots of hits, shots and opportunities to keep everyone entertained,but the score remained 3-1 after 40 minutes inside the square corners. The Petes continued to out shoot the Generals 18-17.

It’s 3-1 after 40 minutes at the Mem thanks to a brilliant Robertson shorty. #GoPetesGo #PinkInTheRink pic.twitter.com/aSNjmNhuGz

At the midway point of the third, Zach Gallant used his speed which resulted in a breakaway, but was slashed on the play. The officials awarded the captain with a penalty shot, but he was unable to solve Kooy.

As the period wound down, Grondin was searching for his second goal of the night, beating Kooy but ringing the puck off the post.

While in the attacking zone, the Generals were assessed a double minor for high sticking. While down a man, Greg Walters opted to pull Kooy desperately looking for ways to beat Jones.

That plan failed when Akil Thomas picked off a Generals pass and found Robertson who netted his second of the game. His 38th goal of the season now ranks him second in the OHL for goals, and Thomas extends his assist streak to 11 games. This streak is tied for the second longest in the OHL this season, trailing only teammate Declan Chisholm’s 15-game streak to start the season.

That apple extends Akil’s assist streak to 11-games, leading the #OHL and moving him into 2nd behind only @chis_decs (15gms) for the longest streak this year. #GoPetesGo pic.twitter.com/Lsk5ZQy7Iz

The Petes were seeking redemption and they got it, taking this game 4-1.

Final shots were 27-23 in favour of Peterborough. Robertson, Der-Arguchintsev and Tullio were named the game’s First Choice Haircutters first, second, and third stars of the game, respectively. The Mark’s Hardest Working Pete was Jacob Paquette.

Peterborough will head to Kingston to take on exceptional status Shane Wright and the rest of Frontenacs team on Wednesday, February 5 at 7:00 PM before welcoming the North Bay Battalion at home on Thursday, February 6 at 7:05 PM.