Petes Get Revenge Against Frontenacs 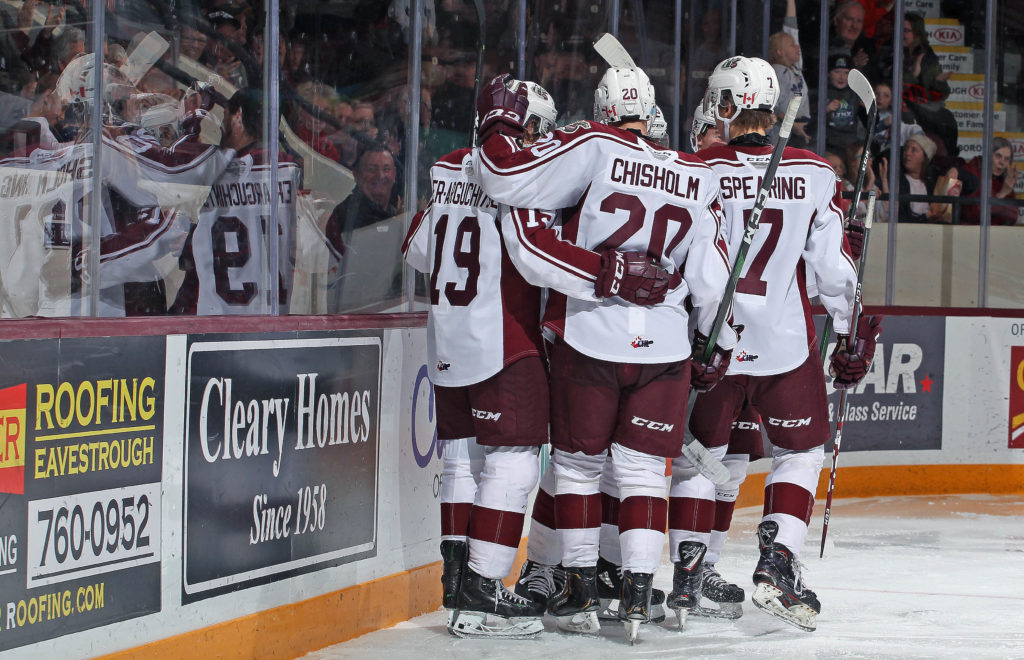 The Peterborough Petes sought and got their revenge with a 3-1 victory over the Frontenacs on Saturday night after suffering a tough loss to the same division rivals in Kingston on Friday night.

The Petes got off to a rocky start as their penalty killing unit was tasked to killing a 5-on-3 early in the game.

On the power play, OHL leader in rookie scoring and underager Shane Wright beat Hunter Jones for his 14th goal of the season to give the hot Frontenacs club a 1-0 lead.

Following a few big hits, the Maroon and White spent the final minutes of the first period in the Frontenacs zone, generating great chances, but couldn’t convert past Kingston netminder Christian Propp. The visitors led 10-8 in shots and 1-0 on the score board after the first 20 minutes of Saturday night hockey.

If only face off wins were goals! Down by 1 after 20.#GoPetesGo pic.twitter.com/mjHl28fmYA

The Frontenacs’ lead didn’t last long in the second period as Toronto Maple Leafs prospect Nick Robertson scored 2:41 into the period to tie the game 1-1. Robertson’s hard worth ethic forced a turnover and allowed him to convert on his own rebound for his 21st goal of the season.

ROBBY! @nickrob2001 deposits his own rebound behind Propp to tie the game at 1!#GoPetesGo | #LeafsForever pic.twitter.com/1vbTIdMz5J

Later in the period, Peterborough’s fifth overall power play line took to the ice after Kingston’s Evan Brand was whistled for a hooking infraction.

Having the man advantage led to Captain Zach Gallant scoring his 15th goal of the season when he banked in Declan Chisholm’s shot from the blue line for a 2-1 lead. Semyon Der-Arguchintsev’s secondary assist moved him for first place tie in the OHL with 34 assists.

GALLY! @zachgally backhands the biscuit behind Propp on the PP to give us a 2-1 lead! SDA + @chis_decs = assists.#GoPetesGo | #SJSharks pic.twitter.com/JirxRyfXHI

Head Coach Rob Wilson’s first intermission speech was promising as the league leading Petes had a bounce back period only allowing six shots on net and registering 19 shots which led to two goals.

19 shots result in 2 goals for your Petes in the middle frame!#GoPetesGo pic.twitter.com/EeKgGK2ZgG

Halfway through the third period a beautiful passing set up by Jacob Paquette and Michael Little led to 2020 NHL draft eligible Cameron Butler scoring his ninth goal of the season to extend the lead 3-1.

The Frontenacs pulled their goalie for the extra attacker but it wasn’t enough as the Petes held off to take this one 3-1.

Final shots were 41-24 in favour of the Petes. Butler, Der-Arguchintsev, and Propp were named the games First Choice Haircutter’s first, second, and third stars of the game. The Mark’s Hardest Working Pete was Nick Robertson.

The Petes begin another ‘three in three’ weekend when the Hamilton Bulldogs roll into Lift Lock City on Thursday, December 12 at 7:05 pm. The Petes will then visit the rival Oshawa Generals on Friday, December 13 in Oshawa before battling the Niagara IceDogs at the PMC on Saturday, December 14 at 7:05 pm.