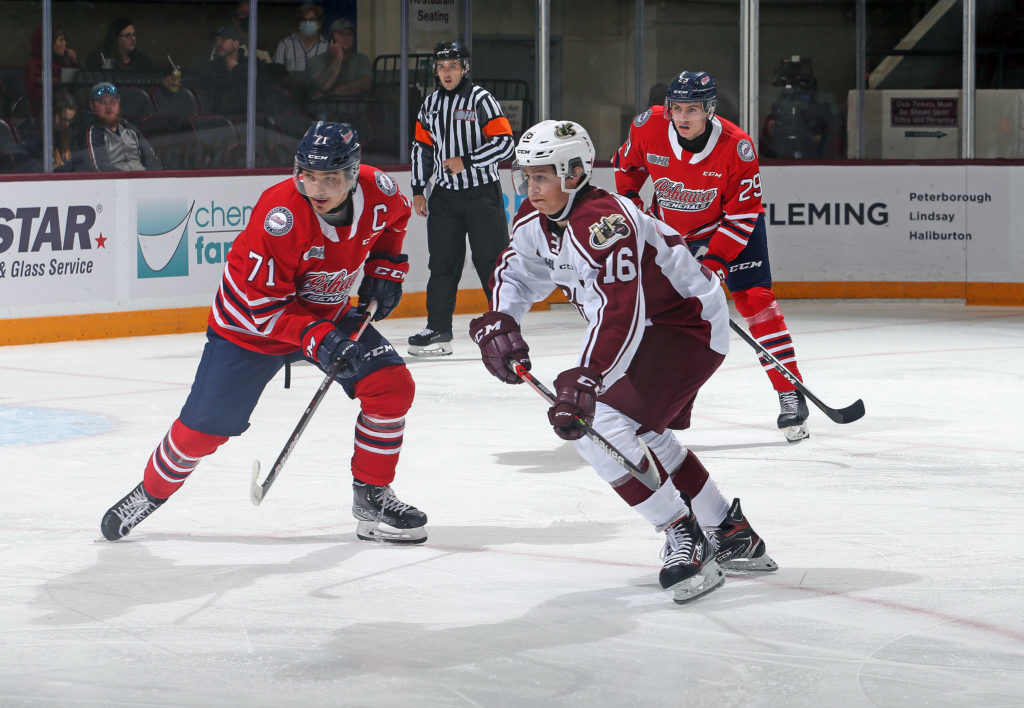 The Petes successfully sought revenge tonight against the Generals with a 5 -2 win at the Peterborough Memorial Centre. Joe Carroll scored two goals, while J.R. Avon, Justin DeZoete and Tucker Robertson contributed offensively. This is the second time the greatest rivalry in junior hockey clashed this season, out of 12 meetings.

Notably defenceman and newest captain of the Peterborough Petes, Shawn Spearing returned to the lineup, for his first appearance of the 2021-22 regular season. This evening the Petes honoured a variety of local first responders.

The newest member of the Petes, Joe Carroll opened the score at 1:32 off a pass from Petes Alternate Captain, Tucker Robertson. Local Pete Avon nearly followed up at 2:30 will a rush down the ice, but the post and Leaver prevented a second goal for the Petes.

.@joe_carroll19 gets his first as a Pete!

Assists go to Robertson and @ksmitty91 as we have an early lead! #GoPetesGo | #GameON pic.twitter.com/hQ3DucxXmP

The boys in the Electric City brought the heat throughout the entire first period but it was a goal from Gens captain, Ty Tullio that evened up the score. The game ended with some classic 115 rivalry roughness as Petes d-man Donovan McCoy took a penalty for holding and the Gens right-wing, Tye McSorley for cross-checking at 17:45.

The opening minute of the second period started with Gens, Dawson McKinney heading to the sin bin for 4:00 minutes following a high sticking. Although the Petes failed to capitalize on the extended power play a quick backhand pass from Robertson was converted into a goal for the Petes courtesy of Avon.

#BringItToBroad prospect with the clean-up in front to give the Petes a 2-1 lead! Assists go to Carroll and Robertson! pic.twitter.com/pZv9UVof62

Although the second period saw even time in each team’s end, Carroll tucked one in past Leaver at 9:54 giving the Petes a dangerous two-goal lead.

The Petes would play 10 seconds down two men when Kaspars Ziemins was called for boarding at 14:44, however that would pose no issue as the Lift Lock Lads killed back-to-back penalties.

A scrum in the Petes’ blue paint saw the physicality of the game increase however it didn’t ruffle the feathers of steadfast netminder, Simpson. Moments later, Gens’ Gagnier scored to cut the Petes lead by one before the second intermission.

As the Petes headed into the final frame ahead by one, this period was all Petes. Halfway through the third, DeZoete fired a one-timer from Samuel Mayer, which deflected off a General for a 4-2 lead. His second goal of the year was credited to Mayer and Sproule.

Justin DeZoete fires a one-timer and it bounces off a General to give us a two-goal cushion! Assists go to @Emmett9393, @Samuel6Mayer, and obviously, a General 👍🏻 pic.twitter.com/8GM3Ssx2BS

As frustration and desperation continued to grow for the Generals, they pulled their starting netminder  Leaver with over two minutes of hockey left. Robertson fired the puck in the empty netter for his third of the season. Sproule picked up his second assist of the night in back-to-back goals.

Robertson scores his third goal of the season to seal tonight’s win against the Generals! @Emmett9393 picks up his second assist of the night! pic.twitter.com/D9yHEldbvR

The Petes skated to a 5-2 victory, tying the season series 1-1. Carroll, Robertson, and Ty Tullio were named the games first, second, and third stars. Michael Simpson was named Mark’s Hardest Working Player of the game. final shots were 29-28 in favour of Peterborough.

The Petes head to Kingston to face Shane Wright and Frontenacs before welcoming the Hamilton Bulldogs for Scooby-Doo night next Thursday, October 28 at 7:05 pm.