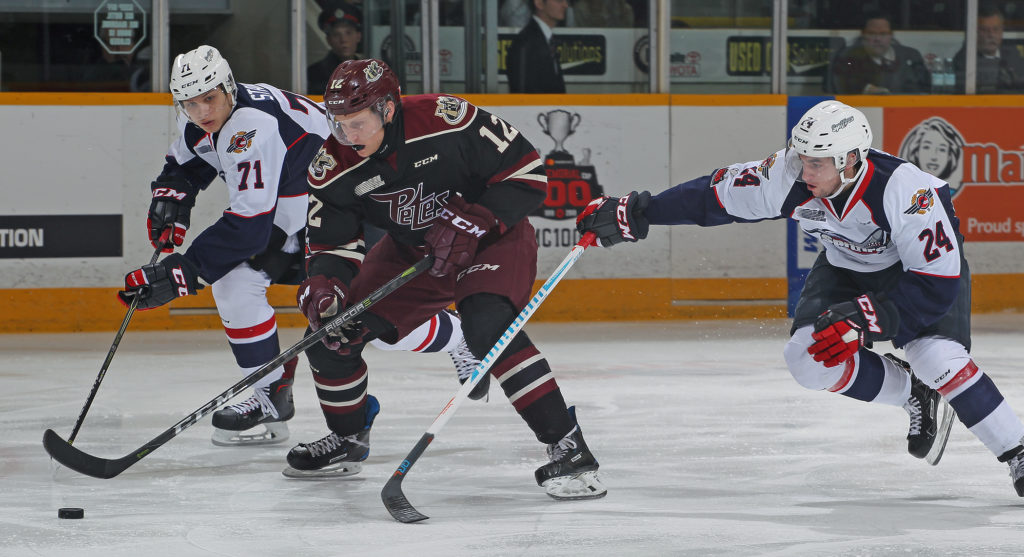 The Petes kicked off a Western Conference road swing with a bang, defeating the Spitfires 5-1 in Windsor on Thursday night.

It took the Petes 7:09 to get their first shot on net, but they made it count. After picking up the puck off the boards in his own end, Nick Robertson played give-and-go with Chris Paquette before rifling a shot over Colton Incze’s blocker.

ROBBY! @nickrob2001 starts and finishes the play with @Chris_paquette9 making it 1-0 Petes on our first shot of the night!#GoPetesGo pic.twitter.com/8RcaFT33Ku

The Spitfires were awarded the first power play of the evening after Robertson closed his hand on the puck, and would capitalize on the chance. Windsor broke into the offensive zone, with Cole Purboo moving the puck to Connor Corcoran on the blue line. Corcoran would find Will Cuylle in the circle to Jones’ right, who snapped a shot into the top corner of the cage to tie the game at 1 at 15:51.

Although the shots on net were far from the same, the score was even after 20 minutes of play.

So we had a great shooting percentage in the first frame 😁#GoPetesGo pic.twitter.com/wGGwclFml0

The Petes were handed their first man advantage 2:18 into the middle frame as Sean Allen was called for checking to the head. Clad in their cream jerseys, Peterborough managed a handful of shots on Incze but were turned away.

Brady Hinz appeared to restore his team’s lead shortly after but, after a long review, the goal was disallowed as it was deemed to be kicked in.

Chad Denault, however, brought the Petes back in front at 8:04 with his seventh marker of the season. A smart play by Liam Kirk to send the puck deep into Spitfire territory saw Semyon Der-Arguchintsev backhand the puck to Denault in the slot.

DENNY! @Denault17 leans into an SDA pass out of the corner and we’re back in front! 2-1 Petes!#GoPetesGo pic.twitter.com/8L3ZXIFSqA

The Spitfires were penalized twice, and the Petes once, to close out a much more offensive stanza for the visitors.

A handful more infractions were taken by each team to open the third period. While down a man, Denault and Zach Gallant combined to extend Peterborough’s lead to 3-1 at 8:16. The goal would mark Denault’s first multi-goal game of his career.

DENNY!!! Windsor coughs up the puck at the blue line, so @zachgally takes off and @Denault17 scores short handed! 3-1 Petes!#GoPetesGo pic.twitter.com/i2BMcrU5oQ

Paquette followed up 4:01 later with his 26th of the campaign, unassisted.

Visibly frustrated, the Spitfires took three penalties in five minutes in the back half of the frame. Kirk capitalized, securing the Lift Lock Lads’ 5-1 victory.

KIRKYYYYY 🇬🇧! @kirky_1424 adds an empty netter to seal a 5-1 win over Windsor for your Petes!#GoPetesGo pic.twitter.com/ekCWgh4bfu

Final shots were 30-19 in favour of Windsor.

The Petes continue their Western Conference trip with games against the Flint Firebirds on Saturday, March 2 a 7:00pm and the Saginaw Spirit on Sunday, March 3 at 5:30pm. They will return home next Thursday March 7 to play the Kingston Frontenacs once again. It’s a 7:05pm start. Tickets are available through the Baker Tilly Box Office in person, over the phone at (705) 743-3561, and online.