Petes Hang On to Take Down Gens 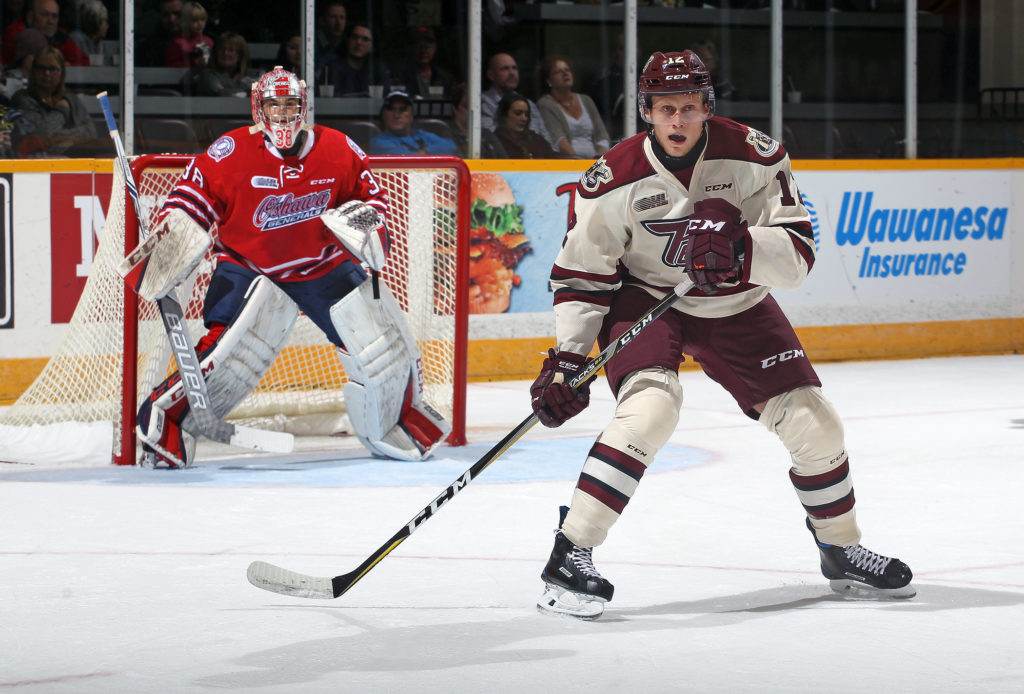 The Peterborough Petes head into their third and final game of the weekend in first place in the Eastern Conference after a hard-fought 2-1 victory over the rival Oshawa Generals in the first of eight match ups this season.

Before the game, as part of Alumni Homecoming presented by Gibson’s Finest Canadian Whisky festivities, Petes fans were treated to all-you-can-eat pizza and a question and answer period with members of the 1979 Memorial Cup Champion Petes.

It was Brady Hinz that cracked open the scoreboard with help from Declan Chisholm and Cameron Butler to hand the Petes an early 1-0 lead.

Nearly midway through the first frame, the Generals responded to tie the game. Nando Eggenberger beat the Petes to the puck behind their goal line and fed Montreal Canadiens prospect Allan McShane who was left alone in front of Hunter Jones.

Adam Timleck was charged with hooking toward the end of the first period, which his teammates kindly killed off.

How fitting – Petes and Gens tied at 1 after 20 minutes. We’re in for a fun one, Petes Nation!#GoPetesGopic.twitter.com/O3jI6xpWJs

After failing to convert on a man-advantage opportunity a few minutes into the middle stanza, the Petes were afforded another power play as Oshawa was penalized for interference. Chisholm, a Bowmanville native, got his second point of the evening after sending the puck from the blue line past Kyle Keyser.

CHIZ!! A back-and-forth with SDA then @chis_decs sends the puck through the slot and past Keyser on the PP! @Pavel_gogolev17 credited with a helper, too. 2-1 Petes!#GoPetesGo pic.twitter.com/qq87NOMwaM

The clubs exchanged a pair of minor infractions to close out the second period, but the ‘Boro boys held on to a 2-1 lead through 40 minutes.

We’re up by 1 after 40 minutes in Oshawa! Nail biter, that’s for sure. Tune in for the 3rd!#GoPetesGopic.twitter.com/jHgQQLAPuD

Heightened physicality produced another pair of two-minute penalties, resulting in unsuccessful 1:32 power plays for the rivals. Another Petes infraction 8:26 into the final period led to a near tally for Oshawa. After a request from the Peterborough bench, Oshawa’s zone entry prior to the goal was deemed offside.

Increased pressure in the form of shots was no match for Jones, who stood tall to crashes in his crease.

Oshawa added an extra skater with 1:50 remaining in the game in an effort to net the equalizer, but to no avail.

Final shots were 46-25 in favour of the Generals. Jones, McShane, and Chisholm were the first, second, and third stars, respectively.

Petes Hang On to Take Down Gens

The Petes play their third game in as many days on Saturday, October 13 at 7:05pm when they host the Windsor Spitfires as part of Alumni Homecoming presented by Gibson’s Finest Canadian Whisky. The 1979 Memorial Cup Champion Petes will be honoured in a special pre-game ceremony, and more than 65 alumni are expected to be in attendance for the game. Tickets for the game are limited but remain available through the Collins Barrow Box Office in person and over the phone at (705) 743-3561 beginning at 1:00pm Saturday, and 24 hours a day online.