Petes Hold Off Colts for Victory in Barrie 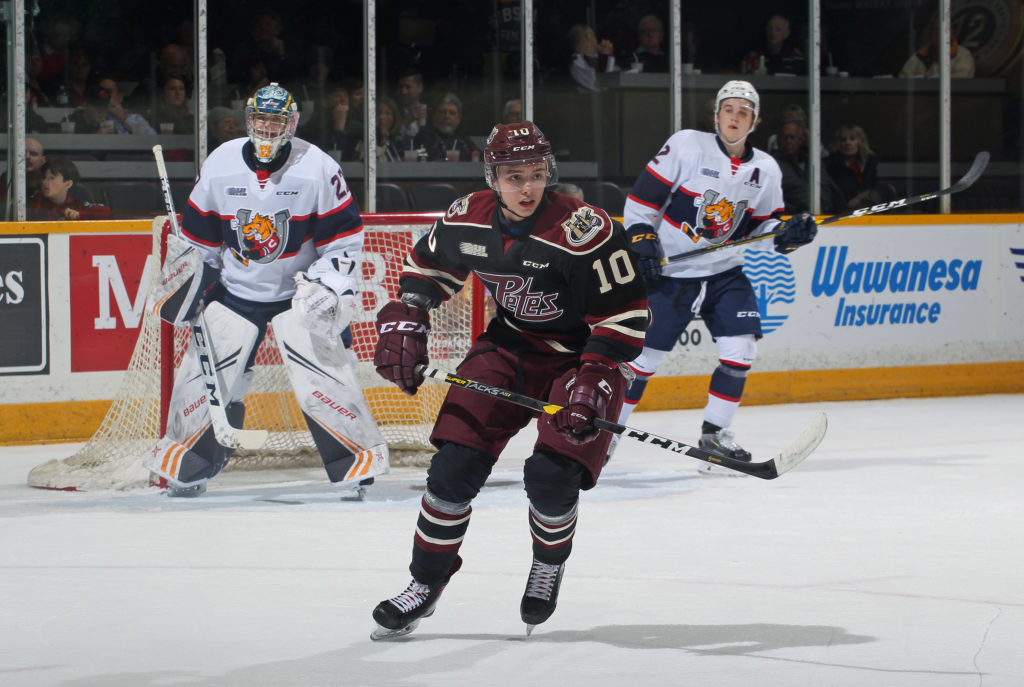 The Petes have brought themselves within one point of a post-season berth after holding off the Colts on Saturday night after earning a 5-4 win in Barrie.

Just 34 seconds into the match, the Petes were assessed a 4 minute minor for high sticking, sending the Colts to an early man advantage. Take advantage they did, as Barrie scored two power play goals, 36 seconds apart, to jump out to a 2-0 lead.

Barrie’s opening marker came from their captain, Jason Willms, with Ben Hawerchuk and Tyler Tucker assisting. After it bounced off of a Petes defenceman’s skate, Willms slapped the puck past Petes net minder Hunter Jones.

Still on the power play, Hawerchuk backhanded the puck into the slot for Tyson Foerster to slip through Jones at, leaving the Petes down by a pair 1:31 into the night.

It took a few minutes for the maroon and white to reset, but Ryan Merkley responded for his club. Liam Kirk and Semyon Der-Arguchintsev set up the San Jose Sharks prospect at 7:11 to cut Barrie’s lead in half.

MERKS! SDA works the puck along the boards to @kirky_1424 before @ryan_merkley goes post and in! 2-1 Colts.#GoPetesGo | #SJSharks | #OurPack | #LeafsForever pic.twitter.com/M0yMrvlv6P

Into the second half of the period, Peterborough was sent to a 5-on-3 power play. They converted and tied the game at 2 at 14:40 as Merkley and Zach Gallant assisted on Nick Robertson’s 25th goal of the season.

The period ended with Peterborough in strong command of the shot clock, out shooting the home team 22-11 in the opening 2o.

A rough start to the frame, but we’re right back in it!#GoPetesGo pic.twitter.com/h7xKmgH7pp

The Petes took their first lead of the game just 12 seconds into the middle frame. Although the play had to be reviewed, Gallant knew that his one-timer, set up by Brady Hinz, hit the back of the net. Michael Little earned an assist on the go-ahead goal as well.

GALLY! @BradyHinz with a pretty pass from down low to @zachgally in the slot. The captain calls the goal before it’s confirmed by officials. @mlittle00 with an assist, too. 3-2 Petes!#GoPetesGo | #LGRW pic.twitter.com/lpNDSI1JiP

A combined ten penalties between the clubs preceded Peterborough’s fourth goal and Merkley’s second of the night. His 13th of the season marked Merkley’s first multi-goal game as a Pete and third of his career. Robertson and Adam Timleck collected helpers on the milestone marker at 12:50.

MERKS! @nickrob2001 leaves a gift for @ryan_merkley in the high slot and he blasts the puck past Greaves! @AdamTimleck assists as well. 4-2 Petes!#GoPetesGo | #SJSharks pic.twitter.com/SUfer6PvkE

Ryan Suzuki answered back for Barrie 54 seconds later. Jones made an initial save, but Foerster and Aidan Brown connected to find the 2019 NHL Entry Draft prospect alone in front, cutting Peterborough’s lead to 4-3.

There’s a lot on the line in this game, and both teams are playing like it.#GoPetesGo pic.twitter.com/XxyZh2GCOf

The Colts were rewarded a with a 5-on-3 chance of their own in the early moments of the third, leading to a flurry of chances for the home team. A Colts goal was called off after being reviewed for offside, but another goal by Suzuki would stand, bringing the game to a 4-4 tie.

A more disciplined third paid off for the Petes as they scored the period’s only goal. Cameron Butler netted the 18th of his rookie season, unassisted, to secure a 5-4 road win for his team.

BUTSY! Great forechecking by @CButler_21 is rewarded with a turnover and the rookie rifles a shot past Greaves! 5-4 Petes with 8:32 to play!#GoPetesGo pic.twitter.com/jsW7ZRA26z

The Petes wrap up their weekend in North Bay as they face the Battalion on Sunday, March 10 at 2:00pm. A win on Sunday will secure a playoff berth for the Petes. They’ll be back in action on home ice on Thursday, March to take on the Ottawa 67’s at 7:05pm. Tickets are available through the Baker Tilly Box Office in person, over the phone at (705) 743-3561, and online.