Petes in the Playoffs: An NHL postseason primer for fans of the maroon and white 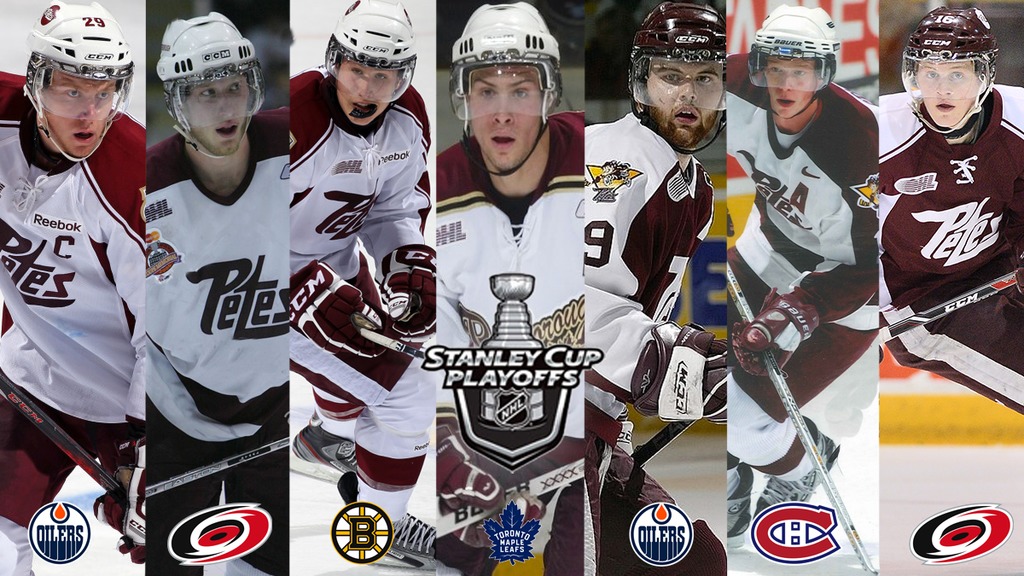 It’s no secret that some of hockey’s brightest stars come from the OHL. With dozens of alumni currently suiting up for their respective NHL and AHL teams, the league has long been a hotbed of exceptional hockey talent. Of course, the Peterborough Petes have one of the more illustrious lists of well-known players making noise at the game’s highest level.

As we look towards the NHL playoffs, fandom is sure to be tested. Maybe you’re a lifelong Senators fan whose dreams have been shattered by a subpar season. Or, maybe you’re a Buffalo Sabres fan distraught by another losing effort. Either way, here are five teams that proudly boast former Petes on their roster for you to cheer for ahead of the postseason:

Once a staple of the maroon and white, the Orangeville, Ont. product netted 15 goals and 11 assists this season in Boston, often playing alongside QMJHL alum Charlie Coyle and Sean Kuraly. In Peterborough, Ritchie appeared in 189 games, racking up 87 goals and 181 points. While most Ontarian fans might find it difficult to cheer for the Bruins, Ritchie represents a fan-favourite who is making his mark in the NHL.

Petes fans know what Ritchie can do in the playoffs; in 2014, he scored a dramatic overtime winner against the Kingston Frontenacs in Game 7 of the Eastern Conference quarterfinal, making the Petes the fourth OHL team in history to come back and win a series after losing the first three games of the series.

Petes fans are well-equipped to cheer for the Canes this year, especially given the familiar names that grace their lineup on a nightly basis. Between the two of them, Lorentz (‘13-’17) and Staal (‘04-’06) combined for 18 goals and 28 assists this season, helping Carolina secure the top spot in the Discover Central division.

In Peterborough, Staal’s dominance earned him an invitation to the 2006 CHL Top Prospects Game. All told, the Thunder Bay, Ont. native scored 37 goals in 134 OHL games and was a member of one of the Petes’ most statistically successful rosters, before being selected second overall by the Pittsburgh Penguins in the 2006 NHL Entry Draft.

While less extravagant than his current Canes teammate, Lorentz scored 29 goals in his final year in the OHL, finishing his junior career with a cumulative total of 164 points and 13 playoff goals. Between Lorentz’s sneaky skill and Staal’s leadership, the Petes influence is evident on the roster of one of the NHL’s scariest clubs.

Much like his younger brother Jordan, Eric (‘00 – ‘03) also made his mark in the maroon and white. Not only did he lead the Petes in scoring in his final junior season, but was also named to the CHL First All-Star Team, earning him a second overall selection by the Hurricanes in the 2003 NHL Entry Draft.

Now a veteran of the NHL, the eldest Staal helped the Habs down the stretch, contributing two goals in 21 games after being traded from Buffalo. As a perfect foil to the young and energetic Nick Suzuki and Cole Caufield, Staal is sure to serve the Habs well in their trek towards a championship.

#PetesAlumnus Eric Staal is now a member of the Habs 😎 https://t.co/tLAbQAUJES

A team-first defenceman with a flair for physical dominance, Bogosian was one of the Leafs’ most discrete pickups last offseason, appearing in 45 games before being sidelined due to a shoulder injury. Petes fans may have to wait a bit to see him in the postseason, as his injury will likely keep him out of first-round action.

As a Pete, the man they call “Bogo” scored 18 goals and added 76 assists in 127 games spread across two seasons. In 2008, he was drafted third overall by the now-defunct Atlanta Thrashers and went on to play for Winnipeg, Buffalo, and Tampa Bay before settling in Toronto. A Stanley Cup champion as a member of the Lightning, Bogosian brings leadership, stability, and maturity to a young Leafs locker room.

A proud former Pete, Kassian is well-known for his physical and gritty play on the ice, a trait that comes in handy given that he plays with Connor McDavid, perhaps the best player in the league. This season, he appeared in 27 games for the Oilers, totalling five points.

As a Pete, Kassian established himself as a physical force, sitting in the penalty box for a staggering 268 minutes in 152 games and totalling 111 points. Given the always-aggressive nature of playoff hockey, Kassian’s physicality will no doubt come in handy and make for exciting plays all around.

Watch former teammates Zack Kassian and Zach Bogosian clash for the eighth time this season as the @MapleLeafs welcome the @EdmontonOilers tonight!

While you're here, check out where other #PetesAlumni are playing around the @NHL ⤵️ pic.twitter.com/ODlsSRCWCN

A newer member of the Oilers, Koekkoek (‘10-’13) appeared in 131 games for the Petes, tallying 18 goals and 51 assists before being traded to the Windsor Spitfires. The native of Winchester, Ont. has appeared in 18 games for the Oilers this season, scoring one goal. These days, he’s often seen paired with former Seattle Thunderbird Ethan Bear on the third defense pairing.

As a bonus, we are keeping our eyes on the Panthers (‘95 – ‘97), Lightning series as both flex some Petes leadership behind the scenes with Shawn Thornton at the helm of the Florida’s business operations squad, and Tampa’s roster still largely the product of Steve Yzerman’s (‘81-’83) decision making.

The Petes web is thriving and apparent this NHL postseason and fans of the maroon and white have a lot of exciting hockey to sustain them, ahead of puck drop at the Memorial Centre this fall.