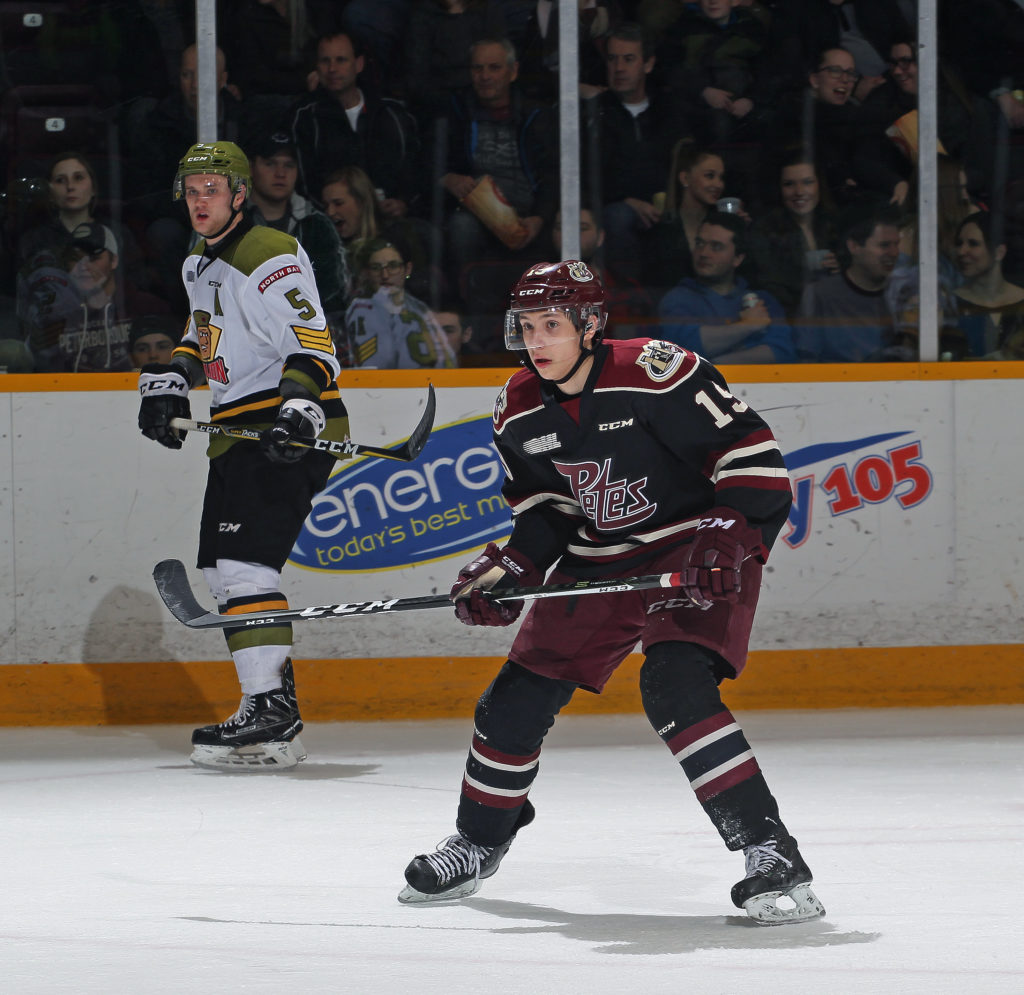 The Petes kicked off an historical road trip on the right foot on Thursday night with J.R. Avon scoring his first OHL goal en route to a 5-2 over the Battalion in North Bay.

In the early goings of the game, Hunter Jones was thanked his goal posts as he got a piece of a Battalion point shot that rattled off the right post, keeping the Battalion at bay.

For the third straight game the Maroon and White were the first to crack the scoreboard, but for the first time in his OHL career it was local product J.R. Avon to do so.

Following the play into the zone, Avon positioned himself in front of North Bay’s net and was gifted a right pad rebound from Battalion netminder Joe Vrbetic off an initial shot by Matt McNamara. Declan Chisholm earned the second assist on the opening marker.

The game continued with balanced play into the final minutes of the period before the Troops got themselves on the board.

After chasing a dumped puck, Mason Primeau worked it out of the corner to the blue line and later tipped a point shot from Braden Henderson, assisted as well by Pacey Schlueting, to solve Jones and tie the game at 1.

Things were fairly even in all aspects between the conference rivals through 20 minutes of play in North Bay.

Except for one more shot on goal, we’re tied up across the board after the first!#GoPetesGo pic.twitter.com/wIBd65YyEr

Peterborough was afforded their first man advantage of the night, and although they couldn’t officially convert on the chance, another Petes rookie scored to restore his team’s lead.

7:40 into the middle stanza, and one second after North Bay’s infraction expired, McTavish hit the score sheet for the third time this season. David Maier and Jacob Paquette broke out of Peterborough’s zone in dying seconds of the power play. After a shot by Paquette rebounded out into the slot, McTavish cradled the puck until releasing a quick wrist shot past Vrbetic to bring the score to 2-1 for the Lift Lock Lads.

TAVY! Patience pays off for @masonmctavish27 as he goes five-hole on Vrbetic just after the power play expires! Assists to @j_paquette6 and @david_maier17. It’s 2-1 Petes!#GoPetesGo pic.twitter.com/O3S35WlJDU

As they’d done in the first, North Bay would tie the game late in the period. With his team on their second penalty kill of the night, Brad Chenier picked up a turnover at the Petes blue line before springing Luke Moncada to a shorthanded breakaway, evening the score at 2-2 with 44 seconds left in the frame.

The Petes were breaking away on the shot clock and in the face off circle after two periods of play, but the score remained tied.

It was a fast and hard found final period in North Bay, and it would be an advantageous one for Peterborough.

The Petes started the third with a 52 second 5-on-3 power play and five forwards on the ice. Unable to find the back of the net on that man advantage and two more despite a flurry of shots, Nick Robertson finally beat Vrbetic to record the game winning goal. Fellow Leafs prospect Semyon Der-Arguchintsev was fed the puck by Robertson before moving it to Chisholm on the point. Robertson picked up Chisholm’s rebound and backhanded the puck high into North Bay’s net with 4:53 left into the game, with Peterborough now ahead 3-2.

ROBBY! @nickrob2001 starts and finishes the play then backhands the biscuit past Vrbetic to put the Petes in front! Helpers to @chis_decs (his second of the night) and SDA. 3-2 Petes!#GoPetesGo | #LeafsForever pic.twitter.com/2S8bnKCO5o

Thirteen seconds later, McTavish insured Peterborough’s win with his second of the night, marking his second multi-goal effort in just four games. The rookie planted himself in the crease in order to clean up a loose puck, unassisted.

TAVY TIMES TWO! @masonmctavish27 adds some unassisted insurance after banging the loose puck into the net! 4-2 for the Maroon and White!#GoPetesGo pic.twitter.com/7Bkigj0fcG

Der-Arguchintsev added his second point of the night, and first goal of the season, with an empty netter with 2:23 remaining to seal his team’s 5-2 win.

Final shots on goal were heavily in favour of the Petes at 46-31.

The Petes continue their lengthy road trip tomorrow, October 4, as they visit the Wolves in Sudbury at 7:05pm before facing the Soo Greyhounds on Sunday, October 6 at 2:07pm.