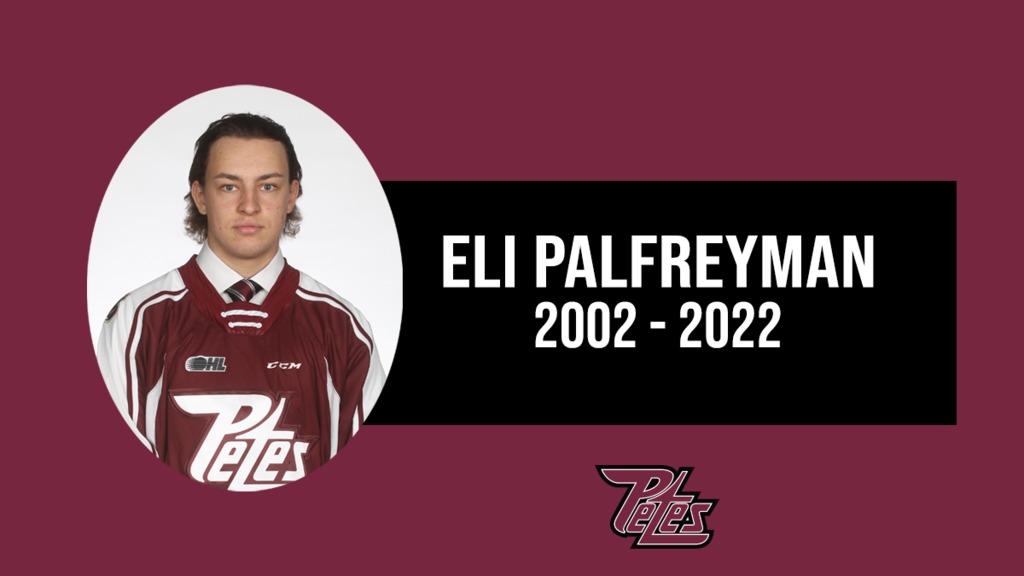 The entire Peterborough Petes organization is saddened to learn about the passing of Petes prospect, Eli Palfreyman, on Tuesday.

Eli was selected by the Petes 223rd overall in the 12th round from the Cambridge Hawks in the 2018 OHL Priority Selection. The Cambridge, Ont., native was captain of the Greater Ontario Junior Hockey League’s (GOJHL) Ayr Centennials. He passed away during a pre-season tournament game.

The forward has attended several Petes Training Camps and Development Camps since being drafted by the Petes. Eli was also a high level soccer player growing up, and was also a baseball enthusiast.

The Petes would like to extend our sincerest condolences to the entire Palfreyman family, Eli’s past and present teammates, his friends, and members of the many hockey and non-hockey communities to which he contributed.

“Our deepest sympathies go out to Eli’s family and all of his teammates and staff with Ayr. We’re keeping them in our thoughts and prayers” commented Peterborough Petes GM, Michael Oke.

The Peterborough Petes are the oldest continuously operating team in the Ontario Hockey League, having won nine OHL championships and one Memorial Cup championship over 66 years. The Petes have graduated over 180 players to the National Hockey League. For more information, visit www.gopetesgo.com and follow the Petes on Facebook (facebook.com/petesOHLhockey), Twitter (twitter.com/PetesOHLhockey), TikTok (tiktok.com/@petesohlhockey) and Instagram (instagram.com/petesohlhockey).