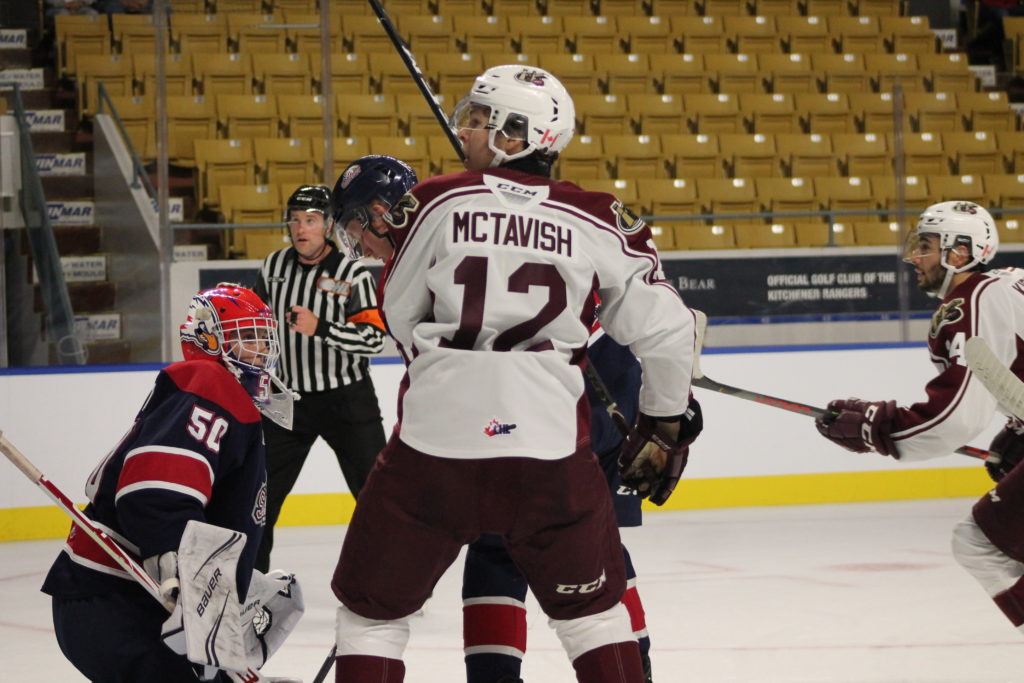 The Petes Pre-Season presented by CIBC Wood Gundy Peterborough is off to a hot start as the Maroon and White skated to an 8-5 victory over the Saginaw Spirit in Kitchener on Friday afternoon.

The Petes started off the opening period with lots of passing and generating opportunities. A deflected shot went off of Hunter Jones’ pad and created an opportunity for Blade Jenkins and the Spirit converted on a Petes penalty kill 9:25 into the first frame.

Cardwell went off for tripping and the Petes generated plenty of opportunity and lots of scoring chances, but not before the penalty expired.

Declan Chisholm left the puck for Cameron Butler, and his wrist shot beat Ivan Prosvetov to cut the Spirit lead in half with just over a minute remaining in the opening frame.

After the first period, the Petes are behind by one goal.#GoPetesGo pic.twitter.com/2rRomfKhQw

The Petes continued to build their momentum on Butler’s late first period goal with Nick Robertson’s beautiful toe drag snipe on a two-on-one, 38 seconds in the second period to tie the game at 2.

Semyon Der-Arguchintsev heard Robertson call for a pass as he was all alone out front, which resulted in a cross-crease pass to him for a one timer goal for his second of the game. Chisholm got the secondary assist for his second assist of the afternoon.

A minute later, Saginaw’s DJ King puts the puck past Jones to tie the game at 3, with 1:52 left in the second.

Liam Kirk found rookie Mason McTavish in front with seconds remaining, but his one-timer wasn’t enough to beat Prosvetov and the buzzer sounded to end the second frame.

Early in the third, Peterborough native Matt McNamara used his speed as he entered the attacking zone, but his shot went wide, enough for McTavish to pick up the puck and find Kirk alone out front. Kirk’s one timer put the Petes up 4-3 and McTavish picked up his first assist and point as a Pete.

A penalty to each of the Petes and Saginaw resulted in some 4-on-4 action. Gallant’s clean faceoff win in the offensive zone led to Butler’s one-timer goal, his second of the game. The insurance goal brought the Petes up 5-3 with over 13 minutes left in the third.

A wrist shot by Saginaw’s Nicholas Porco found the back of the net as traffic was busy in front of Jones.

Strong offensive possession from Saginaw resulted in Jenkins registering his second goal of the game, tying the game at 5.

Kirk’s second of the game, which would be the game winning goal, came off a beautiful set-up from Butler to bring the Petes ahead 6-5 with over 12 minutes left in the game. This was Butler’s third point of the game.

Kirk, fresh out of the penalty box, fired a shot that rebounded wide of Prosvetov, in time for Petes Captain Gallant to convert on the rebound to give the Petes additional insurance with less than four minutes left in the third.

A neutral zone turnover by Saginaw resulted in Robertson completing the hat-trick with an empty netter with 1:33 left to play.

Final shots were 43-35 in favour of Saginaw.

The Petes Pre-Season presented by CIBC Wood Gundy Peterborough continues in Kitchener on Saturday, August 31 at 2:00pm against the North Bay Battalion. Fan can follow along on Twitter by following @PetesOHLhockey.

Flex pack holders can redeem their vouchers for regular season games starting on August 30 at 9:30 am. Season tickets are available starting at just $270. For more information about season tickets and flex packages for the 2019-20 Petes season, contact Mike at (705) 743-3681 x 263 or by email.