Petes Outduel Wolves in Physical Contest at the PMC 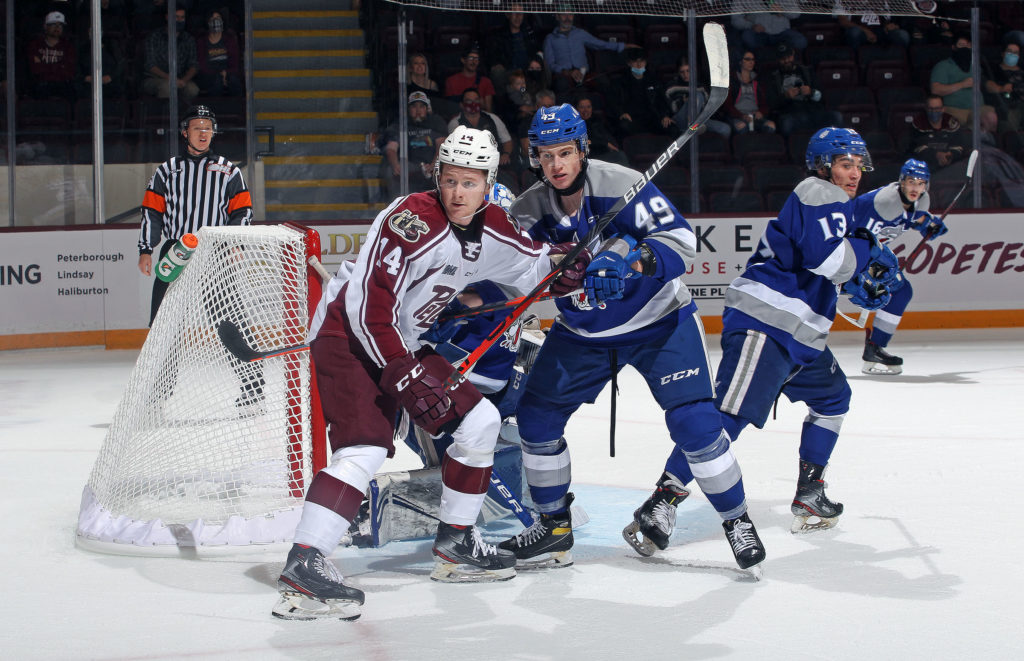 An unexpected appearance by Michael Simpson and offense led by Tucker Robertson lifted the Peterborough Petes past the Sudbury Wolves 5-3 on Thursday night at the Peterborough Memorial Centre.

The game started out as a chess match with both teams refusing to give up any chances and both eliminating space on the ice. Artem Guryev’s shot in the first couple minutes was the only attempt recorded until Sudbury’s offensive leaders generated five shots in a span of one minute and 14 seconds halfway through the first period.

Tye Austin started in net. He did all he could to repel the Wolves’ barrage, but Evan Konyen’s tip redirected the puck under Austin’s arm to put Sudbury ahead 1-0. Peterborough battled back, creating offensive opportunities, but Wolves goaltender Mitchell Weeks turned aside all eight shots he faced that period.

The Petes quickly responded in the second frame. Robertson wristed a puck high over Weeks’ shoulder from the top left circle 22 seconds into the period to tie the score up 1-1. He was assisted by Emmett Sproule and Guryev.

The game became a lot more physical in the second period. Both teams delivered hits to gain momentum and players battled for every inch of the ice. A deflection attempt in front of Austin resulted in a stick injuring the goaltender and he headed straight to the locker room. He did not return to the game. Austin registered 12 saves on 13 shots in 25 minutes and 36 seconds of action.

For the next six minutes, the clubs traded chances. However, Sudbury defenceman Nathan Ribau capitalized on his opportunity to score his first goal of the season. As the puck slid into the high slot, Ribau corralled it with his stick and skated toward the right circle for a snap shot that trickled underneath Simpson’s body despite the goalie making the initial save. The Wolves took the lead 2-1.

Brian Zanetti got called for a tripping penalty 17 seconds later. With a man down, Peterborough’s forwards disrupted Sudbury’s power play unit to even up the score once again. Robertson pitched the puck across the Petes blue line to a streaking Keegan McMullen who skated hard down the left side with the puck on his forehand and snapped it high far side to make the score 2-2.

The Petes did a great job of holding Sudbury’s top players down, but 2021 OHL Priority Draft selection Quentin Musty broke through at the 13:24 mark. Nick DeGrazia provided the lone assist on the play as the Wolves regained the lead 3-2.

The Petes found a way to respond throughout the evening.

Peterborough’s own first round pick from 2021, Nick Lardis, countered with his first goal of his season to even the game up, 3-3, at 14:49 of the second.

Petes 6th overall selection in the 2021 OHL Priority Selection jumps on the loose puck and fires the puck past Weeks! @Samuel6Mayer and Robertson pick up the assists!#GoPetesGo | #GameON pic.twitter.com/GvcQvcbbql

The second period closed with the teams knotted up at 3-3. It’s sometimes intimidating for a goalie to come into a game cold. Simpson demonstrated poise as he turned aside eight shots and only gave up a couple to ensure the game did not fall out of reach.

It was in the third period when the Petes seized control of the game. Sudbury blueliner Andre Anania, delivered a blindside hit to Avon, which led defenceman Samuel Mayer going after the Sudbury defenceman and the two threw a few punches before the refs separated them. Anania was given a match penalty. Avon drew a tripping penalty on the ensuing power play that gave the Petes 5-on-3 advantage. Sproule shot the puck on one knee off a pass by Robertson on a tic-tac-toe play to give Peterborough the lead, 4-3. It would stand as the game-winning goal.

TIC-TAC-W🤯AH@Emmett9393 nets his third of the season on this beautiful play! Robertson picks up his 4th point of the night and @Avonjr_1010 gets the secondary assist on the PP goal! #GoPetesGo | #GameON pic.twitter.com/k8rVzAol4W

The Wolves became more and more frustrated. They elevated their physicality, but Peterborough had tilted the ice too much in their favour. Sudbury called a timeout with a face off in the Petes zone late in the period. They pulled the goalie, but Ziemins scored with two minutes and 22 seconds remaining with the net empty. His first goal of the season was assisted by J.R. Avon.

Simpson made 18 of 20 saves to register his first win as a Pete. Weeks stopped 16 of 19 shots faced.

The Petes will face the Kingston Frontenacs this Saturday at the PMC.

CLICK HERE TO GET YOUR TICKETS TO SATURDAY’S GAME