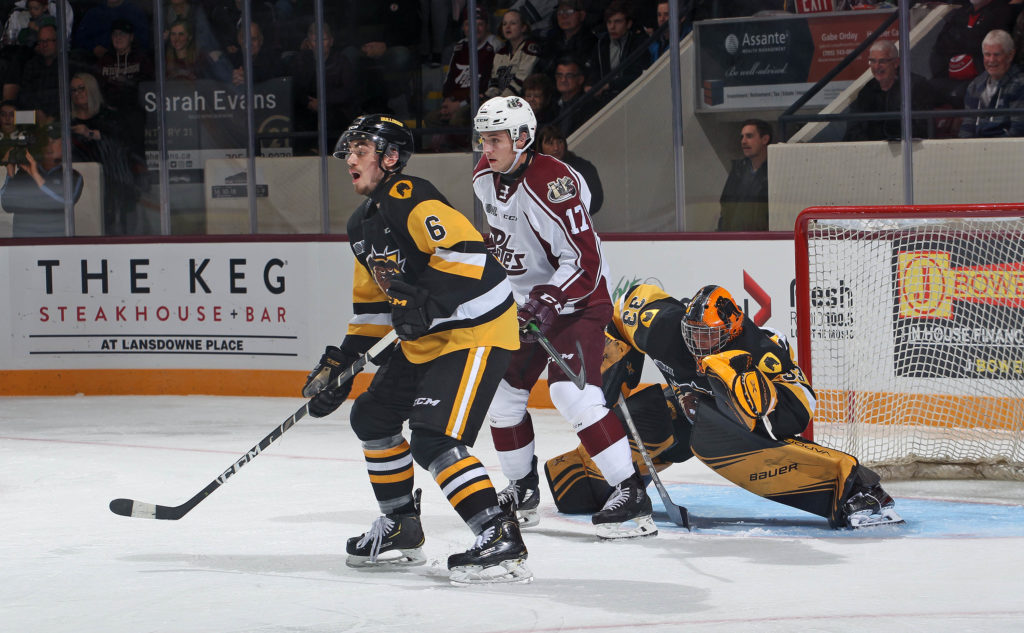 Led by captain Zach Gallant the Peterborough Petes put an end to their School Day Game drought on Wednesday, outplaying the Bulldogs to a 4-3 win in Hamilton.

The OHL’s leading scorer – before the game – went to work early to get his team on the board. LA Kings second rounder Arthur Kaliyev beat Hunter Jones from behind the goal line by banking the puck off the Minnesota Wild goaltending prospect 2:16 into the morning match up.

With the Petes out-shooting the Bulldogs 6-2 through the next few minutes, they were bound to find the equalizer. They did just that mid-way through the opening period as Tucker Robertson converted on a Keegan McMullen rebound assisted by Chad Denault, tying the game at 1 at 10:31.

The visiting Petes were assessed their first infraction of the day, sending their seventh-ranked penalty killers to work. Although they were successful in the kill, Hamilton went back ahead with an even strength goal from Jan Jenik. The Czech import extended his point streak to all 21 games of his season to bring the score to 2-1 for the Bulldogs with 1:20 left in the first.

Things were fairly balanced across the board except for the score after 20 minutes of play in Hamilton.

It was in the second period that Wednesday morning’s coffee kicked in for the Maroon and White, with captain Zach Gallant leading the offensive charge.

With former Pete Cameron Supryka in the penalty box, the Lift Lock Lads got to show off the league’s fifth-best power play unit and show off they did. A point shot from now-top scoring rookie Mason McTavish was tipped past Marco Costantini by San Jose Sharks prospect Zach Gallant to once again even the score. Winnipeg Jets pick Declan Chisholm was credited with the secondary assist on the goal scored 7:02 into the middle frame.

GALLY!! A nice redirect in front from captain @zachgally off a passing play between @masonmctavish27 and @chis_decs! All tied up again, this time at 2!#GoPetesGo pic.twitter.com/cPN1U52TgZ

Gallant would also score the go-ahead goal for his Petes with 1:38 left in the period after being fed a great pass from Michael Little out of the Petes’ end that found the captain alone in the neutral zone.

O CAPTAIN MY CAPTAIN! A nifty backhand indeed! @mlittle00 finds @zachgally with a heads-up pass and the captain slides the pucks past Costantini! Our first lead of the game, it’s 3-2 Petes!#GoPetesGo | #SJSharks pic.twitter.com/jtlBVFvS3j

Gallant’s ninth and tenth tallies of the season were products of Peterborough’s 22 second period shots to Hamilton’s 6.

Your Petes went to work in the second frame 💪#GoPetesGo pic.twitter.com/X6LrsrY3Gk

Little added his second point of the game 1:40 into the third stanza, capitalizing on a loose puck in front of Costantini to deposit the puck into a wide open Hamilton net. Jacob Paquette and Brady Hinz assisted on what would become Peterborough’s game-winning goal.

A slew of penalties – two to the Bulldogs then four straight to the Petes – meant much of the period was played with nine skaters on the ice.

A late charge against Hamilton resulted in a shorthanded marker for Jenik – his second goal and third point of the game – bringing the Bulldogs within one with 4:22 remaining in the match.

That would be as close as the Bulldogs would get despite pulling Costantini from his crease to add an extra attacker in the dying minutes of the frame.

Gallant, Jenik, and Little were named the game’s first, second, and third stars.

The Petes are back in action on home ice on Thursday, November 21 to host the Kingston Frontenacs at 7:05pm before getting a visit from the Kitchener Rangers on Saturday, November 23 at 7:05pm.