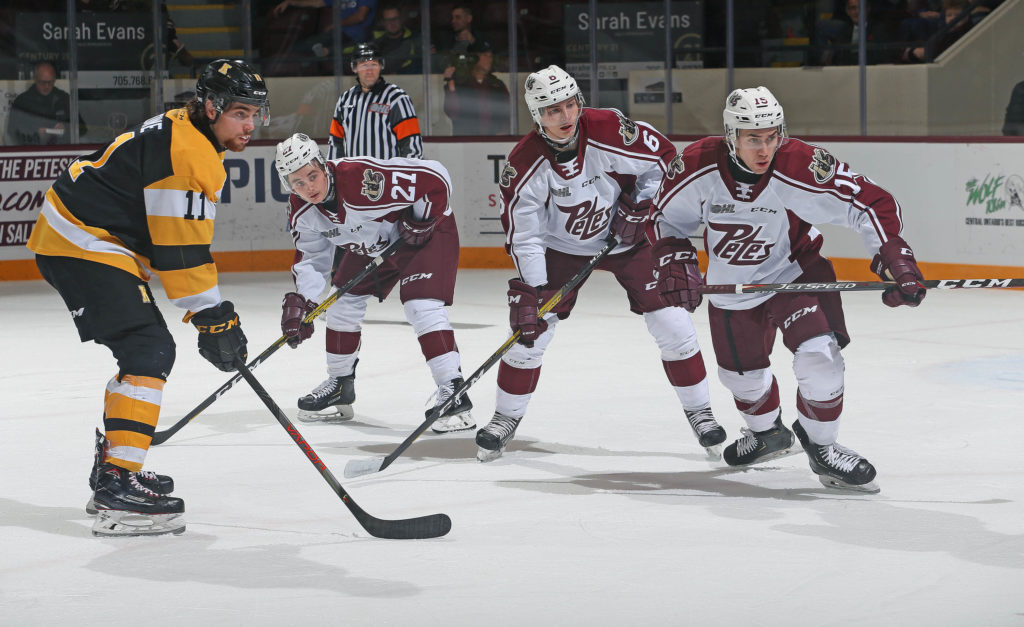 Strong offensive performances from Brady Hinz and Declan Chisholm lifted the Petes over the Frontenacs for the second time this week as the maroon and white skated to a 4-1 win in Kingston on Friday night.

As they were on Tuesday, the Petes were the first on the scoreboard. Just like they’d drawn up in practice, face off specialist Zach Gallant won a clean draw in Kingston’s end and moved the puck to Brady Hinz who was poised for a pass at the top of the circle. Hinz sent a wrist shot past Dugas for his seventh of the season 2:01 into the match.

HINZY! A clean face off win by @zachgally and back to @BradyHinz to beat Dugas! It’s 1-0 Petes!

(We’re having tech issues getting video of the goal – hope to have it soon!)#GoPetesGo

Kingston was sent to their first power play of the night but couldn’t manage a shot on Tye Austin. Some extracurricular activity followed, coupled with a pair of Petes penalties, but the Petes were able to keep Kingston off the board through the end of the first period.

Off to a good start in the Limestone City.#GoPetesGo pic.twitter.com/1zZvbaACc2

A strong start to the second by the Frontenacs resulted in their game tying goal. Much like Peterborough’s opening tally, a face off win by Jordan Frasca was dished to Jakob Brahaney on the point. Brahaney released a point shot that was redirected by Maddox Callens for his first OHL goal 5:16 into the middle frame.

The division rivals exchanged infractions through the mid-way point of the period and that would be all that was called until a go-ahead marker for the maroon and white.

Keegan McMullen registered his third goal in as many games with just 2.2 seconds left to play in the stanza with a no-look shot from just above the goal line after picking up a cycled puck by Hinz, with Declan Chisholm collecting the secondary assist.

MULLEY! @McMulley17 floats the puck past Dugas with 2.2 seconds left in the middle frame to get us back in front! Helpers from @BradyHinz and @chis_decs. 2-1 Petes!#GoPetesGo pic.twitter.com/M5nzAP61kf

Peterborough was still up by a goal after 40 minutes of play.

A pair of third period goals added some insurance for the Lift Lock Lads.

Hinz would put away his second of the game with a backdoor one-timer at 5:59 off a cross-ice feed from Chisholm, with Gallant recording his second assist of the evening. The insurance marker was Hinz’s fourth goal and fifth point against the Frontenacs this week.

Semyon Der-Arguchintsev’s fourth of the campaign was a stellar individual effort after a pass from Chisholm, his third helper of the night.

SAMMY! SDA extends the lead to 4-1 with a laser! Chalk up another apple for @chis_decs!#GoPetesGo | #LeafsForever pic.twitter.com/D7JU4ed6Qb

Final shots were 35-26 in favour of the visiting Petes who were 0/1 on the power play and 4/4 on the penalty kill. Tye Austin turned away 25 of 26 shots in his first win of the season.

Hinz, Austin, and Callens were named the game’s first, second, and third stars.

The win is Peterborough’s tenth on the road this season and improves their record 13-5-0-0.

The Petes return home to host the Ottawa 67’s on Sunday, November 10 at 2:05pm. The team will honour veterans and active military in a special pre-game ceremony, and there will be a free post-game skate for all fans with tickets to the game. Click here to view game details.