Petes Overcome by Spitfires in Windsor 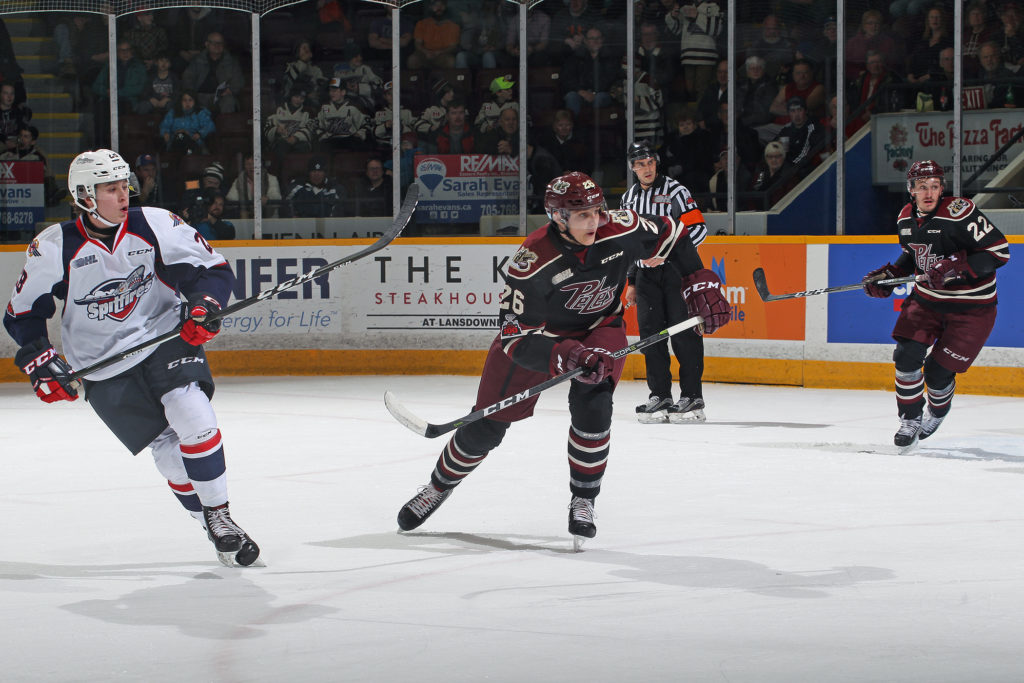 A four point performance from Semyon Der-Arguchintsev and multi-point games from Tucker Robertson, Liam Kirk, Nick Robertson, Declan Chisholm, Cameron Butler, and Mason McTavish weren’t enough to find a win in Windsor on Saturday night, as the Petes fell 9-6 to the Spitfires.

It took a few minutes for the teams to find their feet. The Spitfires were given an early man advantage opportunity before getting into some significant penalty trouble of their own in the middle of the frame.

The first of three consecutive power play tallies from the Petes was Mason McTavish’s first OHL marker. After McTavish and Liam Kirk played give-and-go along the blue line, Semyon Der-Arguchintsev waited for McTavish to get himself into prime real estate before dishing him the puck to send past Kari Piiroinen 11:23 into the game.

TAVY! Patience pays off as SDA waits until @masonmctavish27 gets a clear lane to bury his first #OHL goal on the PP! Second assist to @kirky_1424. 1-0 Petes!#GoPetesGo pic.twitter.com/aIgWytiRx9

Tye Austin, in his first start of his sophomore season, was solid through the remainder of the period to hold up his team’s 1-0 lead.

Shots on net were minimal in the opening frame, with Windsor holding a slight edge despite spending a lot of time on the penalty kill.

The first of many for Mason gives us the lead after 20 minutes!#GoPetesGo pic.twitter.com/dEu979GqRZ

The middle stanza was a wild one with eight goals scored between both teams.

Nick Robertson showed off his signature shot from the top of the far circle just 38 seconds into the period. Declan Chisholm, in his first game back since being returned from the Winnipeg Jets, assisted on the goal, as did Der-Arguchintsev.

Der-Arguchintsev’s helping hands continued to find his teammates, this time connecting with Tucker Robertson for his first assist on Cameron Butler’s first goal of the campaign.

In what looks to become a popular stats line on the score sheet this season, it was Liam Kirk who extended Peterborough’s lead to 4-0. Nick Robertson did some digging down low to move the puck into the corner for Der-Arguchintsev before finding a spinning Kirk in front.

YES KIRKY, REYT GOAL 🇬🇧 @kirky_1424‘s second goal in as many games brings the score to 4-0! SDA and @nickrob2001 combine for the helpers.#GoPetesGo pic.twitter.com/b7XkUk8ZqT

That’s when the Spitfires started their engines.

Four straight goals even strength goals in 6:29 from Wyatt Johnston, Curtis Douglas, Daniel D’Amico, and Tyler Angle tied the game at 4 by 12:13 of the second period.

Tucker Robertson, who earlier in the game got his first point, waited only a few moments to earn his first OHL goal and put his team back in front, with Chisholm and Brady Hinz lending assists.

TUCKS! @Robertson_62 puts away his first #OHL goal to restore the lead! @chis_decs and @BradyHinz assist on the milestone marker. 5-4 Petes!#GoPetesGo pic.twitter.com/gYqVr51GUd

The peculiar period ended as the first did with Peterborough ahead by one goal, but this time holding a slight advantage on the shot clock.

Well, the second period was just a little different from the first 😅

Aside from one Peterborough goal, the final frame was all Spits.

Angle scored on the power play to even up the score before Douglas gave Windsor their first lead of the night.

McTavish would go high glove side on Piiroinen off a lengthy pass from Zach Gallant and Butler to bring the game to a tie for the final time.

Jean-Luc Foudy followed up with back-to-back buries, the second into an empty net, before Luke Boka pounced on a late rebound with 4.5 seconds left to firm up the 9-6 victory for the Spitfires.

The Petes have a lengthy break before their next game that sees them visit the Ottawa 67’s in the Nation’s Capital on Sunday, September 29 at 2:05pm.

A Petes Fan Bus will travel to the game, and you could be on it! For just $60, or $50 for Petes Season Ticket Members, you’ll receive round-trip transportation, a game ticket, snacks, and Petes merch. Call Julia at 705-977-0127 or click here to register.

alumni
The challenges, rewards, and misunderstandings of scouting: Matt St. Germain
3 hours ago