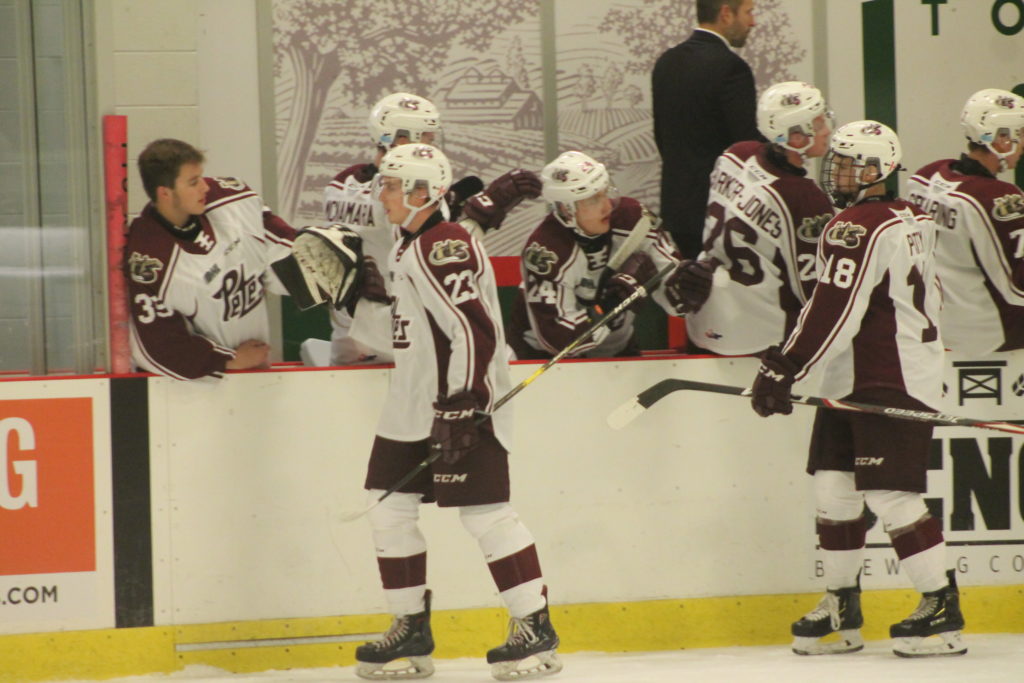 As they’d done in two of three pre-season games so far, the Peterborough Petes came back from an early 2-0 deficit to win on the road, securing a 6-5 shootout win in Beamsville on Friday night.

Play continued to the halfway mark of the period before the Petes were assessed a lengthy five minute major, seeing Michael Little removed from action. 2:20 into their first power play of the game, Niagara extended their lead to two goals as their leading pre-season scorer, Jonah De Simone, found the back of the net. Lucas Theriault and Mason Howard assisted on the marker.

The Maroon and White weren’t down for long before getting themselves back in the game. After an offensive training camp, Dustin Hutton found his first exhibition tally by backhanding a rebound past Josh Rosenzweig, with J.R. Avon picking up an assist.

Avon notched one of his own just under four minutes later, with his club on the man-advantage, to bring the game to it’s first tie, 2-2. Hutton and rookie rearguard Josh Kavanagh assisted on the Peterborough native’s second pre-season goal.

J.R.!! @Avonjr_1010 nets his second of the pre-season with a powerful wrist shot on the PP! Helpers from @dustinhutton61 and @joshkavanagh14 to tie this game at 2!#GoPetesGo pic.twitter.com/FCs74JncOm

Shots were nearly even with Peterborough holding strong in the face off circle and in special team performance after the first frame.

2⃣ for them, then 2⃣ for us. All even after 20 minutes!#GoPetesGo pic.twitter.com/nA6q3jMnXN

Momentum continued in Peterborough’s favour, leading to the visitors taking their first lead of the game. Fifth overall pick Mason McTavish showed off what is sure to become his trademark shot to send Rosenzweig’s water bottle flying at 4:24 in the middle stanza while an IceDog sat in the penalty box. Import Pete David Maier combined with Cameron Butler to assist on McTavish’s second of the early season.

TAVY! @masonmctavish27 pops the @GatoradeCanada bottle off of Niagara’s net to give the Maroon and White their first lead of the game! @david_maier17 and @CButler_21 lend assists on the power play marker. 3-2 Petes!#GoPetesGo pic.twitter.com/kmhZ4ytdxG

The lead was short lived, though, as Dakota Betts knotted the game at 3 by sending a bomb from the point behind Austin 2:27 later. Niagara’s second power play goal of the night was assisted by Giancarlo Chanton and Andrew Bruder.

Shortly after the midway mark of the period, Butler nearly brought the Petes back in front, but instead De Simone, who leads the IceDogs in scoring, restored the lead for his team. Aj Cook and Johnson registered helpers.

As was the trend in this one, the game was once again brought back to a tie, this time by the hands of Butler. The draft-eligible right winger deposited the puck behind Rosenzweig off a rebound created by Hutton and McTavish with 4:25 remaining in the second.

The Petes continued to dominate in face off wins, with special teams getting the job done in the middle frame.

It took 8:02, but the Petes once again got themselves ahead on the scoreboard. Recently committed right-wing rookie Tucker Robertson netted his first, bringing the score to 5-4 for the Lift Lock Lads. John Parker-Jones and Kavanagh connected on the goal’s assists.

ROBBIE! @Robertson_62 gets his first as a Pete to bring the boys back in front! 5-4 Petes, with @ParkerJones777 and @joshkavanagh14 assisting.#GoPetesGo pic.twitter.com/ijI75XtfSr

Much to the delight of the Lincoln Minor Hockey crowd, the IceDogs once again evened up the score. Kyen Sopa, who had been buzzing in front of Austin for a few moments, buried the puck from in close with 5:48 left in the third period with help from Oliver Castleman and Rosenzweig.

60 minutes wasn’t enough to solve this one, so the Conference rivals headed to a shootout.

Peterborough’s fifth shooter, Parker-Jones, made an impressive move around Rosenzweig to seal the Petes win, with Butler also scoring in the shootout. Agostinelli was the only IceDog to beat Austin in one-on-one action.

The Petes Pre-Season presented by CIBC Wood Gundy Peterborough wraps up with the Petes’ only ‘home’ game on Saturday, September 14 in Millbrook at the new Cavan Monaghan Community Centre at 7:05pm. Although the game is sold out, fans will be able to watch a live stream of the game. Stayed tuned to our social media channels to learn how to follow Saturday’s game!