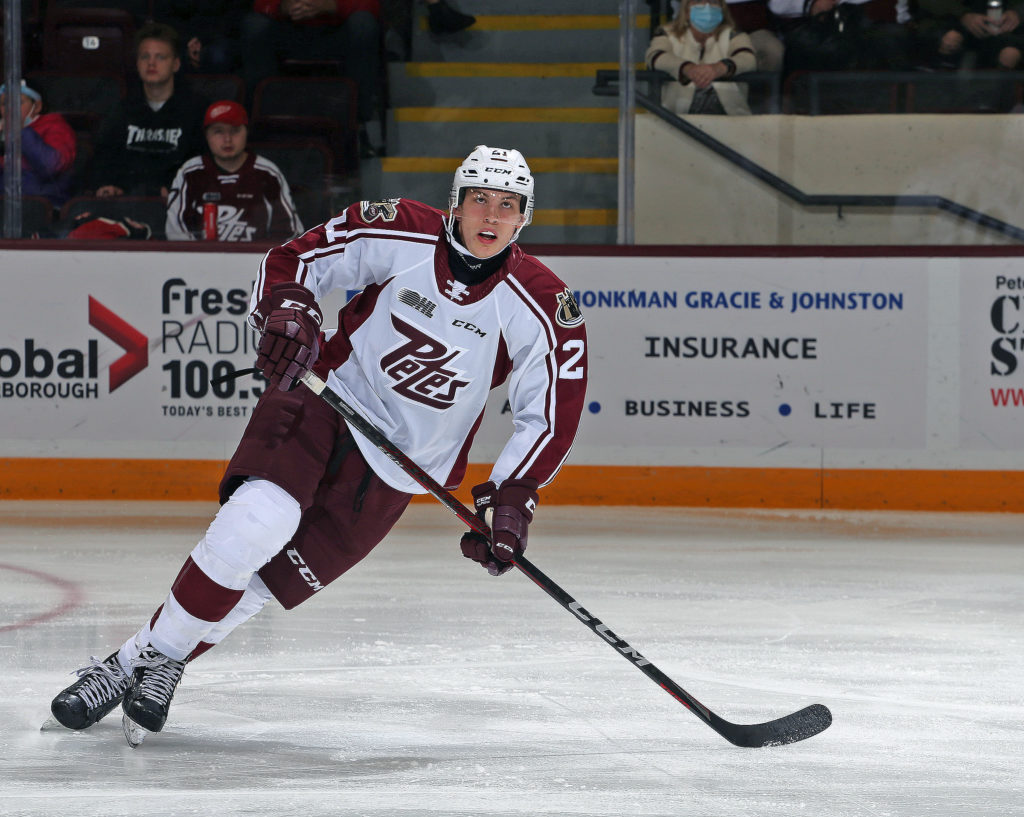 The Peterborough Petes picked up their first road victory of the season Saturday night at the Meridian Centre in St. Catharines. Michael Simpson made 33 saves on a night that saw OHL firsts from Zack Lewis, Jaden Reyers, Ryan Gagner, Donovan McCoy, and Sam Alfano.

The Petes got on the board early as Reyers carried the puck behind the IceDogs’ net and found Lewis out in the slot. Lewis’ one-timer beat IceDogs goalie Tucker Tynan five-hole giving the Petes a 1-0 lead Lewis his first OHL goal and point. Assists on the goal went to Konnor Smith and Reyers, the first point in his OHL career.

.@ZackLewis23 beats Tynan five-hole for his first-career OHL goal! @ksmitty91 and Jaden Reyers pick up the helpers on the game's opening goal!#GoPetesGo pic.twitter.com/H9RLsy2bYQ

It didn’t take long for the Petes to extend their lead. Just 23 seconds later, Emmett Sproule skated through centre ice, collecting a pass from Ryan Gagner at the blue line. Using his speed, Sproule split through the IceDogs defence and slid the puck through Tynan’s pads to give the Petes a 2-0 lead. Petes rookie Gagner picked up his first career OHL point on the play. Sproule extended his point streak to nine games.

Sproule extends his point streak to nine games after scoring his 5th of the season! Ryan Gagner picks up his first career OHL point and Reyers picks up his second assist of the night!#GoPetesGo pic.twitter.com/Y62eAsbYBL

The IceDogs responded with a goal of their own. With Shawn Spearing in the box for slashing, San Jose Sharks prosect Danil Gushchin fired a shot from the top of the left faceoff circle. Michael Simpson made the blocker save, but Brice Cooke pounced on the rebound to bring the IceDogs within one heading into the second.

The second period would be dominated by special teams. The Petes managed to kill three consecutive penalties, including a 5-on-3. After an onslaught of IceDogs pressure in the Petes’ end, an exhausted Tucker Robertson put his body on the line and blocked a Rodwin Dionicio point shot. The puck bounced off of Robertson’s shin pad and into the neutral zone where Dionicio and Robertson took off in a foot race. Robertson collected the puck, and with a desperate Dionicio draped over his back, was able to put the puck in the back of the net, extending the Petes lead to 3-1.

Robertson wasn’t done yet. With former Pete Cameron Butler taking a seat for slashing, Flyers prospect J.R. Avon fired a wrist shot from the right circle that ricocheted off the post and onto the blade of Tucker Robertson who made no mistake in burying his second of the game and sixth of the season to put the Petes up 4-1 going into the second intermission. Sproule picked up the secondary assist on the goal.

Tucker banks the puck in on the doorstep for his second tally of the night! @NHLFlyers prospect @Avonjr_1010 and @Emmett9393 pick up the assists!#GoPetesGo pic.twitter.com/bZGIOgu4yK

The third period began with the same fast pace that had driven the first two periods. Just over four minutes into the final frame, Petes alternate captain Keegan McMullen scored his second goal of the season by burying the rebound of a redirected point shot to extend the Petes lead to 5-1. Assists went to Sam Alfano and Donovan McCoy who picks up his first career OHL assist!

.@McMulley17 buries the rebound for his second goal of the year! Assists go to Sam Alfano and @Donovan_9321, who picks up his first career OHL assist!#GoPetesGo pic.twitter.com/DUqdplwf8p

The IceDogs weren’t going to go away silently. Led by a couple of goals by former Pete Cameron Butler, Niagara brought themselves within one, but it was too little too late. The Petes were able to hold on to win 5-4.

THREE STARS OF THE GAME:

The Petes are back in action Thursday, November 4 at 7:05 pm against the North Bay Battalion for our annual remembrance day game.