Petes Pick Up First Win of the Preseason Against Sarnia Sting 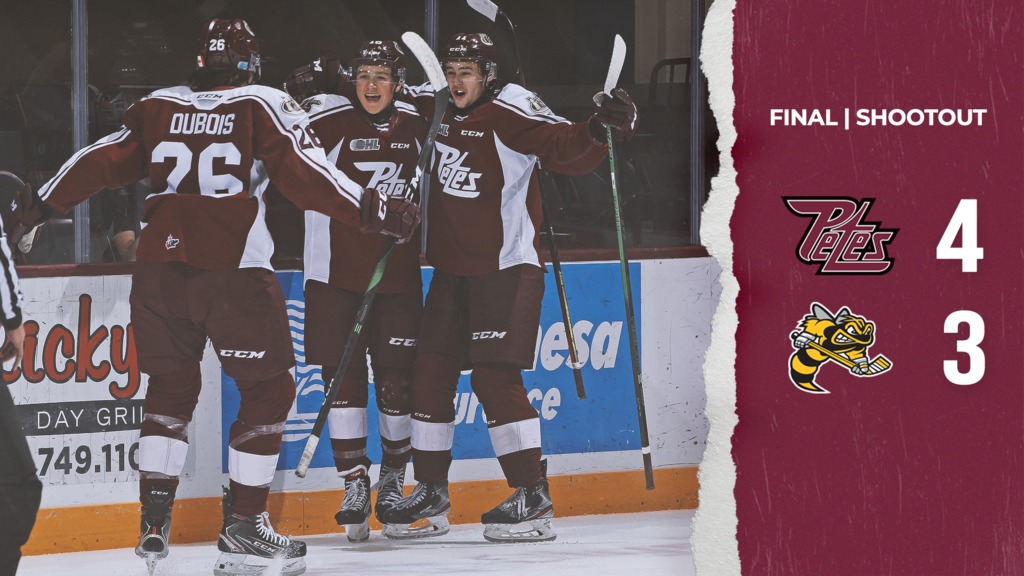 The Peterborough Petes capped their preseason at home with a 4-3 shootout win against the Western Conference Sarnia Sting on Thursday, September 23. Forwards Kaspars Ziemins and Nick Lardis, and defenceman Samuel Mayer scored their first goals of the 2021 preseason, but it was ultimately Jax Dubois who sealed the deal in a shootout.

Hitting the scoreboard first in the opening frame was 2021 sixth overall pick Lardis, who converted a pass from Ottawa native Jax Dubois at 8:40 in the game.

Jax Dubois with the dish, @NickLardis91 with the finish 🚨

Following up for the Lift Lock Lads was the Petes’ 2020 CHL Import Selection, Kaspars Ziemins. The Latvian forward netted the Petes second goal, following a pass from Kallaway Mercer at 13:49.

Ashton Reesor of the Sting brought Sarnia within one goal of a tie at 18:22, putting a puck past the pads of tonight’s starter, Michael Simpson. Both teams generated tons of opportunities before the period expired, but Petes led the way 2-1 after 20.

The Sting got one on the board before the period expired to cut our lead to one.#GoPetesGo | #GameON pic.twitter.com/rRq4zjOcip

Things started to heat up in the second period as both teams brought a physical presence to the ice. Two minutes into the second, Sting’s Nolan Dillingham tied up the game with a power play goal. Fortunately for the Petes, the tie didn’t last long, as defenceman Mayer tapped an unassisted puck into the back of Sarnia’s net, giving the Petes a one goal lead.

The remainder of the period saw both the home a visiting team spend some substantial time in the penalty boxes. Petes Defenceman Artem Guryev would see time in the sin bin at 5:16 for unsportsmanlike conduct and the Sting’s Nolan Degurse would follow up with a hooking penalty at 10:12. A pair of penalties were delivered at 11:00 on the dot, to Angus MacDonnell and Justin DeZoete for roughing.

The second period would end with the Petes ahead by a single goal.

Both teams came out and generated tons of opportunity in the third, with the home’s and visiting goal posts getting hit several times. It wasn’t until the five minute mark when Ben Lalkin’s shot beat Simpson to tie the game.

Both teams continued to fire pucks on the net but both netminders stood tall to keep it a 3-3 game. Followed by a big hit, the Sting gained momentum in the final minutes and seconds of the period, but Simpson stood tall and players continued to block shots.

The final buzzer ended this game heading into a shootout. The shootout appeared in this order:

The Petes went on to win their first game of the preseason. Finals shots were 37-32 in favour of Peterborough. Ziemins, Mayer and Sting’s Dillingham were named the game’s first, second, and third stars.

The Petes will seek revenge against Shane Wright and the rest of the Frontenacs on Saturday, September 25 at 7:00 pm at the Leon’s Centre.