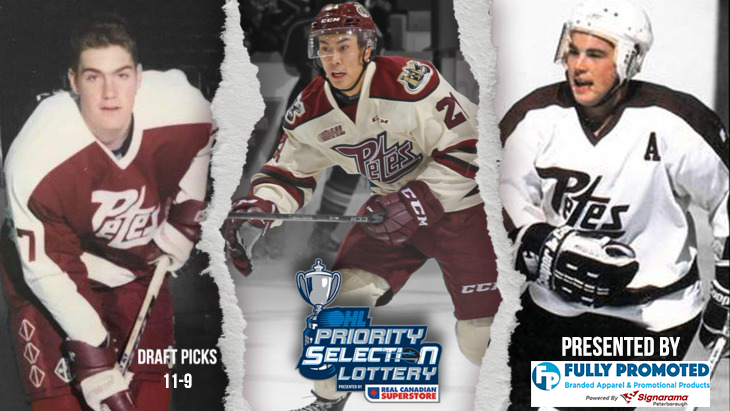 Next week’s 2021 OHL Draft Lottery Presented Locally by Fully Promoted Peterborough, will determine the order of the 2021 Priority Selection. The first first-ever draft lottery will be held on Wednesday, May 5 at 7:00 pm. Fans will be able to catch a livestream of the Lottery on the OHL YouTube channel.

John Beukeboom was selected by the Petes 11th overall in the 1978 OJHL Priority Selection. During his time playing at the Memorial Centre, the Petes defenceman won a J. Ross Robertson Cup in 1979 and 1980, and won a national championship in 1979. Following his time with the Petes Boomer played 6 years professionally in the AHL, CHL, and IHL.

Uxbridge native, Jordan Morrison was drafted to the Petes 11th overall in the 2002 OHL Priority Selection. The left-handed forward played with the Petes for four seasons and was a member of the 2006 J. Ross Robertson Cup championship team. In 303 games as a Pete, Morrison amassed 228 points and was drafted by the Pittsburgh Penguins in 2004. The Petes alumnus played two seasons with the Dalhousie Tigers before joining the ECHL’s Texas Wildcatters in 2008. In 2014 he won the Kelly Cup with the Alaska Aces.

J.R. Avon was selected by his hometown team 11th overall in the 2019 OHL Priority Selection. In his rookie season with the Petes, Avon put up 11 points, and played for Team Canada White at the 2020 World U17 Challenge. Although Petes fans have only seen one season from Avon so far, his quick puck movement and on-ice shiftiness is leaving fans excited for his potential.

Another hometown Pete, Joe Hawley was selected by the maroon and white in 1987. Hawley spent his entire junior career with the Petes and most notably tallied 139 assists across four OHL seasons. The centreman was part of the team alongside guys like Jassen Cullimore and Rob Wilson who won the OHL championship in 1989. He was drafted to the St. Louis Blues in the 1990 NHL and split his professional playing career between the IHL, ECHL and CoHL.

Throughout Petes history, only one player has been selected 10th overall: Randy Johnston. Born in Brampton, Ontario, the Petes defenceman was picked up by the Petes in the 1975 OJHL Entry Draft. Johnston spent two seasons donning maroon and white, where earned a J. Ross Robertson Cup and made it to the finals of the 1978 Memorial Cup. He was drafted by the New York Islanders in the 1978 NHL Amateur Draft.

Dave Roche was picked 9th overall by this hometown team in the 1991 OHL Entry Draft. A product of Peterborough minor hockey, Roche spent 2.5 seasons with the Petes. The 6 ft. defenceman won a J. Ross Robertson Cup in 1993, the same year he was drafted by the Pittsburgh Penguins. The Peterborough native played in 187 NHL games with the Penguins, Calgary Flames and New York Islanders.

Hailing from the Petes rivalry city Oshawa, Barney arrived after being drafted to 9th overall. The right winger played four years with the Petes from 1995-99, earned an OHL championship with the 1996 crew, and captained the team during the 1999 season. In 277 games as a Pete, Barney picked up 268 points, and was drafted to the LA Kings in 1977. Following a 15-year long pro career, Barney entered the world of coaching and now serves as the Head Coach and General Manager of the Humboldt Broncos.

Assistant Coach of the Sault St. Marie Greyhounds, Jamie Tardif was drafted 9th overall by the Petes in the 2001 OHL Entry Draft. The Welland, Ontario native played for the Petes from 2001-2006 and rocked the “C” on his jersey during his graduating season. Following his time with the Petes, Tardif played in 514 AHL games and was a captain with the Grand Rapids Griffins from 2009-11. In 2015, he won the DEL championship with the Mannheim Eagles.

The Petes’ most recent 9th overall pick was forward Jonathan Ang. Hailing from Markham, Ontario, Ang spent 3.5 years in Lift Lock City and recorded 192 points. Known for his incredible edgework and smooth puck handling, the Petes forward was selected by the Florida Panthers in the 4th round of the 2016 NHL Entry Draft. The majority of his professional playing career thus far has been spent with the Panthers’ affiliate team, the Springfield Thunderbirds. Throughout the 2020-21 season, Ang played in the Swiss National League.

alumni NHL
Petes in the Playoffs: An NHL postseason primer for fans of the maroon and white
9 hours ago

alumni OHL
From the Patch to the Island: John Brioux
3 days ago