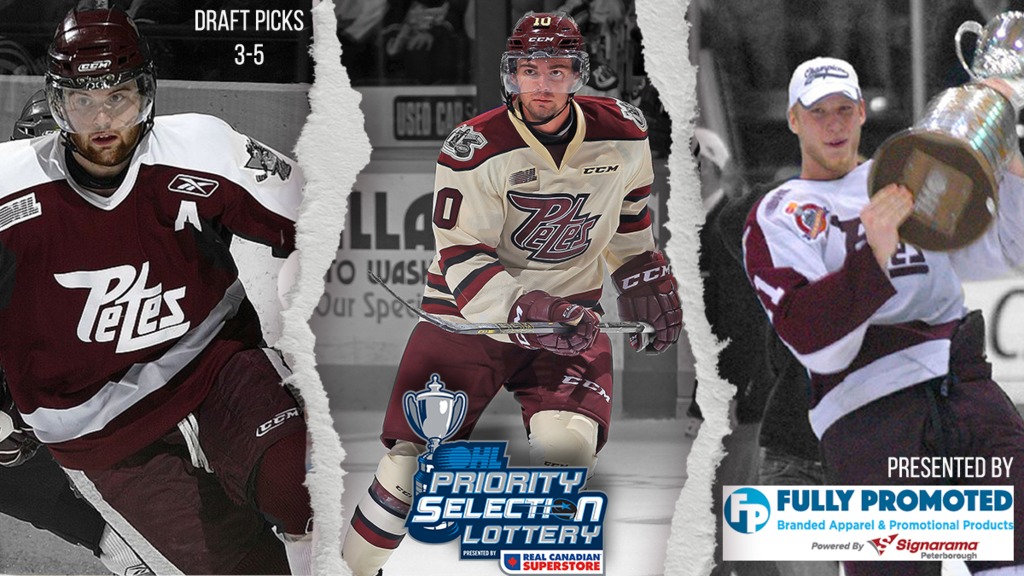 Wednesday’s OHL Draft Lottery Presented Locally by Fully Promoted Peterborough, will determine the order of the 2021 Priority Selection and fans can watch history unfold by tuning into the Petes Draft Lottery Show at 6:25 pm on the Petes Facebook page. The pre-draft show hosted by Your TV’s Dan Malta, Fresh 100.5’s Pete Dalliday, and Global News’ Meaghan Roy will feature interviews with special guests ahead of the draft lottery from 6:25 pm until 7:00 pm and include an in-depth analysis of the Petes past first round picks, as the OHL draft unfolds live from 7:00 pm – 7:30 pm.

The 5th overall draft pick for the Petes has provided the team some of its top talent in recent history. Ottawa, Ontario native Ryan Spooner was selected by the Petes in the 2008 OHL Priority Selection. The left-handed forward played 2.5 seasons with the Petes and tallied 131 points in 123 games. Following his time in the OHL, Spooner split his time from 2012 to 2018 between the Boston Bruins and their AHL affiliate team, Providence Bruins. He spent the last two seasons playing for the Dinamo Minsk of the KHL.

Former captain of the Petes, Zach Gallant was drafted from the U16 Mississauga Rebels, 5th overall in the 2015 OHL Priority Selection. The London, Ontario native made his mark in the OHL for producing some of the best faceoff statistics in the league’s history. Gallant was voted “Best in Face-offs” in the 2019-20 Coaches Poll and finished in the top-three of that category for four of his five OHL seasons – an accomplishment almost unimaginable in any Coaches Poll category. In fact, no other player has ever been named in this category for four consecutive seasons, since the OHL started tracking face-offs in the 2015-16 season. Gallant captained the Petes from 2018-20, and has spent the 2021 season playing for the AHL’s San Jose Barracuda.

Drafted 5th overall by the Petes at the 2019 OHL Priority Selection, Mason McTavish impressed fans in his opening OHL season with a 42-point production, placing him second in scoring among League rookies. His 29 goals also placed him third among his teammates and are the most by a Petes rookie since Matt Puempel (33) in 2009-10. The Pembroke Lumber King alumnus is currently representing Canada at the U18 IIHF World Championships.

Detroit Red Wings General Manager and Hockey Hall of Famer Steve Yzerman was selected by the Petes 4th overall in the 1981 OHL Entry Draft, from the Nepean Raiders. Stevie Y donned the maroon and white for a pair of seasons before being drafted to the Motor City in 1983 (4th overall again). Yzerman captained the Red Wings across 19 seasons, winning a Stanley Cup with them in 1997, 1998, and 2002- the same year he won an Olympic gold medal with Hockey Canada. The Petes alumnus has been the recipient of the Ted Lindsay Award, Conn Smythe Trophy, Frank J. Selke Trophy, and Bill Masterson Award, and was inducted into the Hockey Hall of Fame in 2014. Today he serves as the General Manager for the Detroit Red Wings.

Edmonton Oilers’ Zack Kassian was drafted to the Peterborough Petes in the 2007 OHL Priority Selection from the Windsor Jr. Spitfires. Kass played for the Petes for 2.5 seasons, and rocked a ‘C’ on his jersey across 33 games. His NHL career has spanned a decade, and in 577 games he has put up 185 points (and counting).

Kevin Bolibruck was drafted to the Petes 3rd overall in the 1994 OHL Draft. The Thorold Blackhawks alumnus played for the Petes over three seasons and was the captain of the maroon and white in his final year. The defenceman was a member of the ‘96 squad that won the OHL championship and saw the Memorial Cup hosted in Peterborough.

One of the greatest Petes of all time, Jordan Staal, was drafted to the Petes 3rd overall in the 2004 OHL Entry Draft from the Thunder Bay Kings. Staal played for the maroon and white for a pair of seasons, earning a J. Ross Robertson Cup in his second year. Across 171 games as a Pete, Staal tallied 126 points. The Thunder Bay native was drafted 2nd overall in the 2006 NHL Entry Draft by the Pittsburgh Penguins where he hoisted the Stanley Cup. He has spent the last 15 years playing in the NHL between the Pens and Carolina Hurricanes. Renowned for his leadership, Staal has worn a letter on his jersey since 2008.

Eric Cornel was selected by the Petes 3rd overall in the 2012 OHL Priority Selection from the U16 Upper Canada Cyclones. Cornel played for the Petes for four seasons, and was the captain his veteran year. In 288 OHL games, the Kemptville native recorded 226 points. In 2014 he was drafted by the Buffalo Sabres 44th overall, and played with the Nuremberg Ice Tigers during the 2020-21 season.

Matt Spencer was drafted to the Petes from the U16 Oakville Rangers, 3rd overall in 2013 OHL Priority Selection. The right handed defenceman played for the Petes from 2013 until 2017 and rocked an ‘A’ on his jersey, his final two years. In 2015 he was drafted to NHL’s Tampa Bay Lightning and has spent his last three seasons with the ECHL’s Orlando Solar Bears.