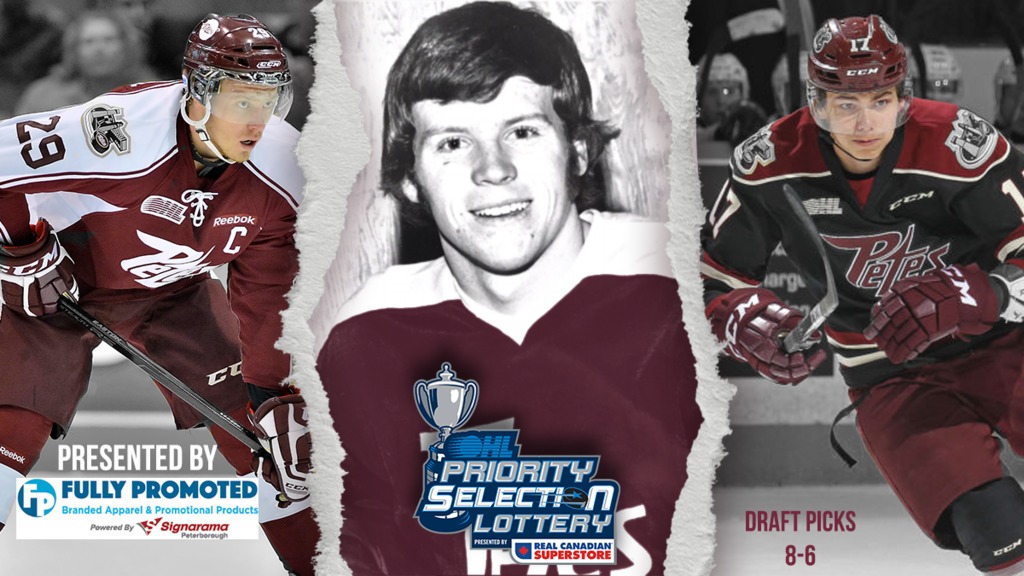 Next week’s 2021 OHL Draft Lottery Presented Locally by Fully Promoted Peterborough, will determine the order of the 2021 Priority Selection. The first first-ever draft lottery will be held on Wednesday, May 5 at 7:00 pm. Fans will be able to catch a livestream of the Lottery on the OHL YouTube channel.

Danny Gloor was selected by the Petes in the 1969 OHA draft from the Stratford Whalers. The centreman played for the Petes from 1969-72. In his final season donning maroon and white, Gloor earned an OHA championship alongside the likes of guys like Ron Lalonde and Paul McIntosh, and was selected by the Vancouver Canucks in the NHL Entry Draft. In 226 games as a Pete, Gloor put up 226 points.

OHL scoring machine Pavel Gogolev was picked up 8th overall by the Petes in the 2016 OHL Priority Selection. The Russian left wing played 2.5 seasons with the Petes and scored 30 during his sophomore season.

Winchester defenceman Slater Koekoek was selected by the Petes in the 2010 OHL Priority Selection. The 27-year-old Edmonton Oiler spent three seasons with the Petes and recorded 55 assists. He was drafted 10th overall to the Tampa Bay Lightning in the 2012 NHL Entry Draft. Koekoek split his time between the Syracuse Crunch Lighting for five years before joining the Chicago BlackHawks for a pair of seasons.

The NHL Ironman leader was drafted to the Petes in 1972 from the Brantford Legionnaires. Renowned for his strong leadership skills, Jarvis captained the Petes from 1973-75, in addition to holding the title of captain at the 1974 World Junior Championship. The centreman was drafted to the Toronto Maple Leafs in 1975 but ended up playing for the Montreal Canadiens throughout his rookie season and for the six seasons proceeding. Throughout his 12 seasons in the NHL, Jarvis acquired four Stanley Cups, a Frank J. Selke Trophy, and a Bill Masterton Trophy in 1987. Following his professional playing career, Jarvis spent the next 25 years in the NHL serving as an Assistant Coach.

Mark Reeds was drafted to the Petes in the 1977 OJHL draft, 6th overall from the Markham Waxers. Reeds saw a J. Ross Robertson Cup each season he played for the Petes and was a member of the 1979 roster that won the Petes’ lone Memorial Cup. Across 234 games as a Pete, Reeds collected 202 points. The Petes forward was drafted by the St. Louis Blues in the 1979 NHL Entry Draft and played eight seasons in the NHL between the Blues and Hartford Whalers. Reeds went on to coach professionally for 23 years before passing away in 2015.

Essex, Ontario native Matt Puempel was drafted to the Petes 6th overall in the 2009 OHL Priority Selection. Across his rookie and sophomore seasons with the Petes, Puempel put up over 60 points and captained the 2012 team for half the season. The Petes alumnus was drafted to the Ottawa Senators in 2011 and spent seven years splitting his time between the nation’s capital and their affiliate, the Binghamton Senators. This past season Puempel played for the Malmo Redhawks of the Swedish Hockey League.