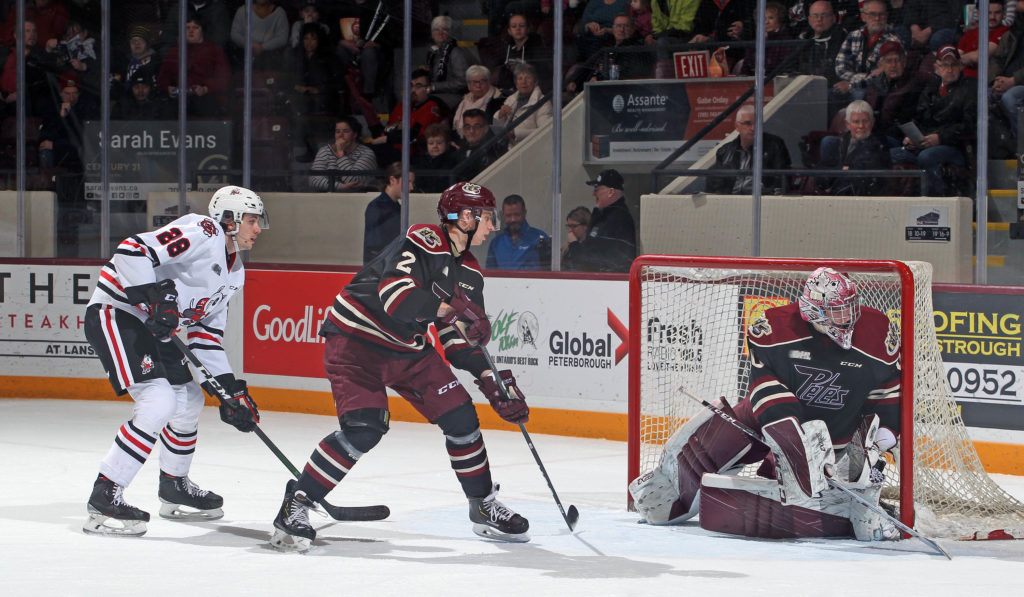 The Petes wrapped up their season series against the IceDogs with a dominant 12-1 win in St. Catharines on Sunday afternoon, for their fourth straight win and finishing with a 4-0 record against the Niagara club.

Semyon Der-Arguchintsev extended his goal scoring streak to three games to break open scoring for the Maroon and White just 1:12 into the game.

SEM! Goals in 3⃣ straight for @semder009 as the @MapleLeafs prospect skates the puck into the slot after a clean face off win by @GrondinMax! 1-0 Petes!#GoPetesGo | #LeafsForever pic.twitter.com/y6kP6P3t3b

Nearly 15 minutes, and multiple penalties for each team, passed before the game’s next goal. Akil Thomas, in what was his first and potentially last visit to the Meridian Centre, would double Peterborough’s lead to 2-0 on the man advantage.

Nick Robertson followed up with his 54th of the season while the Petes were shorthanded, just over a minute after Thomas’ tally.

On the same penalty kill, the Petes gave up what would be their first and only goal of game. Former Pete Adrien Beraldo started the play with a pass to Andrew Bruder who with a nifty spinning pass found Jonah De Simone to get the puck past Tye Austin.

The Petes would close out the period with a man advantage marker courtesy of Brady Hinz.

A fantastic first frame by the Lift Lock Lads in the face off circle surely contributed to their three goal lead after 20 minutes.

It took 5:14 into the second period for the Petes to get their fifth of the game, this time off the stick of captain Zach Gallant.

Der-Arguchintsev and Thomas added their second goals of the day less than a minute apart, bring Peterborough’s lead to 7-1.

KILLER! @AkilThomas2 is putting on a show in his former barn, adding his 2nd goal and 5th point of the game! @kirky_1424 and @zachgally collect the apples. 7-1 Petes!#GoPetesGo | #GoKingsGo pic.twitter.com/TQotw6fJEN

It took the Petes 3:30 to solve the new netminder, with Declan Chisholm getting in on the goal scoring action.

A few minutes of fisticuffs derailed play for a few moments, but that didn’t stop the Maroon and White from further extending their lead as John Parker-Jones added his 8th of the year to wrap up the second period with a 9-1 lead.

A three goal third from the Electric City Kids saw Gallant’s second of the game and Max Grondin getting on the board before Robertson added another shorthanded marker for his 55th.

Finals shots were 54-27 in favour of the Petes. Thomas and Jacob Paquette, both former IceDogs, were named the game’s first and second stars, while Austin received third star honours with 26 saves.

The Peterborough Petes are back in action on Thursday, March 12 when they host the Sudbury Wolves and on Saturday, March 14 to face the Oshawa Generals for Alumni Homecoming Weekend.