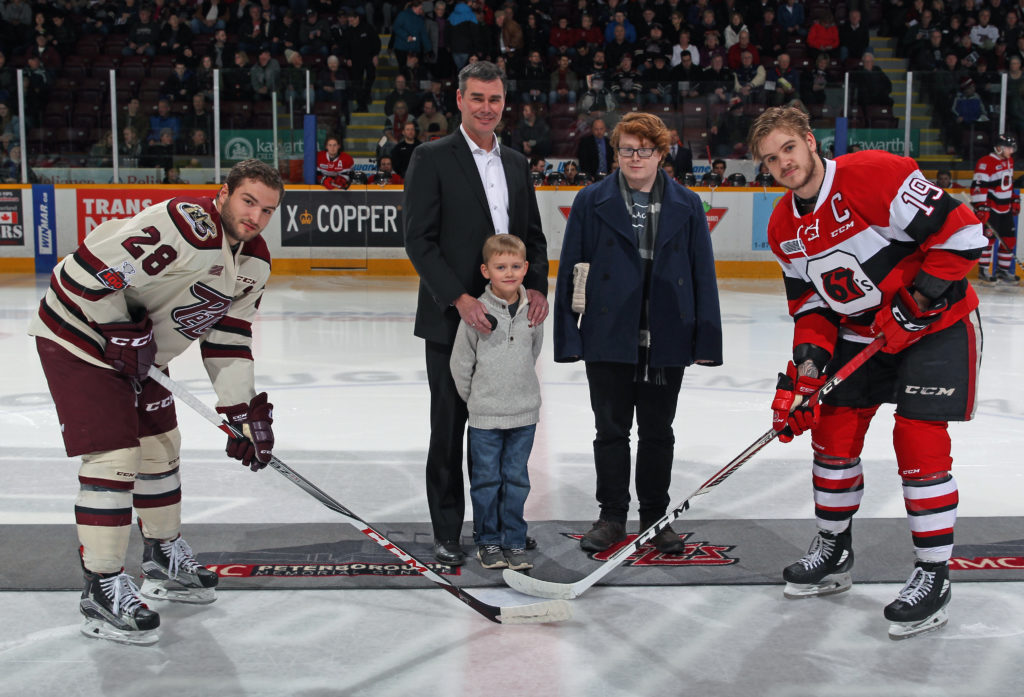 On December 14 before puck drop against the Ottawa 67’s, the Petes recognized the Kawartha Sexual Assault Center (KSAC) and the work they have done in collaboration with the Petes and the Ontario Hockey League (OHL) to combat violence against women. The KSAC is a not-for-profit organization dedicated to supporting those affected by sexual violence. The Peterborough Centre offers individual counselling, group counselling and workshops, peer supports, public education and professional training.

During the 2014-15 season, the Petes became the first OHL team to implement sensitivity training for the entire roster of young men, with intentions to disrupt the toxic culture permitting harassment towards women.

After recognizing the Petes’ effort to resolve sexual abuse, the Ontario Hockey League, in partnership with the Ontario Coalition of Rape Crisis Centres (OCRCC), launched the OHL ONSIDE initiative. The program seeks to bring attention to the requirement of respecting women through their language and actions. According to Petes General Manager Mike Oke, “The idea is to explain and clearly illustrate to our players how the words young men use, impact young women and make them feel.”

Thanks to the Kawartha Sexual Assault Centre for joining us at tonight’s game and promoting the groundbreaking #OHLOnside program! #ptbo

The two hour work shop takes place annually with each team, and requires that the players are active participants throughout the conversation.

“It’s a different way you may not think of it before,” he noted. “If you were to say something around the guys you may not think about it, but when you repeat it to a girl, you recognize how offensive it is and who its hurting. It changes your perspective on things, it reinforces respecting women.”

Lisa Clarke of the Kawartha Sexual Assault Centre aided in the program’s development.

“OHL Onside was a program that was developed, inspired, and lead with the Peterborough Petes and the Kawartha Sexual Assault Centre and the Assault Centre Waterloo Region,” commented Clarke. “The second year we started working with the Petes it was a response to some learning needs that the players had. What its evolved to, is a strong understanding of the leadership required, with the understanding of what is violence against women, [and] what does this have to do with hockey and athletics. Where we begin that conversation is talking about what is going on in the world about society and culture.”

She continued on, by detailing how a session put on for the players unfolds.

“We start the process in an activity called the man box; we start looking at all the words we use to describe a man. You know a man is ‘strong, courageous, can’t show emotion, a man never cries,’ type of things. That prompts conversation about gender and how the words we use to put boys back in the box are degrading to the LGBTQ+ and women. We start to ask questions like what are these, why do we do this. Then we take them to what is harm, and ask them what could be harmful, and we take them into a conversation about respecting women, respecting each other, respecting your teammates, respecting people out in the community and really understanding what consent is.”

The world of sport is not secluded from sex- or gender-based violence, but organizations like the Petes and other OHL clubs are making an effort to interrupt a culture of disparaging language and violent actions that serve as foundations for larger issues. Although sexual violence is pervasive throughout society, hopefully the recognition of the weight of their words and behaviour can be transferred by the players beyond the league and into future spheres as leaders and educators.