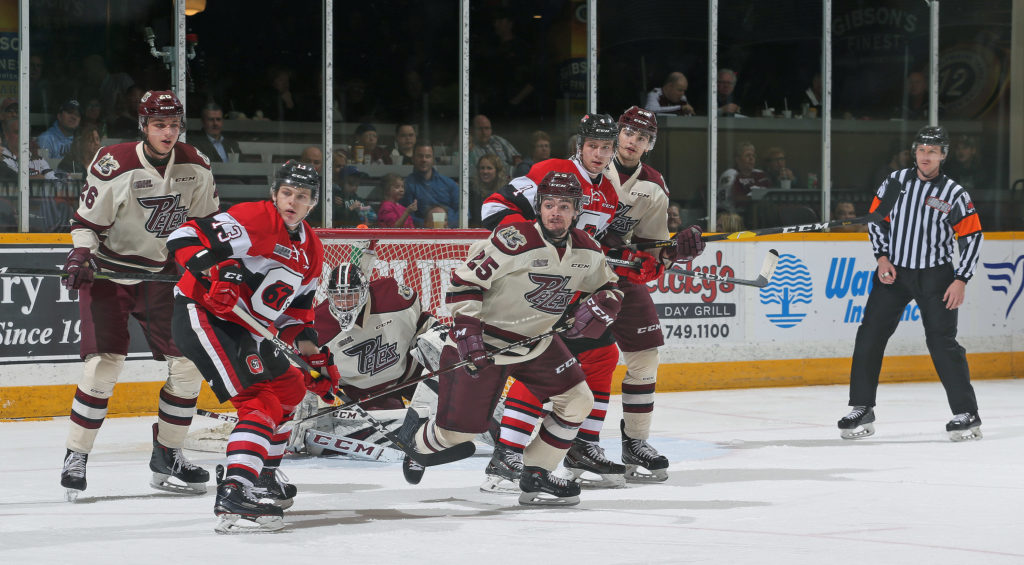 Following a matchup in Guelph on Friday, the Petes wrapped up the pre-holiday game schedule with a tilt against the OHL’s top team – East Division rival 67’s – on Sunday afternoon.

The Petes topped their rivals in a rough-and-tumble tilt, which featured a three-assist night by Ryan Merkley, who was acquired in a trade with the Guelph Storm earlier this weekend.

The first fifteen minutes were timid at both ends of the rink, but the game would be anything but scoreless. With six minutes remaining in the first period, Liam Kirk forced a turnover deep in the Ottawa zone and beat Peterborough Minor Hockey product Will Cranley on the blocker side to open the scoring.

YES LAD, REYT GOAL 🇬🇧! @kirky_1424 forces a turnover in the circle and buries the loose puck for his 10th of the season! 1-0 Petes!#GoPetesGo pic.twitter.com/NeZ4woxOEb

At 1:45 the Petes increased their lead by a single goal as Nick Robertson finished a play from Merkley (his first point as a Pete) and Adam Timleck, giving the mighty maroon and white a 2-0 lead.

ROBBY! Ottawa gets charged with too many men and @nickrob2001 takes advantage on the PP! @ryan_merkley picks up his first point as a Pete with an assist, and @AdamTimleck gets one, too! 2-0 Petes!#GoPetesGo pic.twitter.com/11tXxzlkIe

Only seconds before the buzzer sounded on the first 20 minutes, the score moved to 3-0 Peterborough courtesy of Adam Timleck, assisted by Max Grondin and John Parker-Jones.

TIMMER TIME! @GrondinMax gets the puck past Cranley and @AdamTimleck bangs it home for #11 on the season! @ParkerJones777 records his first point of the season with an assist. 3-0 Petes!#GoPetesGo pic.twitter.com/juDXddhyUS

The teams would leave the ice with the Petes holding a significant early lead and edging the 67’s on the shot clock 11-8 after 20 minutes.

A solid first period is in the books 💪#GoPetesGo pic.twitter.com/YN86xfHMW0

The second period would be opened by a fourth Peterborough goal and the second of the night for Kirk who was assisted this time by Merkley and Brady Hinz.

A few minutes later, the 67’s ended the onslaught of Cranley and broke Hunter Jones’ shutout bid with a rocket from Jack Quinn courtesy of Lucas Peric to finally get on the board 4-1.

Ottawa’s second goal of the night would come moments after, courtesy of Tye Felhaber off of a tip by Mitchell Hoelscher, and with five minutes remaining in the period the visiting team got back within one goal as Quinn scored his second of the night assisted by Yanic Crete and Sam Bitten, making it 4-3 Peterborough.

Peterborough would regain their two-goal lead, making it 5-3 with 1:35 left to play thanks to Timleck’s second of the night from Hinz and Merkley. Timleck was extra-exuberant, as he also drew the penalty that lead to the goal, requiring a quick-fix by Petes Head Trainer Brian Miller.

The third was punctuated by yet another early goal from a member of the Maroon and White as Cameron Butler received an assist from Parker-Jones to give the Petes a 6-3 advantage.

After a strong final period particularly for the home team, the Petes went home for the holidays with a 6-3 win. Final shots were 34-21 in favour of the 67’s.

The Petes will be back home after the holidays following a trip to Kingston on December 28th to face the Mississauga Steelheads at 7:05 PM on Saturday December 29th as their last game of 2018, Tickets for that game are available through the Collins Barrow Box Office in person, over the phone at (705) 743-3561, and online.