Petes Remain Undefeated Against the Bulldogs 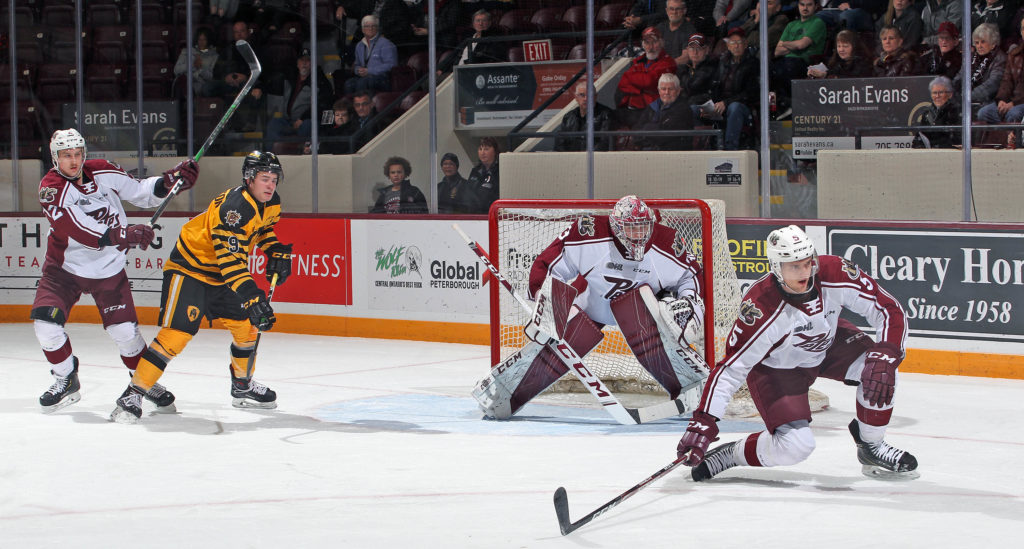 The Petes got off to a great start in what will be their third consecutive three-in-three weekend thanks to a Mason McTavish hat trick and strong performance from netminder Tye Austin, defeating the Hamilton Bulldogs 7-4 on Thursday night.

The Petes responded quickly as John Parker-Jones deflected Jacob Paquette’s shot for his career-high fourth goal of the season, 19 seconds later. Rookie Tucker Robertson registered his seventh assist of the year on the tying goal.

BONES! @ParkerJones777 redirects a @j_paquette6 point shot past Costantini to tie the game just 19 seconds later! Nice pass out of the corner from @Robertson_62 for the second assist. It’s 1-1!#GoPetesGo pic.twitter.com/beKqONHD1n

Less than two minutes later, Mason McTavish one-timed Cameron Butler’s feed past Marco Costantini for his 16th goal of his rookie year. Butler and Max Grondin picked up the assists on the leading 2-1 goal.

Moments later, a delayed penalty against the Bulldogs allowed Nick Robertson to jump on the ice as the extra attacker. On the play, Hudson Wilson passed the puck to Robertson, who used his lethal wrist shot from the point to beat Costantini high blocker side to give the Petes a 3-1 lead.

ROBBY! @nickrob2001 takes to the ice on a delayed Hamilton penalty and makes his presence known with a blue line blast! @hudson_wilson18 and @McMulley17 combine for the helpers. 3-1 Petes!#GoPetesGo | #LeafsForever pic.twitter.com/z1sEOcmRBr

Later in the period, Tag Bertuzzi fired a shot on Austin and converted on his own rebound cut the Petes lead 3-2.

Less than two minutes later, LA Kings prospect Kaliyev netted his second of the night to tie the game 3-3.

Before the first period concluded, Paquette made a stretch pass that landed on McTavish’s stick and his backhand gave the Petes a 4-3 lead heading into the second period. Goaltender Austin picked up his second career assist on McTavish’s second goal of the night.

MASE – AGAIN! A streeeetch pass from @j_paquette6 finds @masonmctavish27 and the Petes retake the lead! @tye32austin gets his second career point with a HUGE stop at the other end. 4-3 Petes!#GoPetesGo pic.twitter.com/5IHzuCaudf

After the first 20 minutes, the Petes lead on the score board but were trailing in shots 13-11.

The second period was almost scoreless until Nick Robertson made a no-look back handed goal to give the Petes a 5-3 lead short handed. Robertson’s 23rd goal was assisted by Captain Zach Gallant and Wilson picked up his second helper of the night.

Just like the first intermission, the Petes were ahead on the scoreboard, but trailed in shots 29-23.

Leading by 2 after 40 minutes the Petes are.#GoPetesGopic.twitter.com/hOh5rN4KE2

A hooking infraction against the Bulldogs allowed the Petes’ sixth overall power play line to take the ice five minutes into the third. While having the man advantage, Gallant fired a shot behind the goal line and the puck rolled past Costantini as the Captain netted his 16th goal of the year. The odd bounce gave the Petes a 6-3 lead and Nick Robertson picked up his second assist of the night on the play.

With five minutes left in game, McTavish netted his first-career hat-trick as his back hand found the back of the net to give the mighty Maroon and White a 7-3 lead.

In the final seconds of the game, Bulldogs’ Ryan Winterton beat Austin to cut the Petes lead 7-4 on the power play but it wasn’t enough as Peterborough remains undefeated against the Bulldogs this season.

Final shots were 43-33 in favour of the Bulldogs. McTavish, Nick Robertson, and Austin were named the game’s First Choice Haircutters first, second, and third stars of the game. The Mark’s Hardest Working Pete was Jacob Paquette.

The Petes continue their three-in-three weekend as they travel to Oshawa to take on the rival Generals at 7:35 pm on Friday, December 13. The Petes will return to home ice on Saturday, December 14 as they battle the Niagara IceDogs at the PMC at 7:05pm.