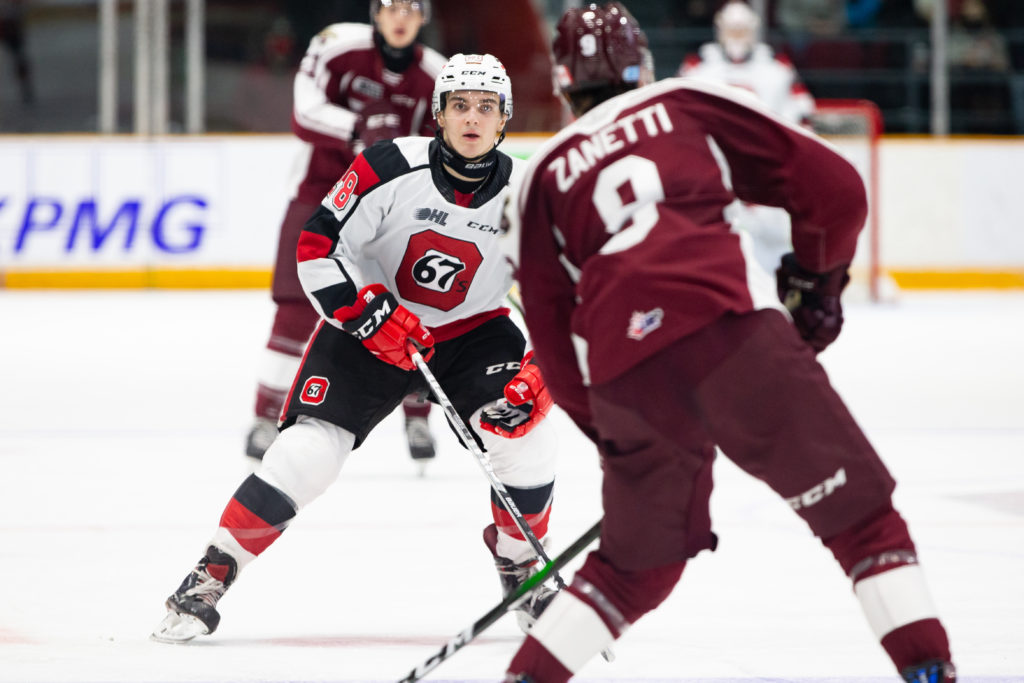 Tye Austin stopped 28 shots to pick his first win of the season while seven Petes recorded multiple points in a 9-3 victory in the nation’s capital. Tucker Robertson led the afternoon with five points (1G, 4A) while Emmett Sproule recorded four points (1G, 3A) to extend his point streak to OHL-leading 17 games as the Petes snapped their two-game losing skid.

Peterborough rolled into the Nation’s Captial ready to play as they scored two goals two minutes apart in the opening five minutes of the hockey game. Philadelphia Flyers prospect J.R. Avon displayed tremendous speed across centre ice and skated on a breakaway. His shot was initially stopped by 67’s starter Will Cranley but Emmett Sproule fired the loose puck for his 8th of the season to extend his OHL-leading point streak to 17 games.

Shortly after Sproule’s goal, Ottawa’s Vsevolod Gaidamak was whistled for hooking, putting the Petes power play unit to work. Samuel Mayer, a L’Original native, fired a wrist shot from the point and somehow beat Cranley glove side for his 5th of the year. Robertson and Sproule picked up the helpers on the powerplay tally.

.@Samuel6Mayer‘s wrister from the point beats Cranley glove side! Robertson & Sproule pick up the helpers on Mayer’s 5th of the season!#GoPetesGo pic.twitter.com/EZZn5ZWIJT

Halfway through the opening period, Ottawa’s Brady Stonehouse beat Pembroke native Tye Austin five-hole to cut our lead in half. If that made you nervous, the Petes were whistled for a holding and delay of game infraction putting Ottawa on a 5-3 man advantage. However, Austin stood tall, stopping all shots but as Robertson hopped out of the penalty box, Sproule forced a turnover at the Petes blueline and sent a feed to Robertson who fired the puck in the open net for his 15th of the season.

The maroon and white didn’t slow down in the middle frame as they came out generating chances against a tired 67’s squad. The Barber Poles couldn’t maintain chances and pucks kept bouncing against them, as we see with Keegan McMullen’s goal! His third of the season was assisted by Kaspars Ziemins and Jax Dubois.

Ottawa thought they were getting their big break when Brenden Sirizzotti deflected a point shot past Austin to cut the Petes lead, 4-2, but little did they know, it was the opposite. Joe Carroll wasn’t happy with Ottawa’s goal and his next shift, he unleashed his smooth hands across centre ice and sniped his 6th of the year. Mayer and Robertson picked up the helpers on the goal.

Carroll flips the puck over a defenceman, uses his speed to enter the zone, and snipes the puck high on Cranley for his 6th of the season 🎯#GoPetesGo pic.twitter.com/IlCsIFqlUi

Just before the second period expired, Sam Alfano squeaked the puck past an Ottawa defender and Avon picked up the loose puck and fed a back-hand pass to Justin DeZoete, who was all alone out front. DeZoete’s third of the season gave Peterborough a comfortable 6-2 lead heading into the third!

#BringItToBroad prospect @Avonjr_1010 sends a beautiful feed to Justin DeZoete who makes no mistake in front for his 3rd of the season!#GoPetesGo pic.twitter.com/W3nMB2gWtg

Peterborough came out strong in the third, with a mission to hand the 67’s their third straight loss. Petes sixth overall pick in the 2021 OHL Priority Selection Nick Lardis tallied two goals (7, 8) to rank third in OHL goals amongst rookies while Avon banked in a beautiful tic-tac-toe goal to secure a win in Ottawa!

.@NickLardis91 jumps into the 3rd place in OHL goals amongst rookies with his 8th of the season 🔥#GoPetesGo pic.twitter.com/QFlIT0iTEJ

The final shots were 31-27 in favour of Ottawa. Robertson, Sproule, and Avon were named the game’s first, second, and third stars.

The Petes are back in action on Thursday, November 25 against the North Bay Battalion. Mason McTavish. is expected to make his 2021-22 OHL appearance, so get your tickets today!