Petes Score Four in the Third to Shut Out Spirit 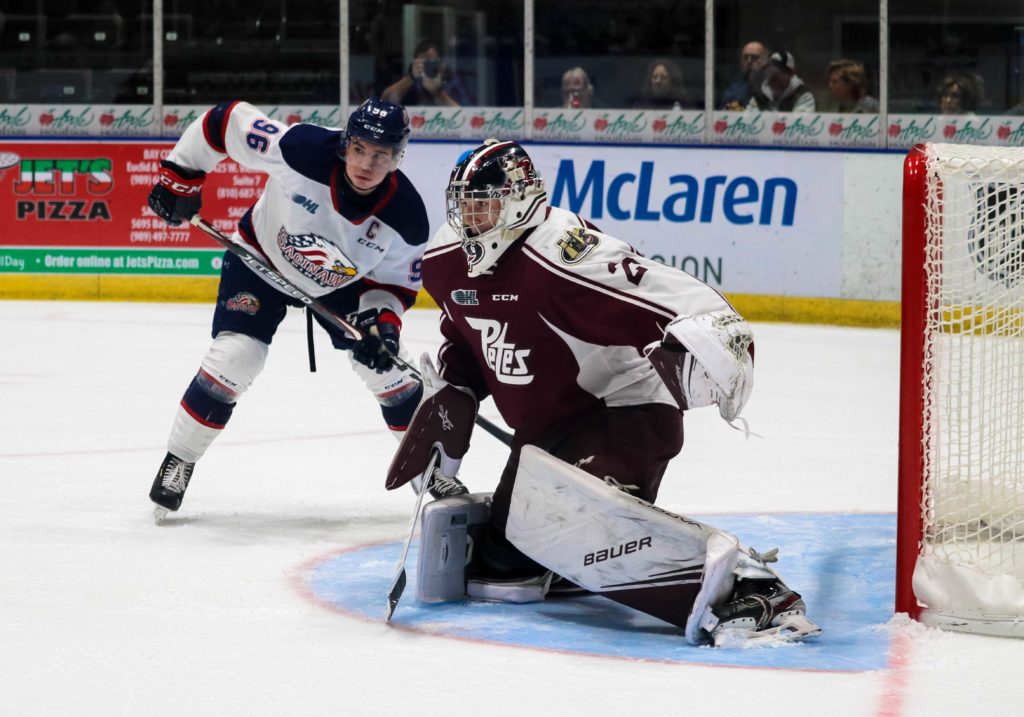 After a scoreless 40 minutes, the Peterborough Petes erupted for four answered tallies in the final frame to shut out the Spirit in Saginaw on Wednesday night.

Peterborough’s only visit to Saginaw got off to a sluggish start for both clubs, with only four combined shots in the opening ten minutes of the contest.

Saginaw was the first to the power play 13:36 into the game. After a successful penalty kill, back to back infractions by the Spirit sent the Petes on the man advantage for nearly four minutes during which they couldn’t capitalize.

As has been the case three times already this season, the Petes found themselves in a tie after the opening frame.

This little fun fact worked for us last time so we’re gonna try it again:

The Petes are 3-0-0-0 when tied after the first period!#GoPetesGo pic.twitter.com/WS4NWiOtXw

The second stanza was as familiar as the first with the score sheet being marked only by penalties – three by the Petes and two by the Spirit, with offsetting minors rewarding just Saginaw with a power play.

Each team’s best chance of the night came midway through the period as they exchanged odd man rushes that goaltenders Hunter Jones and Tristan Lennox were quick to halt.

Goose eggs remained on the board after 40 minutes.

Then the Petes came to life.

The maroon and white exploded for four third period markers, earning Jones his first shutout of the season and fourth of his career.

The puck had eyes coming off of Cameron Butler’s stick thanks to a clean face off win and pass from Zach Gallant 1:34 into the final frame.

BUTSY! A clean win off the draw by @zachgally and back to @CButler_21 at the top of the circle to FINALLY get on the board! It’s 1-0 Petes!#GoPetesGo pic.twitter.com/w9c67L6TAM

Rewarded with another power play opportunity, it took the Petes just five seconds to convert as Liam Kirk netted his fifth of the campaign to extend Peterborough’s lead to 2-0, with help from Nick Robertson and Declan Chisholm.

CHANT YORKSHIRE 🇬🇧! @kirky_1424 tips a perfect pass from @nickrob2001 past Lennox to make it 2-0 Petes! @chis_decs with the second assist.#GoPetesGo pic.twitter.com/Gy2VRX6YaT

Mason McTavish jumped up to second in league rookie goal scoring at 9:39, putting away his fifth of the year while Kirk and Chisholm recorded their second points of the game.

TAVY! @masonmctavish27 with a slick redirection off a @kirky_1424 pass! 3-0 for the visiting Petes!#GoPetesGo pic.twitter.com/T1jsDxUnPh

Robertson lengthened his goal scoring streak to all seven games of the season, adding his ninth with 2:19 left to play.

ROBBY! @nickrob2001 extends his scoring streak to 7 games after stripping the Spirit of the puck! That’ll all but do it – we’re up 4-0! SDA picks up a helper on Robby’s 9th of the season.#GoPetesGo pic.twitter.com/oqlNFyhz2Y

Final shots were 23-20 for Saginaw, with Peterborough winning 54% of the face offs. The Petes were 1/5 on the power play and perfect on the penalty kill.

The Petes continue their lengthy road trip on Friday, October 11 at 7:05pm as they visit the Sting in Sarnia before facing the Flint Firebirds at 7:00pm on Saturday, October 12.

Catch the Lift Lock Lads in action on home ice with a Season Starter Pack and save over $65 on tickets and merchandise by clicking here.