Petes’ Season Comes to an End in Oshawa 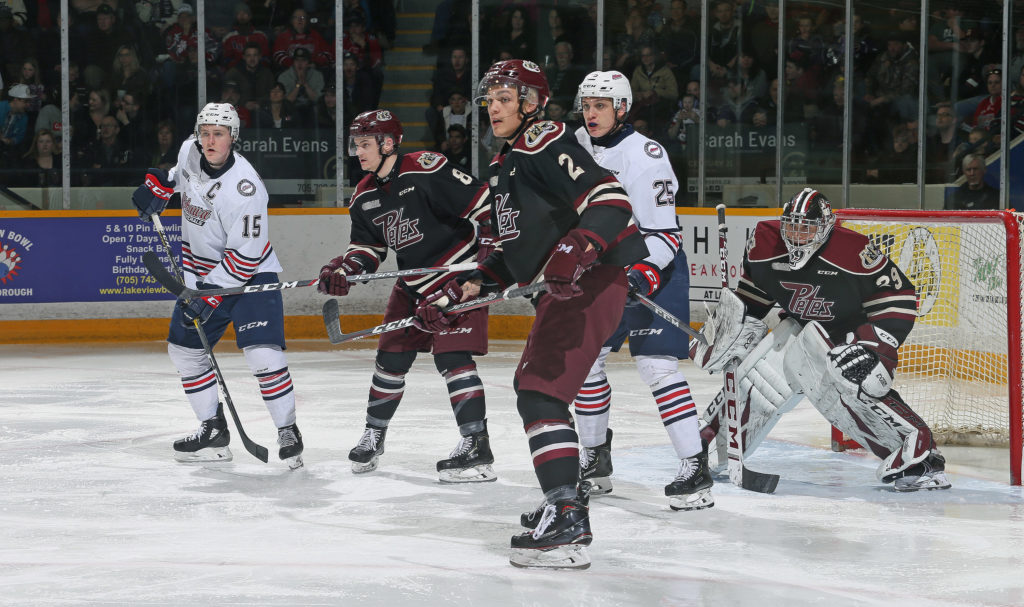 The Peterborough Petes made their way down the 115 and 401 on Saturday night for a must-win game against the Oshawa Generals. Despite out-shooting their division rivals, the Generals took the game by a score of 4-2, and the Eastern Conference Quarter-Final series 4 games to 1.

The Petes would open scoring for the second consecutive game, but did so shorthanded. The maroon and white found themselves down a man early and with the top penalty killing unit on the ice, captain Zach Gallant picked up a turnover and fired the puck past Kyle Keyser just 1:47 into the game.

O CAPTAIN! MY CAPTAIN! @zachgally forces a turnover in the Oshawa zone while on the PK and beats Keyser! It’s 1-0 Petes!#GoPetesGo | #LGRW pic.twitter.com/n5KrWVvNTP

A handful of infractions were handed out to both teams by the officials in the late minutes of the frame, with one of them proving to be damaging for the Petes.

Anthony Salinitri carried the puck into the zone and headed behind Hunter Jones’ net. Instead of taking the puck with him, he backhanded a pass to Serron Noel on the doorstep who had a wide open net.  The home team tied the game at 1 with 2:10 remaining in the period.

The game was balanced not only on the score board, but in the face-off circle as well with Peterborough holding a slight lead in shots through 20 minutes of play.

This one’s been exactly what you’d expect between these rivals so far! All tied up after 20 in Oshawa.#GoPetesGo pic.twitter.com/WeXzzGk8an

Peterborough started the second stanza with 4:40 remaining on a power play that was carried over from the first period. They managed a handful of shots, but weren’t able to convert on the man advantage.

Oshawa would take their first lead of the evening 7:52 into the second. Brett Neumann picked up the puck skating out of Oshawa’s end along the boards. Once across the blue line, he chipped the puck to Cole Resnick who beat Jones over his left shoulder with a quick snap shot.

A skirmish between the rivals resulted in a Generals power play. Chris Paquette nearly added his club’s second shorthanded marker but was stopped by Keyser. On his next attempt, Paquette was tripped up in front of the net, drawing a call for Oshawa.

The Petes were able to capitalize on the ensuing power play as Gallant was credited with his second of the night, while Declan Chisholm and Ryan Merkley earned assists. The game-tying goal came at 12:09.

GALLY! First a shorty and now a power play marker for @zachgally as he redirects the puck off of a Gens’ defender! @chis_decs picks up an assist. We’re tied at 2!#GoPetesGo | #LGRW | #GoJetsGo pic.twitter.com/VcR0j7ZoWQ

Penalties were beginning to prove costly for Peterborough as Oshawa’s second go-ahead goal was also their second power play marker.

Salinitri started and finished the play by bringing the puck into the Petes’ zone. He dropped the puck for Allan McShane who dished to Brandon Saigeon getting the puck back to fire a shot on Jones. The rebound landed on Salinitri’s stick and he beat Jones blocker side to bring the score to 3-2 in favour of Oshawa at 18:07.

The Petes still controlled the shot clock after 40 minutes, but were trailing where it counts most.

Peterborough would need a big final frame but were slowed in their attempt at getting things going as they started the third on the penalty kill. The Petes were able to hold the Generals off through that penalty and another just before the mid-way mark of the period.

Jones was pulled from his net with 1:25 remaining in the game in order to add an extra attacker, but instead Kyle MacLean added an empty netter to secure Oshawa’s 4-2 victory and 4-1 series win.

Salinitri, Gallant, and Keyser were named the first, second, and third stars of the game, respectively.

To our fans that traveled to Oshawa every game – your cheers and support didn’t go unnoticed! #GoPetesGo pic.twitter.com/CAioWoIu9w

Season Ticket Members that purchased tickets for game six on Sunday will automatically receive credit on their account. Should a refund be preferred, please visit or contact the Baker Tilly Box Office at (705) 743-3561.

The Petes now turn their attention to the OHL Priority Selection on Saturday, April 6. The maroon and white hold 17 picks in the 15 round draft, including 4 picks inside the top 29.