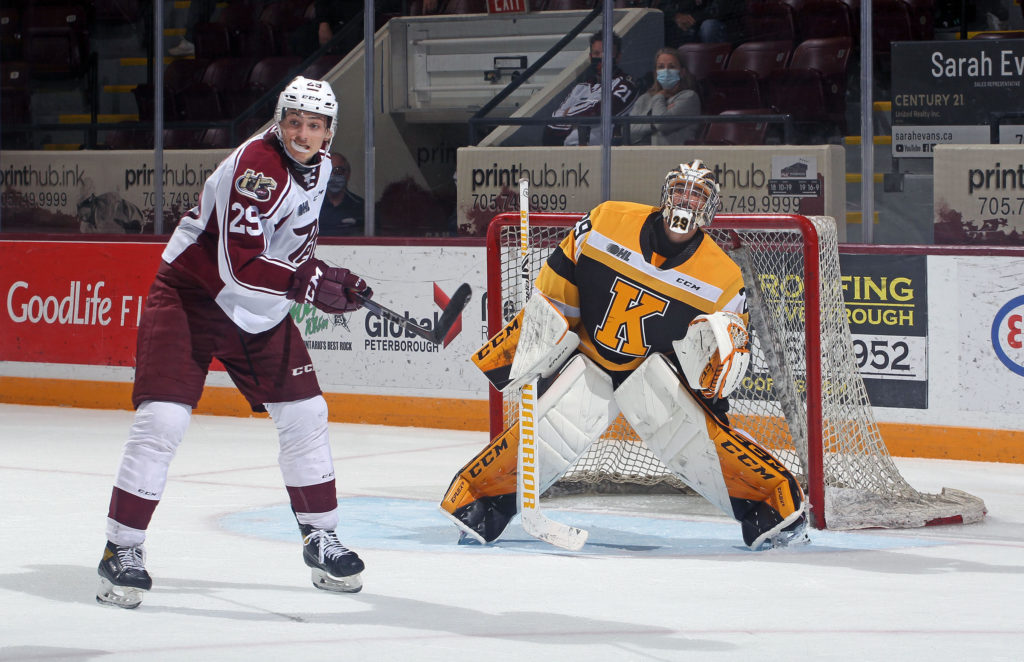 The Peterborough Petes (1-2-0-0) earned their first win of the season Thursday night. They will look to add another victory on Saturday night when the Kingston Frontenacs (1-2-0-0) visit the Peterborough Memorial Centre.

The Petes enter the weekend after beating the Sudbury Wolves in a tight, emotional game that saw starter Tye Austin leave with an injury. Michael Simpson stepped in and Tucker Robertson led the team to a 5-3 victory.

Blink and you'll miss it!

Tucker Robertson lasers the puck past Weeks for his second tally of the season! Artem Guryev and @Emmett9393 pick up the helpers on the tying goal 🚨#GoPetesGo | #GameON pic.twitter.com/BgSswZaKaa

It had been 19 months since the Petes played in front of their home crowd.

“I missed it so much during the 19 months off,” Robertson said following the game. “ To see all the people in the crowd cheering for us was an awesome night. We needed a win badly. I knew we’ve been playing all right and everyone has been saying we’re young but I don’t really care about that. I want us to be a really good team.”

Robertson is currently tied for second in points in the OHL He has two goals and four assists in three games. Kingston’s highest point producer is Lucas Edmonds with three goals and two assists.

WHAT A SHORTY FROM @McMulley17 🚨

Robertson picks up the helper on Keegan's first of the year! We've got a 2-2 hockey game! #GoPetesGo pic.twitter.com/suN1ualGuE

Despite their record, the Frontenacs are still ranked ninth in the top 10 in Canadian Hockey League rankings.

“It’s nice to be recognized but we don’t pay any attention at all to the rankings. Our only concern is what we do on a daily basis to be a better hockey club,” Head Coach Luca Caputi said.

The teams are tied offensively at 12 goals for, but the Petes have been scored on more often (16-11).

The Petes hold an edge in special teams. Peterborough has drawn more power play chances than any other team in the OHL. J. R. Avon, who contributed two assists last night, drew penalties including a power play that led to the game-winning goal. The maroon and white have converted 4 of 20 opportunities (20%) while the black and gold are 3 for 16 (18.8%).

Robertson’s six points leads Peterborough offensively. Emmett Sproule registered his first game-winning goal against Sudbury on Thursday to boost his total to three goals and five points. Avon enters Saturday night with two goals and three assists across his stat line. Defenceman Samuel Mayer picked up an assist on Thursday night that increased his assists to two. He has collected one goal and two assists through three games played.

Kingston has one of the most skilled upcoming forwards in the game in Shane Wright. Sports Illustrated calls him “The Total Package.” Joining the Frontenacs at 15 years old, Wright received exceptional status from the OHL in 2019. Ever since, the now 17-year-old is playing to his potential. He is tied for second with two other forwards for most points on the team. Wright comes to the Centre with two goals and two assists in four games. Left-wing Francesco Arcuri registers the same numbers while rookie center Paul Ludwinski has produced one goal and three assists over three games.

FRONTENACS: C, Shane Wright
Wright has speed, strength, and a wicked shot. He outplayed everyone on most nights at the IIHF World Under-18 Hockey Championship earlier this year, racking up 14 points in five games. His OHL totals are 41 goals and 29 assists for 70 points across 61 games.

PETES: C, Tucker Robertson
Robertson had a big Thursday night. In total, he posted one goal and three assists. He changed the momentum of the game on Thursday, October, 14, scoring 22 seconds into the second period and making a diving pass to Keegan McMullen that led to his short-handed goal. Robertson was seen on the score sheet for the Petes’ first four goals. If he plays like that again against the dynamic players on Kingston, then Peterborough can pick up their second win of the season.