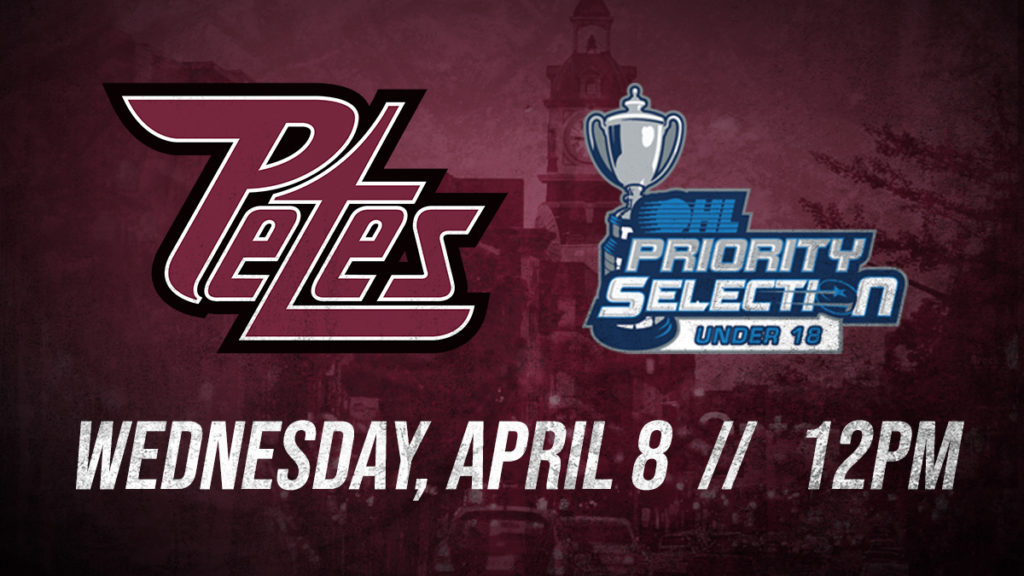 The Peterborough Petes selected three players in the 2020 OHL Under-18 Priority Selection on Wednesday, April 8, 2020.

In the first round, with the 15th overall pick, the Petes selected Samuel Mayer of the Hawkesbury Hawks. The 6’2”, 184lbs 2003-born rearguard, who served as his team’s captain and was a finalist for the Hockey Eastern Ontario Midget AAA Defenceman of the Year, had 9 goals, 17 assists, 26 points, and 104 penalty minutes in 40 games. He also appeared in 5 games with the Hawkesbury Jr A Hawks.

With our first pick in the 2020 #OHLU18Draft, the Petes are excited to select Samuel Mayer from the @HawksU18!#GoPetesGo pic.twitter.com/TSmdrPTNS0

“Samuel is a big, physical kid who is very tough to play against,” detailed Petes Major Midget/Junior A Scout Brian Errey. “He’s not afraid to force the play at both blue lines and is able to sprinkle in a bit of offence and jump into the play.”

In the second round at 35th overall the Petes selected Lucas LaPalm from the Peterborough Major Midget AAA Petes. The 5’10”, 160lbs 2003-born right winger recorded 16 goals, 23 assists, 39 points, and 32 penalty minutes in 35 games this season.

“Lucas competes in all three zones and never takes a shift off,” added Errey. “He reads the play very well, often anticipating and forcing turnovers.”

“We’re excited to have added Samuel and Lucas to our organization through this year’s Under-18 draft to give us additional depth,” commented Petes General Manager Mike Oke. “We expect them to compete for a full-time spot on next season’s roster.”